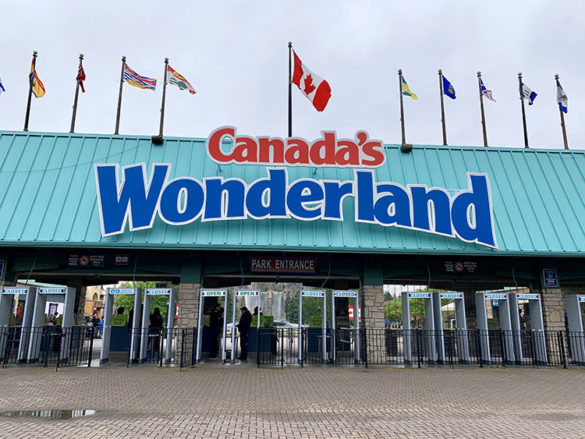 Last month, we made our way to Toronto. We had one main goal — to ride the brand new Yukon Striker roller coaster! We visited on a rainy day which made things a little less than ideal, especially for our anxiety and obsessive compulsive disorder (OCD). Still, we had the time of our lives. We asked ourselves, “how scary is Yukon Striker at Canada’s Wonderland?” and lived to tell the tale!

Yukon Striker at Canada’s Wonderland is the tallest, fastest, longest dive coaster in the world. It opened in 2019 and features a 90 degree drop, four inversions, and reaches a maximum speed of 81 mph. It’s the newest addition to the theme park located just outside Toronto in Vaughan, Ontario.

Honestly, it blows my mind that this is my life now. I had to work so hard to overcome fear on roller coasters. Now, I’m reviewing some of the world record breakers! This time, it was a monstrous dive coaster in my native Canada. Let’s talk a bit about visiting the park and then we’ll answer the question — how scary is Yukon Striker?

How To Visit Canada’s Wonderland

Canada’s Wonderland opened in 1981, which means it was pretty new the first time I visited in 1986. It’s located in Vaughan, Ontario and is about a 40-minute drive from downtown Toronto. Planning a roller coaster tour? We did Cedar Point in Sandusky, Ohio just the day before and it’s less than a six-hour drive between the parks. We even stopped at Niagara Falls along the way!

If you’re a fan of Cedar Fair parks (we are!), like Cedar Point, King’s Dominion, and Carowinds, you’ll be happy to know that Canada’s Wonderland is the only Canadian property in that group. That being said, it doesn’t necessarily run as smoothly as the others.

Having grown up in Canada with La Ronde in Montreal as my home park, I can say we’re just not great at park efficiency. Josh’s anxiety is triggered by inefficient lines — whether it’s at the grocery store, the TSA checkpoint or an amusement park — so this was a bit of a drag. Either way, it was exciting to get past the turnstiles and actually enter Canada’s Wonderland!

It’s Canada, so don’t count on the glorious weather you’ll find at Carowinds. You definitely want to check the park calendar for the most up-to-date hours of operation. Also, the season might start a little later than you’d expect, so keep that in mind, too.

Here are some links to Canada’s Wonderland resources:

Unlike Cedar Point, you won’t find an official hotel for Canada’s Wonderland, which can be frustrating for out-of-town guests. There are plenty of places to stay in the area. If your sole purpose is visiting the park, we’d suggest skipping Toronto (even though we stayed at The Ritz-Carlton Toronto Downtown!). It might not seem that far, but with traffic, it’s a long commute. Stick with something in the Vaughan area.

You’ll find a lot more than thrill rides at Canada’s Wonderland. There’s a full indoor arcade, for example, where we ended up taking refuge when the weather got crazy. Plus, you’ll also notice some great food options. As a Canadian, I could have stopped and eaten everything in sight (give us all the poutine)! Josh almost gave himself whiplash when he spotted Beaver Tails! At least we can get them at Lagoon in Salt Lake City!

Should your plans include a full day at Canada’s Wonderland, you might want to invest in one of the dining bundles. We all know theme park food can get pricy! If you’re like us, you love having photographic proof of your roller coaster adventures, so definitely check out the FunPix packages.

Okay, now that we’ve talked about Canada’s Wonderland, let’s get to why we’re all here — how scary is Yukon Striker? That’s the question we wanted to answer when we made our way to the park. There are just four dive coasters (vertical drop of 90 degrees) in North America, and by the time we queued up for Yukon Striker, we’d ridden two.

Just look at the theming on this bad baby. Some rides really look so basic, but Canada’s Wonderland made a real effort with this one! Before we talk about ride experience, let’s look at the specifications of the Yukon Striker, which was engineered by B&M in 2019: 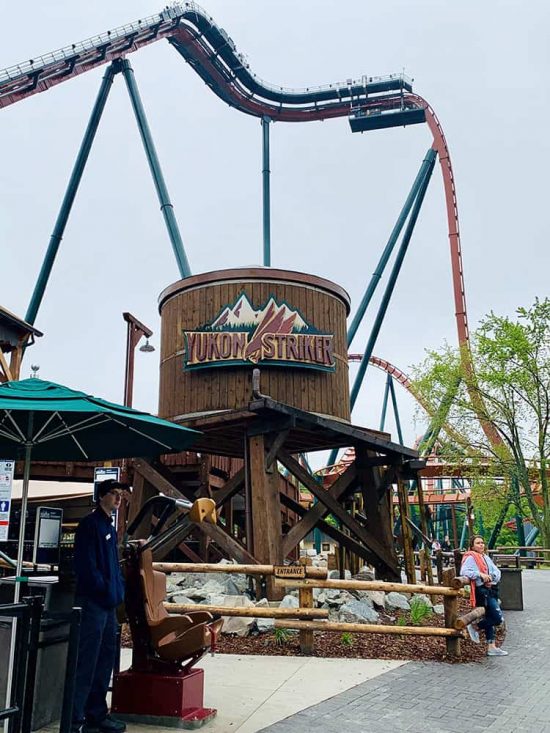 How Does Yukon Striker Compare to Other Dive Coasters?

If we’re going to determine how scary Yukon Striker is, we need the bigger picture. Griffon at Busch Gardens Williamsburg was engineered by B&M in 2007 and includes a 205-foot drop. It reaches a max speed of 71 mph and features two inversions. When it opened, it held the record for tallest, fastest dive coaster. Sheikra, its sister at Busch Gardens Tampa, was is the original and was built in 2000, with a height of 200 and max speed of 70mph.

Over at Cedar Point, B&M created Valravn in 2016. It includes a drop height of 214 feet, max speed of 75mph and three inversions. Fun fact — the track spells Ohio! It was smooth and swooping, and an absolutely great ride. It definitely set the bar high for Yukon Striker, but I had faith that my native Canada could pull it off!

Yukon Striker features a rubber, over-the-shoulder harness system similar to the one on The Flying Dinosaur at Universal Studios Japan. It felt simultaneously comfortable and secure, and I hope more rides adopt this in the future. We even prefer these to plain lap restraints. 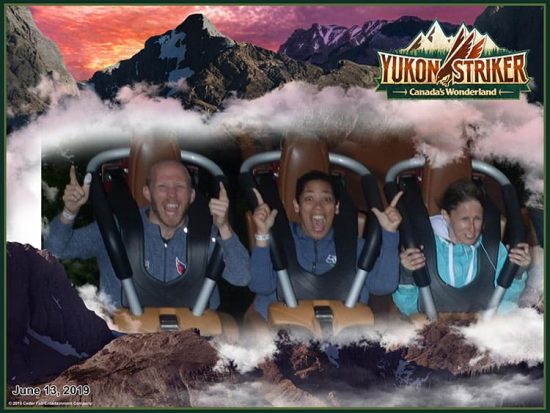 You still get the freedom to flop around without feeling overly exposed. Truth be told, I wish that Cannibal at Lagoon, one of my favorite rides, would adopt these harnesses. The main reason some people I’ve talked to hate the ride is because they don’t feel safe. I’m all for lap bars (love them on Top Thrill Dragster, for example!), but you need to feel confident when you’re on a ride!

What Does The Drop Feel Like on Yukon Striker?

Okay, so dive coasters drop 90 degrees straight down, so by design, you’re going to really feel these drops in the pit of your stomach. The wind hitting you in the face may make it hard to breathe. When you get past this moment, though, many people find this type of roller coaster exhilarating.

Compared to Griffon and Valravn, the drop on Yukon Striker is way more extreme. You’re dropping from much higher and the speed is significantly faster. There was a moment when I genuinely asked myself if the drop was ever going to end because it went on FOREVER. Fortunately, it didn’t suck!

One thing of note, and I’m not sure if it was just my experience, but the pause before the drop on Yukon Striker felt a lot shorter than the others. I would have liked to dangle for a little longer before plunging down through that tunnel, but it was still amazing!

The Best Things About Yukon Striker

Overall, riding Yukon Striker was incredible! It felt heavy and sturdy, which are two things we love in a coaster. In an article I wrote on Forbes, I described it as “majestic” and “confident” because this is a ride with identity. There’s no confusion about what it’s doing or where it’s going. The Yukon Striker is now the king of the dive coasters and we are here for it! These are the things we loved most:

Is Yukon Striker scary? Definitely — even if you’ve ridden other dive coasters. While it was completely enjoyable to us, make no mistake, it’s an intense ride. In fact, when we queued up again, we saw a young man vomiting everywhere after returning to the loading platform. When asked whether this was common, a ride operator said it happens every day!

Are there other things to do at Canada’s Wonderland? You betcha! You’ll find a solid lineup of thrill rides, attractions and other roller coasters. We wish it hadn’t been so rainy on the day that we visited because there were a lot of things we would have liked to do. Oh well, we’ll just have to plan another trip!

We did spot The Mighty Canadian Mine Buster, which happens to be my first wooden coaster! We didn’t get to ride it that day due to the rain, but it was still nice to see it across from the Yukon Striker! Maybe it will get a boost in traffic 🙂 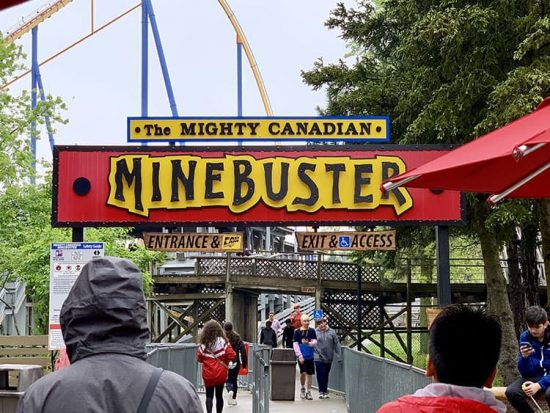 While we thoroughly enjoyed Millennium Force at Cedar Point, I skipped its giga coaster sister, Leviathan. Yes, I’m bringing up the rain for a millionth time, but there was just no way that I wanted to get on that kind of ride in a storm. Plus, having just been at Cedar Point the day before, I was a little burnt out.

Instead, Josh rode it alone and ended up being on the last car before they closed it. Why did it get (temporarily) shut down? Heavy rain, of course. Not only did he spend the entire time shielding his face, but he actually had a bloodshot eye for several days from being hit by droplets!

The weather in Canada is harsh, and the Toronto area sees a lot of snow. As a result, the rides look a little rusty and run down. That doesn’t mean they aren’t still super fun (or that they aren’t well maintained), but Canada’s Wonderland just doesn’t look as vibrant as the other Cedar Fair parks (we’ve visited Cedar Point and Kings Dominion, so far).

Yukon Striker Is Worth the Trip!

Despite the fact that seeing someone vomit was tough for someone with travel anxiety and OCD, we had a great day. If you find yourself in the Toronto area, definitely make your way to Canada’s Wonderland. Even if you’re just going to experience Yukon Striker, it will be worth the trip. 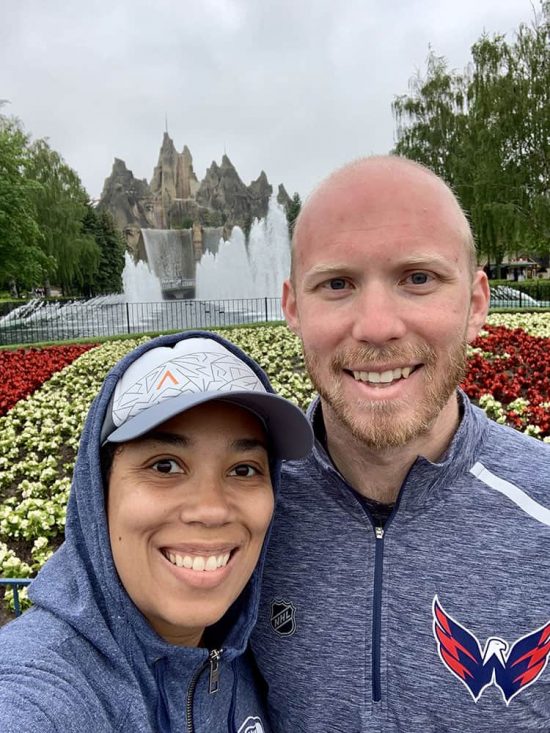 There is plenty to do (even if it’s drizzling) and the Yukon Striker is a can’t-miss roller coaster! You want those bragging rights, don’t you? While you’re there, make sure you grab a Beaver Tail and a poutine — just don’t do it before getting on the rides!

Pin It for Later 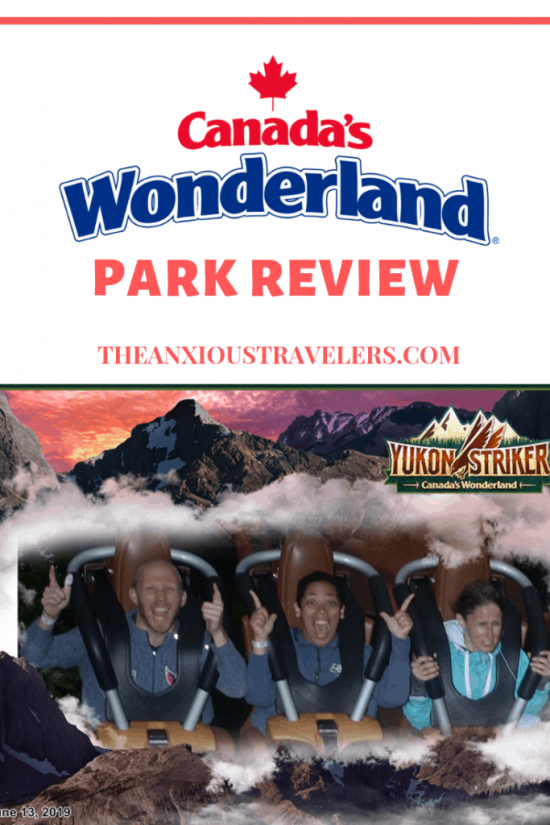