Yoshinoya USA Review: How Does it Compare to Japan? 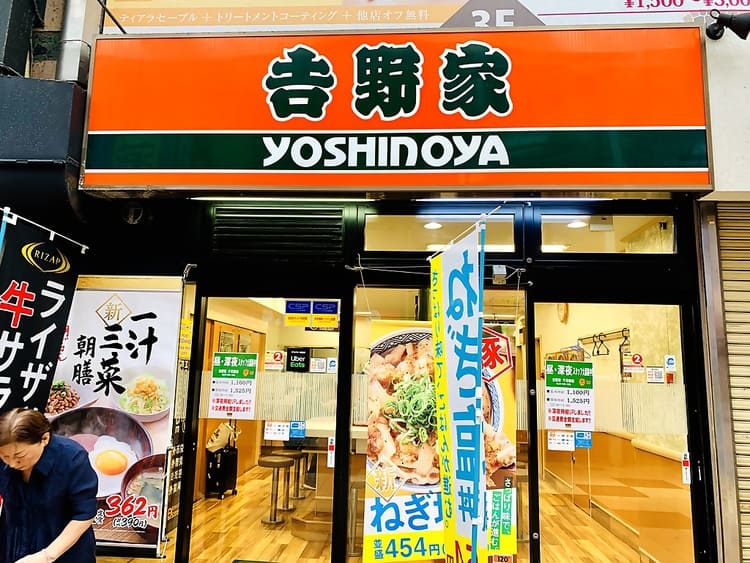 We could barely believe our eyes when we spotted a Yoshinoya right after leaving LAX. Slightly worn out from our first flight since the pandemic began, I almost thought I was hallucinating. How did I not know there was a Yoshinoya in Los Angeles? We knew that we’d have to try it — but would it be any good? Read on for our Yoshinoya USA review!

We traveled to LA for the BTS concert and made pit stops in both Koreatown and Little Tokyo. I’m so jealous we don’t have anything like that here! Having grown up in a major city, I still haven’t accepted some parts of life in a small state…sigh. Anyway, let’s get back to Yoshinoya!

To say that we love Yoshinoya in Japan is an understatement. Yes, we have a bit of a love/hate relationship with the gyudon beef, but that’s part of the charm. It’s such an iconic, beloved Japanese chain and it was the first real meal Hayley had after we landed in Osaka. The picture below is of a location in Dotonbori and introducing her to this chain is one of my favorite memories from a truly wonderful trip.

Yoshinoya in Japan is more like a diner. While more modern or fancier locations exist, many of them feature a counter where you hop on a stool and dig into your bowl of goodness surrounded by strangers. You’ll find pickles, utensils, seasonings, and condiments as well as menus and information about promotions. Like virtually every restaurant in Japan, they make it easy to pick your meal by providing fantastic pictures on their menus.

The meat can be pretty fatty, but that’s where all the flavor is. I’m not always a fan of the texture, so we’ve mastered the art of slurping those pieces straight down into our stomachs. The taste of that bowl, though? AMAZING. It’s worth it and I would eat there once a week if I could. It’s a little messy and soupy. You might even feel a little (rightfully?) intimidated, but there’s a reason why so many people love Yoshinoya.

What did sweet little Hayley think of her first meal in Japan? She loved it. It wasn’t just about the food, though. It was about the whole experience. Yoshinoya in Japan has a certain ambiance that’s hard to replicate. From the servers in diner uniforms to the style and decor of the restaurant, it’s just fun and unique.

My oldest daughter was too little to remember because she was so young when she visited Japan, so you can imagine how excited we were when we saw one so close to our Los Angeles hotel. We had our fingers crossed and hoped for the best!

From the outside, it looked like a more industrial, modern take on the traditional Japanese locations. The trademark orange was used just for the name and the building was black instead of the other way around. When we walked in, it felt like we were having deja vu. Not because we were reminded of Yoshinoya in Japan, but because it felt like we’d walked into a Panda Express. It wasn’t terrible, but it just was so different from what we were expecting.

Placing our order was easier in one way because it was in English, but at the same time, it felt like the employee didn’t fully understand the menu. Unlike Japan, there weren’t a lot of pictures of actual dishes (but they did have some of the ingredients) so it was harder to know exactly what to expect. We asked a few questions, but we didn’t really get any clear answers. I wanted to ask the employee if she’d even tried the food!

There were booths and tables around, but with the current pandemic, we decided to take our order back to the hotel. Not a moment too soon either — as we were leaving a guy showed up and he was coughing. Plus, the seating was kind of strange. Maybe it was due to California’s social distancing measures, but everything felt disjointed.

In the end, Hayley and I ordered rice bowls with steak and teriyaki chicken, and Lauren got a veggie bowl. It came with a sauce on the side for each of our orders. When we opened the boxes, we were surprised by how it looked. Then we tasted it. There wasn’t enough flavor to the meat and the chicken was fatty and rubbery. The sauce was okay, but nothing great. It just was a very basic rice and meat kind of meal.

Was it terrible? No. Would I have it again? Also, no. I guess if there were no other options, I’d eat there, and others might enjoy it if they’ve never had real Yoshinoya, but I’d rather find a local Japanese restaurant instead of ordering from this American version of a beloved chain again.