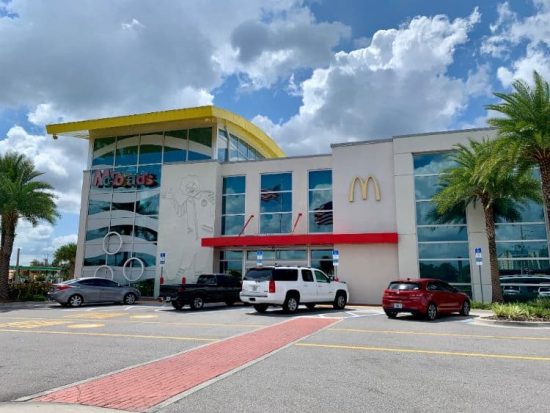 We spotted a behemoth McDonald’s while making our way from Walt Disney World Resort back to our hotel near Universal Orlando Resort. We had to check it out. While Josh made his way over to the restaurant, I did a quick Google search and discovered:

We’ve got to tell you all about what we ordered and what happened when we stepped inside of the world’s largest entertainment McDonald’s. We were completely blown away (watch our video review!)

We weren’t sure what to expect when we opened the doors to the world’s largest entertainment McDonald’s, but we were pleasantly surprised. The restaurant was renovated in 2015 and the lower level is spacious, modern, and we were able to see straight back into the kitchen. As someone who travels with OCD (obsessive compulsive disorder) and germaphobia, it was great to be able to see them preparing the food.  Just look at that pizza oven! 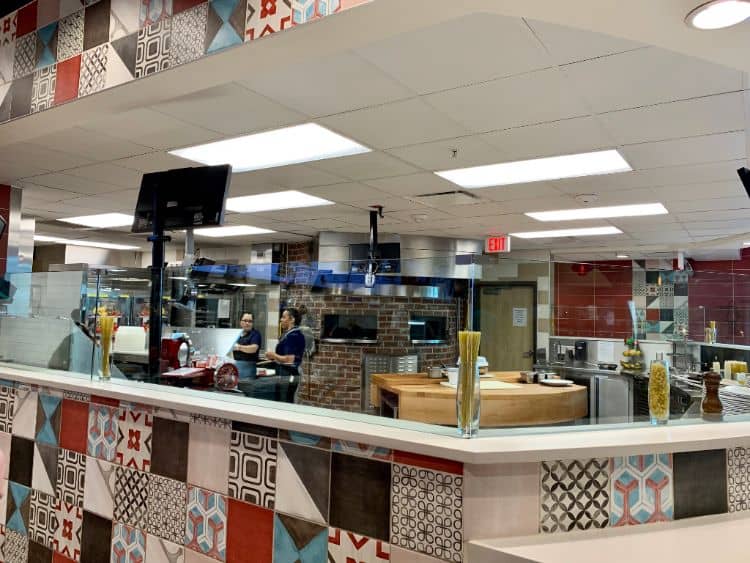 I’d worried that the “entertainment” part of this McDonald’s would be annoying, but if we didn’t know to look for it, we might have missed it entirely. That’s how well designed this location is! While the first floor is dedicated to ordering and eating food, there are actually three stories, including a 22-foot-tall PlayPlace and more than 100 arcade games.

We wish we had unlimited time and money, because we would have tried everything on the menu. Instead, we had to choose items that would work for all of us, because Josh and I were there with Caleb (who was a trooper!). It would have been a whole different story if it had just been the two of us. We’d probably still be there eating! 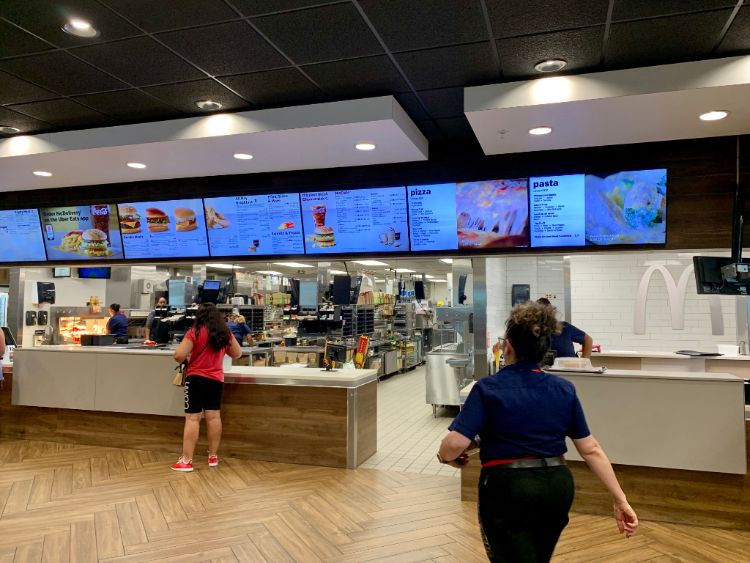 There are more than 50 unique food items on the world’s largest entertainment McDonald’s menu. I’ll say it again — it’s too bad we didn’t have more time to try them all. We’ve talked about it, and if we could go back right now, we’d order the following:

Everything is a little pricier at this McDonald’s, even the regular menu items, so keep that in mind when you head over. It’s really worth it, though! After debating back and forth, here’s what we ended up ordering:

We got the burgers and fries in case we didn’t like the special menu items. Looking back, we should have just waited to see if we liked the pizza and pasta. We probably could have saved some money! In the end, though, we left with super full bellies and a story to tell, so it all worked out!

There are many different noodle and sauce combinations at the world’s largest entertainment McDonald’s, but we wanted to put their Alfredo sauce to the test. Josh and I both love a good Alfredo, so we knew it would be tough to impress us. At the very least, we were looking for something that would be as good as Olive Garden, because let’s be honest, that’s not great Italian food, but I digress… 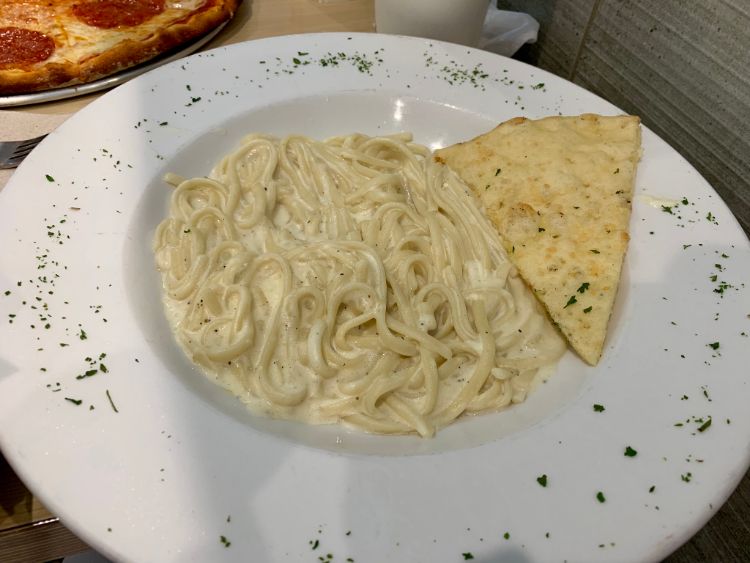 When it was brought to the table, we were very surprised by the size of the portion. The bowl was as big as anything you get at a sit-down restaurant and it came with a side of “garlic bread,” which was really just pizza dough slathered with garlic butter.

The verdict: It was good. We had to add a little salt to the dish to enhance the flavor, which we never do, but it helped! The sauce could have been cheesier and thicker, but it was good overall. Would I order it again? Probably not, but I’d definitely try a different sauce because the noodles were great!

Without any real expectations, we waited for our pepperoni pizza. When it came to the table, we were surprised by both its size and the aroma. We looked at each other and silently agreed to try it before eating anything else — and that was the right decision. 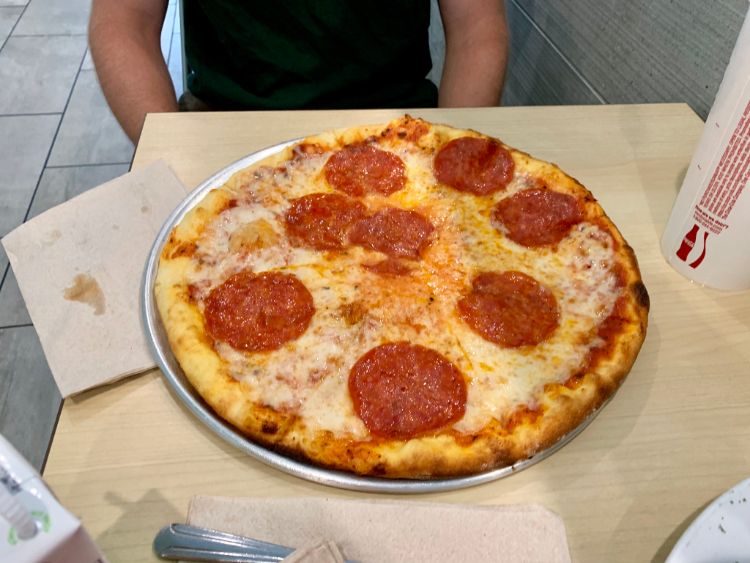 Y’all. This pizza at the world’s largest entertainment McDonald’s was absolutely delicious and Josh made a whole video about how much he loved it. Would we order this again? Yes. Would we eat it all the time if we lived nearby? Also YES!

The crust was thin, pliable, and crispy in all the right places. The sauce was flavorful (which probably means that the spaghetti sauce is good), the cheese was gooey, and the pepperoni was solid. It was a complete shock, and we ended up finishing the whole thing!

While I tend to follow a keto diet for anxiety when I’m home, I do splurge while traveling. This was a fun one! Was it as good as getting poutine at McDonald’s in Canada or Shaka Shaka Chicken at McDonald’s in Japan? I’m not sure I’d go that far.

If you’re in Orlando, however, it’s worth checking out the world’s largest entertainment McDonald’s. It’s clean, relatively recently renovated, and the robust menu is cool to explore. On top of that, the service was truly excellent. One worker would greet Caleb every time she passed by and eventually he blew a kiss to her. Do you know she went and got a bunch of toys for him? It made his day!

This is a great meal choice for families traveling in the area. The parents can try something a little more adventurous while the kids enjoy the familiarity of a Happy Meal. Some families might also enjoy the PlayPlace and arcade, too. We can’t wait to visit again when we’re back in Orlando!