Where to Stay in NYC: Hyatt House New York/Chelsea Review 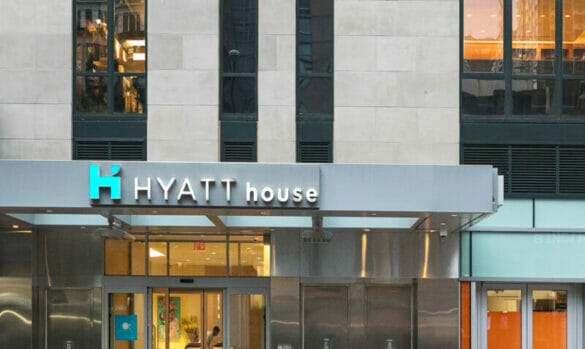 Trying to figure out where to stay in NYC?  One of the best places we’ve stayed is at the Hyatt House New York/Chelsea. The property is clean and feels safe, the views were spectacular, and the location was hard to beat. You’ll be in the heart of one of the best neighborhoods to explore some of the most famous landmarks in New York City!

Truly, this hotel is located in the perfect location, especially for first time visitors to the city. It’s a good value (especially if you get a room with a kitchen) and there are plenty of great restaurants and coffee shops within walking distance.

Located in Manhattan, this extended-stay property is perfect for those who want a little extra from their hotel rooms. The Hyatt House New York/Chelsea kind of feels like a mix between a luxury hotel and a boutique hotel. Our residential suite felt like a small apartment which was really nice after traveling across the country from Idaho. Plus, we had a spectacular view of the Empire State Building and the Chrysler building!

The first thing we noticed when we opened the door was the combination washer/dryer. It’s super handy to have laundry facilities in a hotel room and this was full-sized without taking a ton of space. It was right next to the bathroom, which was convenient.

We were blown away by the fully-equipped kitchen and dining area. Everything felt high-end, so even a germaphobe like me felt comfortable. It was easy to wipe everything down and load up the fridge with stuff we’d need during our adventures. This was a must-have when we were choosing where to stay in NYC.

Our room was a corner unit, so we had huge windows overlooking the city and a nice l-shaped couch for lounging. We also had a flatscreen television, but we never turned it on. We had an entire city to explore! We did, however, take advantage of the free Wi-Fi!

We also had a large window in our bedroom, which definitely felt more like a real bedroom than a hotel. It was furnished with a nice, large dresser, a regular closet, and minimalist (but modern) decor. When we weren’t eating, we were sleeping (we even napped during one glorious afternoon!) so we didn’t get to check out the 24-hour Workout Room. Josh did take advantage of the many popular jogging paths nearby, though!

There’s a complimentary morning spread served daily which currently includes individually-wrapped, pre-packaged breakfast items like hot breakfast sandwiches, yogurt, and fresh fruit. This makes it easy to grab and go while also being more sanitary than a buffet.  For lunch, dinner, and late-night dining, you can check out the H Bar where you’ll find cocktails and appetizers like Korean Street Tacos or the Mediterranean Bowl.

We ate in the many restaurants around New York City, but we did make use of Hyatt House’s H Market where we grabbed quick snacks and cold drinks. You can also buy small groceries (missing ingredients when you’re cooking in your room!) or ready-to-eat sandwiches.

Exhale and World of Hyatt

Need a little rejuvenation on your trip? It’s not on-site but Hyatt House New York/Chelsea is partnered with nearby Exhale. There, you’ll find spa therapies (facials, manicures, and massage) and boutique fitness classes (barre, yoga, cardio) to meet your needs. Don’t want to go to the gym? Use Exhale on Demand to access the classes from your hotel room!

I tried the acupuncture massage, and I’m not entirely sure I’d recommend it. Truth be told, I didn’t really love the therapist. I was lying there waiting for a while before she came in (about 10 minutes) and then she started and left for a long time. One of the needles was really hurting me, but she wasn’t around to ask for help. My foot ended up hurting for weeks as a result.

If you’re a member of World of Hyatt, the brand’s loyalty program, you can earn and redeem points for spa experiences, fitness classes, purchases from the on-site shop, and even Exhale on Demand subscriptions at participating Exhale locations.

When I’m trying to decide where to stay in NYC, it always boils down to location. Is it going to be hard to see and do (and eat!) the things I want to do? The Hyatt House New York/Chelsea was right in the middle of the action, with so much within a 10 to 20-minute walking distance.

We really had the best time exploring the Empire State Building late at night just after we landed. Visibility was low, which didn’t give us the best view but we had a surreal, eerie feeling at the top. Plus, we clowned around inside since no one else was in the historic building at that hour.

We could have been happy without even leaving the immediate area. There was so much to see and do and we were only in New York City for a few days. Still, we wanted to take in the city, and fortunately, it was pretty easy to do.

All of the other main attractions that we wanted to see were just a short commute from our hotel. That’s why we like recommending the Hyatt House New York/Chelsea when people are trying to figure out where to stay in NYC. The central location is ideal for tourists and business travelers too!

As you can imagine, I’m not big on public transportation, but you could easily dip down into a subway station and see the city through the amazing subway lines. Normally, I rent a car but on this trip, I relied on Uber for the first time in my life. It was super easy. Yes, it was an extra cost but it saved us time so it was worth it!

One of the best things about the Big Apple is Times Square. You have to check it out if you’re in the area. It’s so iconic! You never know, you could run into some of the most famous New Yorkers (especially in the theater district). We saw Gaten Matarazzo from Stranger Things just out for a stroll with his dad!

We tried so many treats from different shops and bakeries while we were in the area. We also made a pitstop in the Line Friends store and headed straight for the BTS shop (yes, I spent way too much money!).

While I was getting my acupuncture massage, Josh took a run around Central Park which was just across the street. He said the trails and paths were really fantastic and it was easy to get lost and forget he was in the middle of a city.

He enjoyed his run so much, in fact, that he ventured out much farther than he realized. To make it back to me by the time my appointment ended, he rented a bike from within the park. How cool is that?

While he was out on another run, Josh headed across the Brooklyn Bridge. I’m kind of bummed that I didn’t get to join him on this particular adventure, but he had a great time. He said it was a really fun experience, especially after seeing others run across during the NY Marathon!

We hit so many places in Koreatown (which was very different from Koreatown in LA!), but we didn’t have enough time to try all of the food we wanted! There were many shops, like Superdry, that were on our wishlist to bring gifts back for Hayley. It was right next to the Empire State Building, which made it super convenient.

So……….we went right up to 30 Rock and didn’t go in. We ran out of time and chose sleep over adventure. It wasn’t hard to get to it from our hotel, though, so if you’re staying at the Hyatt House New York/Chelsea, put it on your itinerary!

The main reason for our trip included a meeting in the Financial District, and it was an easy Uber drive from the hotel. If you’re traveling for business, it’s a good option!  While we were there, we checked out different shops and restaurants, accidentally discovering one of my favorite Japanese restaurants, Go Go Curry! You know we had to stop, right? It’s a great place for an affordable but satisfying meal.

We spent a lot of time paying our respects and reflecting at the World Trade Center. It was a misty/foggy day, and the whole area felt surreal. I’ve got goosebumps just thinking about it. It was a short walk to the subway, so it’s easy to find if you’re taking public transportation.

We didn’t get to hang out around the “Museum Mile” on the Upper East Side, but this is a great choice for people who love art galleries and/or history. Here are some of the museums you’ll find:

Overall, we had a wonderful stay at the Hyatt House New York/Chelsea. We felt that it was in the best area for our needs since the things we were most interested in visiting were within a short walk.

In recent years, we’ve started looking for hotels that include kitchens because we think it’s a great value. You can eat out, but you can also stay in and cook or even reheat leftovers without relying on a microwave (and many hotels don’t even have those anymore!

When we travel, we’re not always looking for the best hotels or the cheap hotels — we’re looking for the right hotels for us! The Hyatt House New York/Chelsea was the perfect place to set up a home base and explore the city. It wasn’t too cramped or cluttered, so it was easy to sanitize and some of the best restaurants we’ve found were right in the area.

We hope this review helped you decide where to stay in NYC, even if it’s not at the Hyatt House New York/Chelsea. Narrow down your needs, budget, and itinerary and you’ll find the right spot. Safe travels!