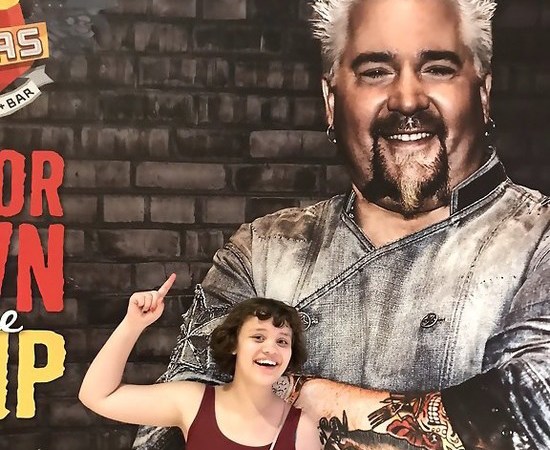 There is so much to see and do in Las Vegas. Whether you’re looking for a couples’ getaway or the perfect girls’ trip, you just can’t go wrong. There’s a lot to eat, too! This won’t be the last food-related guide we’ll create for the city, and we’ll be updating every time we make our way to Sin City. For today, if you’re looking for a few suggestions for where to eat in Las Vegas, here are some quick ideas — even if you’re on the keto diet or vegetarian!

It’s hard to go wrong with Pin Up Pizza! The slices are huge, the prices are good, and the pizza is yummy. Located at the Planet Hollywood Resort & Casino (my favorite hotel on the Strip!), it’s a quick-service counter with a small eating area inside and outside of the eatery. When we go back, we’ll have to get a better picture, because poor Hayley looks crazy in this one! Haha! 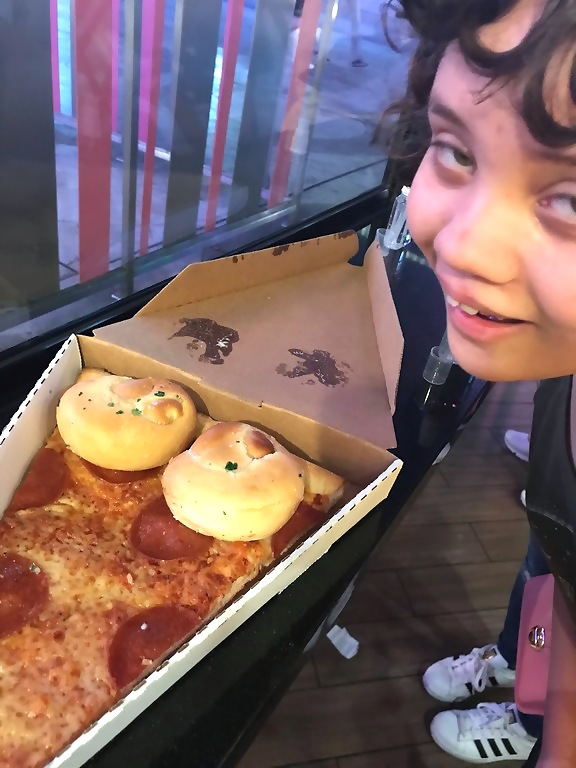 Like us, you’ve probably seen the Insider video promoting the place. It looked so delicious that we decided to try it out. Lauren had a veggie-friendly slice on her own, while Hayley and I shared one topped with pepperoni. We give ourselves a break from keto while traveling, but the carbs from this huge slice was too much for either of us!

The pizza was really good, but it would have been better had we gone earlier in the day. With it being later, it was a little dry and not as fresh. We will say that those garlic knots totally stole the show. Definitely try one!

The Planet Dailies was always my favorite round-the-clock restaurant at the Planet Hollywood. Unfortunately, after damage to the restaurant, it was renovated and became Café Hollywood. Located in the Casino area, it’s still a great 24-hour dining spot offering much of the same foods. 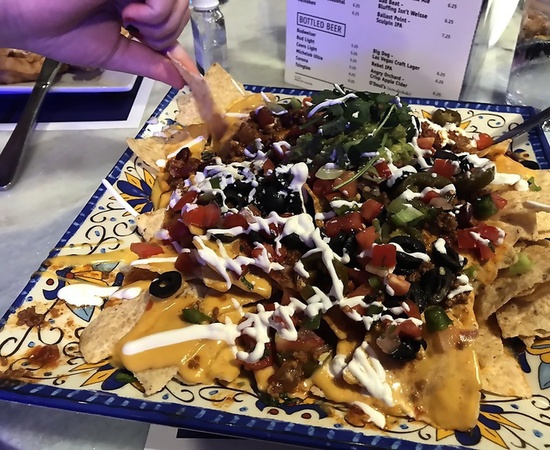 There are cheaper places to eat on the Strip, but the menu is extensive and the food is good. When you’re traveling with people who have different dietary needs, this type of place can be so convenient. Everyone has options on the menu, and we can all leave with full bellies.

We ordered two plates of nachos – chili for the meat eaters and without chili for the vegetarian.  We’ve also had burgers, chicken and waffles from Café Hollywood and everything was good.

Guys, there’s a two-story Taco Bell near the Planet Hollywood! Don’t just walk by it like we did all week. Go in there and be amazed. Seriously, it must be seen to be believed! We really regret not just eating here for most of our meals on our last trip to Las Vegas, but hey — you live and learn, right?

We’ve all got Taco Bell locations in our neighborhoods, so what makes this one so special? First of all, it’s like a club when you walk in there. Second, you can get alcoholic and non-alcoholic slushies in giant, reusable drink containers. Third, the prices are great so you can spend your money on other Vegas stuff. 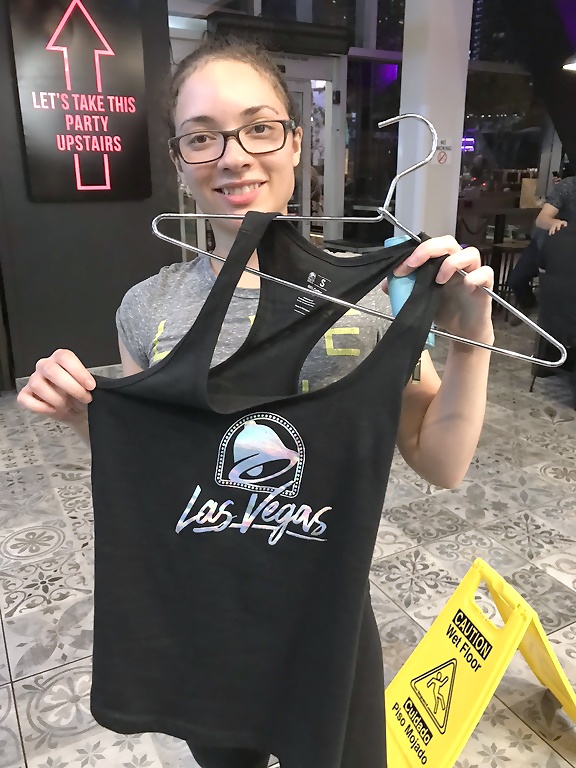 The music is bumpin’ and it’s like a party atmosphere in there. Plus, you can watch your food being made which does wonders for our travel anxiety and obsessive compulsive disorder (OCD). The staff is having a great time, which makes the whole experience even better. It’s the same Taco Bell menu you know and love at prices almost anyone can afford. Worth. It. You can even get married there!

You’ll have to head down to the Venetian, but the food at Canonita is worth it. This is the PERFECT option for people who are eating keto OR vegetarian. Just order the fajitas! Plus, when the menu is filled with Mexican classics and margaritas, you can’t go wrong! 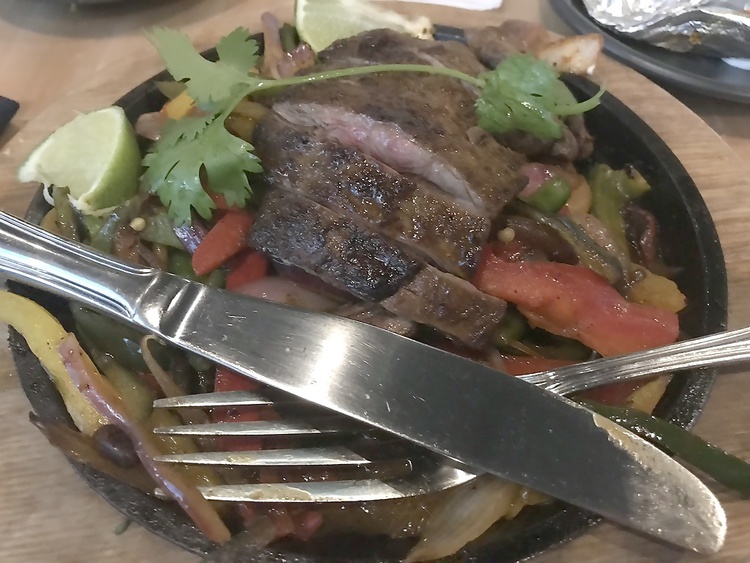 We ordered the chicken fajitas, beef fajitas and vegetarian fajitas. It was just what our bodies needed after days of indulgence in Vegas. Be forewarned, though — it’s pretty pricey! Our meal for three was close to $100, a far cry from what we paid at Taco Bell.

Still, we were pretty happy to find a place where we could all enjoy a meal together and the scene inside the Venetian is pretty spectacular. You can’t beat those ceilings and the passing Gondola rides! If you’re looking for a nice patio atmosphere away from the crowds and the heat, though, this is a good choice!

Let’s be real for a moment —Guy Fieri may not be the best “chef” in the world, but he’s a cultural icon. We are not ashamed to admit that we love him. There are a couple places in Vegas where you can get your Fieri on, but Guy Fieri’s Vegas Kitchen & Bar is located in the heart of the action at the LINQ hotel. 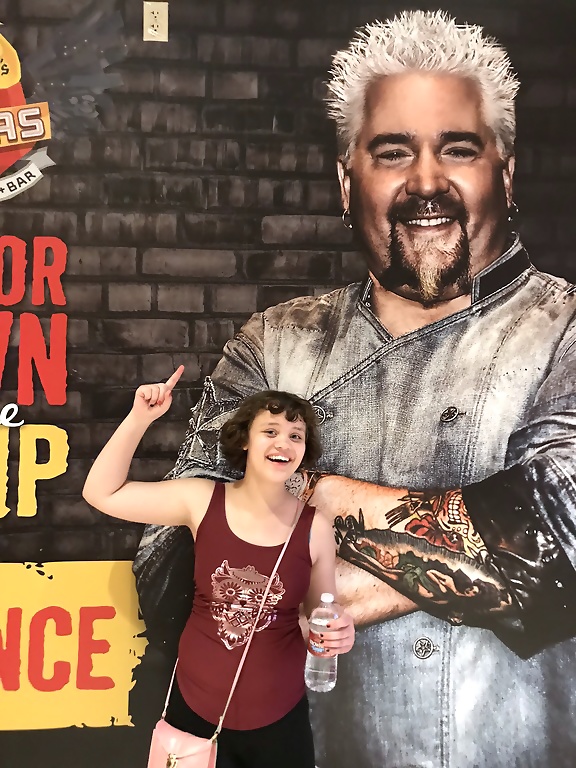 There’s always something going on right in this little hub, so if you’re wondering where to eat in Las Vegas, check this out. Again, Guy Fieri isn’t going to win the James Beard award for culinary greatness any time soon, but the food is good. It’s Vegas, do you really need a five-star menu?

The best part about this place is the location. If you pick a seat at the large outdoor patio, you’ll have a great view of the High Roller Ferris Wheel. People watching for the win!

Fan of the show? You’ll have to stop by Gordon Ramsay’s iconic restaurant which offers dishes inspired by the popular Hell’s Kitchen series. Due to high demand for a table, you should definitely make reservations. Fortunately, if you’ve got a long wait, you can take pictures in and around the restaurant located in front of Caesar’s Palace. 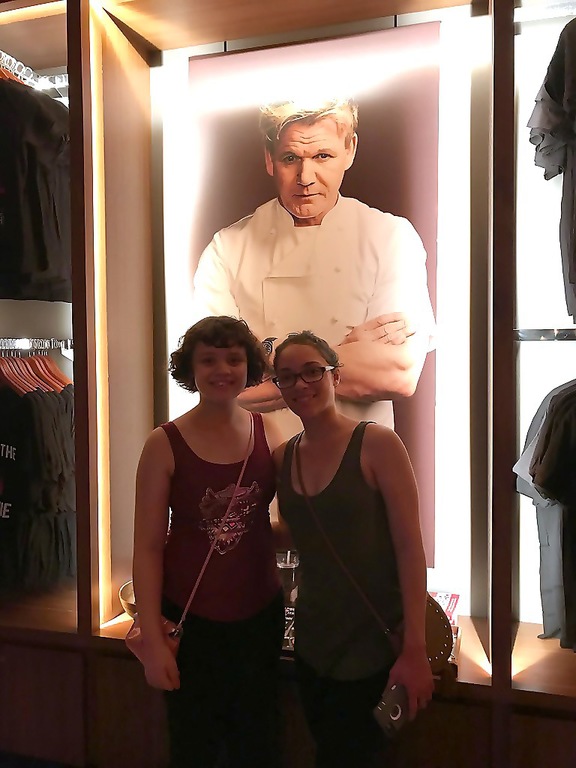 Bring an appetite for Beef Wellington, Eggs in Purgatory, Hell’s Kitchen Burger, and Sticky Toffee Pudding — you won’t leave disappointed (but you might leave broke!).

To be fully honest, while we took some cute pictures in and around the restaurant, we didn’t get to eat here. Josh has however, eaten at three of Gordon Ramsay’s restaurants — Pub & Grill, Steak, and Burger. Hell’s Kitchen is still on our bucket list and is probably the complete opposite of a Guy Fieri restaurant, but it feels like one of those once-in-a-lifetime splurges that we’re ready to make!

Looking for great food and generous portions at a fantastic price? You can’t go wrong with Ocean One Bar & Grille in the Miracle Mile Shops at Planet Hollywood! One night, we grabbed ½ pound burgers and fries for $6.99. I’m not exaggerating when I say that they were mind-blowingly good. I don’t know if we were just super hungry, but those were some seriously tasty burgers. Our meal was so good, in fact, that I completely forgot to take a picture! 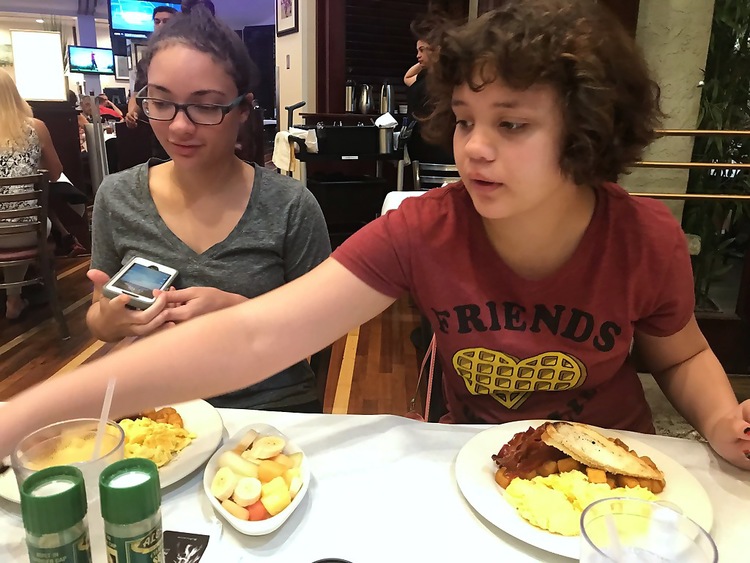 After a night of debauchery, we made our way back to Ocean One Bar & Grille for breakfast! We’re going to believe that the burgers were as fantastic as we thought, because the breakfast was bangin’ too! We paid $5.99 each for our meals, and it was more than enough!

We shared the toast because Hayley and I were trying to minimize our carb intake, so Lauren grabbed a couple slices from us. She also ordered a side of fruit to go with her veggie-friendly meal, while Hayley and I thoroughly enjoyed our bacon. Everything was good, but we’ve got to say that the breakfast potatoes were seriously among the best we’ve ever had in our entire lives — and we live in Idaho right now!

You might be in for a little bit of a wait, but if you’re a fan of P.F. Chang’s it will be worth it. Again, there’s a lot to eat in Las Vegas, but sometimes you just want something familiar. After being out on the Las Vegas Strip, the atmosphere inside P.F. Chang’s might feel jarringly upscale, but you’ll probably welcome the reprieve. 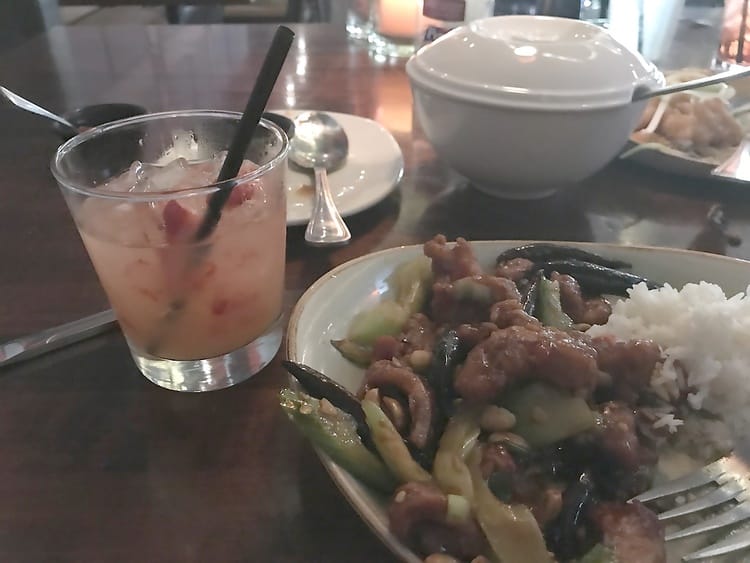 As is the case with most the franchise’s locations, the tables are very close together. In fact, they seem even more cramped in Vegas, which is a bit annoying. Battle through the weirdness and just enjoy some lettuce wraps, okay?

P.F. Chang’s has items that work well for the keto diet, vegetarians and even gluten free. My favorite has always been the Kung Pao chicken and we adore the egg rolls. It’s a nice, calming retreat away from the hustle and bustle of the Las Vegas Blvd. Give your feet a break and then get back to the action! You’ll feel fully recharged!

When we lived in Virginia, we heard about Raising Cane’s and had to try it. The first location I ever visited was in Charlottesville, and I was blown away by how delicious everything was. Even though the one in downtown Richmond is tiny, and basically on the VCU campus, we made treks down there all the time. In fact, it was one of the last things we ate before we moved to Idaho! 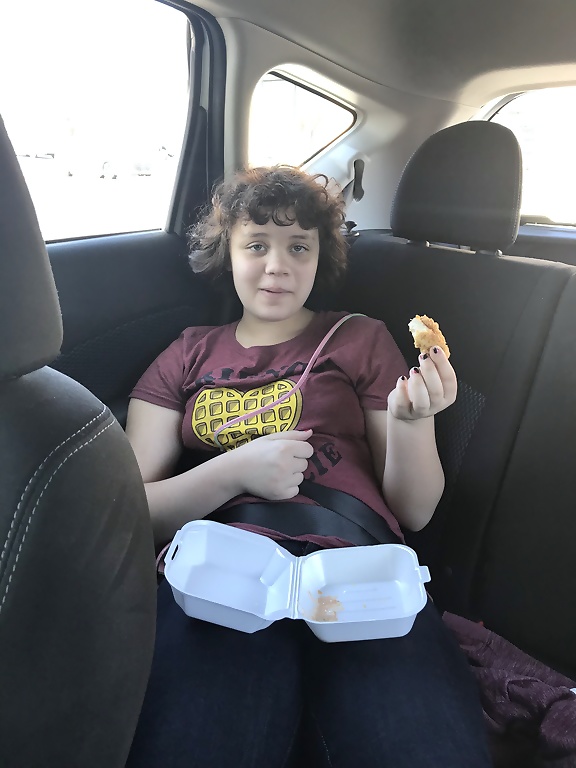 Without any nearby in Boise, we saw the Raising Cane’s location in Vegas and had to stop. Yes, we had Lauren in the car and she braved the meat smells so that Hayley and I could make the end of our last trip to Sin City even sweeter. Our bellies were full from breakfast, but we found room for a chicken and fries kid’s meal — with an extra sauce, of course!

Hayley couldn’t even sit fully upright and my hands were greasy on the steering wheel, but we thoroughly enjoyed those tender morsels. We can’t wait until we get to have that again. It’s been less than a year, but it feels like we need to book another trip to Vegas soon!

Looking for some keto-friendly options for food in Las Vegas? Don’t forget that, as the keto diet has grown, many establishments are willing to modify orders to fit customers’ needs. You definitely won’t go hungry, or be forced to compromise (unless you want to, like us!), when you’re in Vegas.

One option for keeping your carb intake in check is that you can do meal prep in your hotel room like Keto Virgin, which is absolutely badass. What a brilliant idea! If you’d prefer to skip cooking on your vacation, you can check out some of these places on your next trip:

On one trip, we did venture into the Buffalo Wild Wings, and I’ll admit that I’m not particularly fond of this chain. While the waitstaff were extremely friendly, it took a ridiculously long time for us to get our wings. Maybe 40 minutes or, which is shockingly slow, especially for Las Vegas. We just had two small orders too, which made it even more frustrating. So keep that in mind if you make your way to this location. It might have just been an isolated problem, but it’s probably better not to take the risk if you’re running late for a show.

On the other end of the spectrum, some may want to avoid meat or meat products entirely. If you’re willing to stick with salads, pretty much every restaurant will have plenty to choose from. Just be sure to explain your dietary needs when you place your order to avoid confusion. There are some places on or near the Las Vegas Strip where you can find menus designed for those who feast on vegetarian foods. They include:

What do you love to eat in Las Vegas? Do you have any secrets for the best restaurants on the Strip? Do you think it’s better to go off the beaten path to find the best foods in Vegas? What have your keto and/or vegetarian adventures been like in Sin City? We want to hear all about it. Leave us a comment!