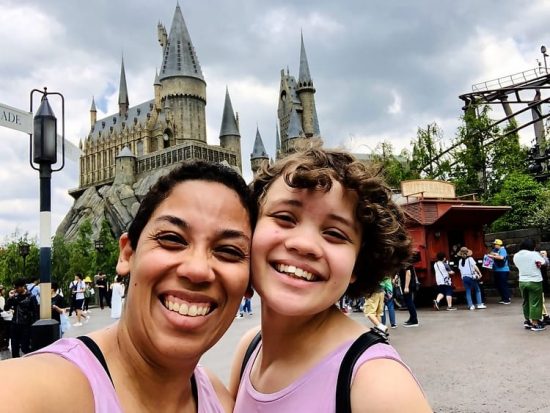 Universal Studios Japan is located just outside Osaka, Japan. It opened in 2001 and sees an average of 14.9 million visitors per year. It’s home to several theme parks including the Wizarding World of Harry Potter and the upcoming Super Nintendo World.

We did a lot of research and we still didn’t know enough! To save you some time and stress, we’ve put together some tips for Universal Studios Japan. We know you’ll have an amazing, memorable time!

Where is Universal Studios Japan?

Universal Studios Japan is located in the Osaka area of Japan. The easiest way to get there is to take the train to the Universal City station, which is just a few stops from Osaka City Station. While it’s not every train, some of them are themed for the Wizarding World of Harry Potter. We saw these all the time at the Universal City station during our trip! Be sure to check out our full guide on using the Shinkansen rail system, JR Pass and how to ride the Harry Potter and Hello Kitty trains! 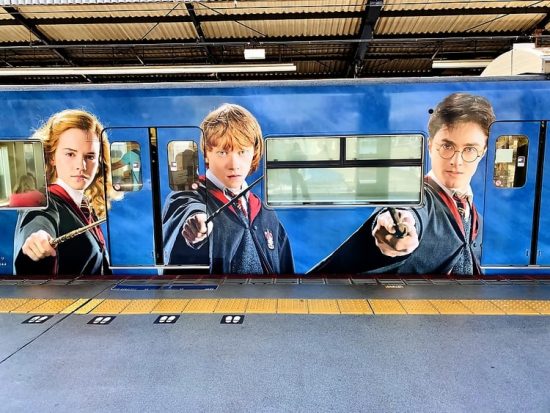 There isn’t a lot around the park, which makes it great for taking a break from the hustle and bustle of the city. We were able to decompress and get a reprieve from our travel anxiety!  Of course, you’ll have all of the amenities of Universal CityWalk Japan and the other Universal hotels, but outside of that, it’s really quiet. You’ll see a lot of boats docking at the port, though!

If you find yourself needing pain relievers or other over-the-counter medications, there is a full pharmacy at the Universal CityWalk. It’s a very short walk and having that nearby was great for calming our travel anxiety and obsessive compulsive disorder (OCD).

There are several ways that you can buy tickets to Universal Studios Japan. There is always the official site, but I found it to be pretty confusing, even with the translated pages. Still, it has the most accurate information, so this is definitely an option. You may also purchase tickets at the gate, but planning ahead saves time and staved off our pre-travel anxiety.

You can also buy through third-party vendors. Be very careful with this because some of these have poor reviews from customers. We booked park tickets and Express Passes through Klook.com for Universal Studios Japan as well as other nearby attractions. It had a great app and the experience was easy. We highly recommend Klook!

Word of caution: You have to buy your park passes for a specific day. There are no exchanges. If you get there and it’s raining or your flight has been delayed, you’ll be out of luck. Choose wisely!

The Express Pass system works very differently at Universal Studios Japan. Rather than being a single pass that covers most attractions, you’ll have to be very specific about which rides you care about. On top of that, you can only use the Express Pass one time per ride.

We bought the Express Pass 4 – The Flying Dinosaur which included the following:

There were long lines for most attractions and we can absolutely say that having the Express Passes saved us a ton of time and allowed us to get on as many rides as possible. It also helped with our travel anxiety because we spent less time worrying while we waited!

One of my 12 tips for Universal Studios Japan is to expect Wizarding World of Harry Potter to be very busy. That being said, we got very lucky during our trip. We went on a Friday in May and the crowds were more than manageable. That being said, we had “timed entry” because we had purchased our Express Passes in advance, so that helped. 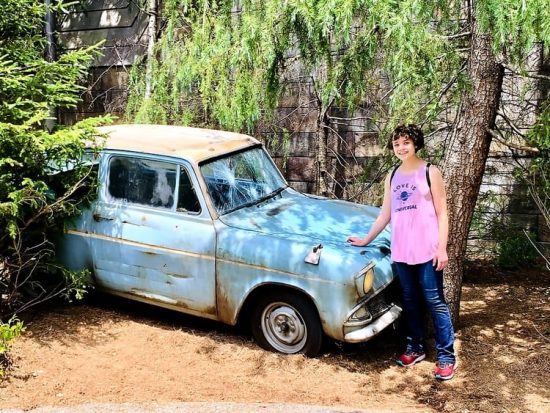 Enjoying the attractions at Wizarding World of Harry Potter in Japan requires you to enter at a specific time during the busy season. You can do what we did, or you can wait until the day of your visit. You’ll have to run into the park and fight the crowds at the ticketing site in Central Park. All members of your group will need to be with you.

Word of caution: You cannot pick your time! It could be 9am, it could be 7pm. It’s random, and if you miss the window, you won’t be able to get in. Also, once you leave Wizarding World of Harry Potter during these busy times (or Universal Studios Japan, for that matter), you can’t go back in.

Just like any theme park around the world, there will be days that are more ideal than others. You’ll want to time your visit to get the most out of it, otherwise, you could really spend all day at Universal Studios Japan and barely ride anything. Here are some times to avoid:

If you can get there in the morning, especially on a Tuesday, Wednesday, or Thursday, you’ll likely see shorter lines and smaller crowds. Fewer crowds mean less stress, which will help keep any travel anxiety in check!

As mentioned, we had timed entry for The Flying Dinosaur with our Express Pass, which was a really good thing. The wait time was over two hours, and the ride looks pretty intimidating. We might have “chickened out” if we didn’t have a specific time to ride!

The Flying Dinosaur is a suspended roller coaster, similar to the Superman style you’ll see at other parks. The harness is a nice, heavy rubber, and feels very secure. While we were terribly nervous getting on, it was actually a smooth, unique and incredibly fun experience!

You’ll soar over and around the Jurassic Park area of Universal Studios Japan, which is covered in vegetation and scenic waterfalls. We absolutely loved it!

No matter what you think of the American version of the Jaws attraction, you need to do it at Universal Studios Japan. There is no photography and no video permitted on the ride, but we can promise you that you will have a blast. 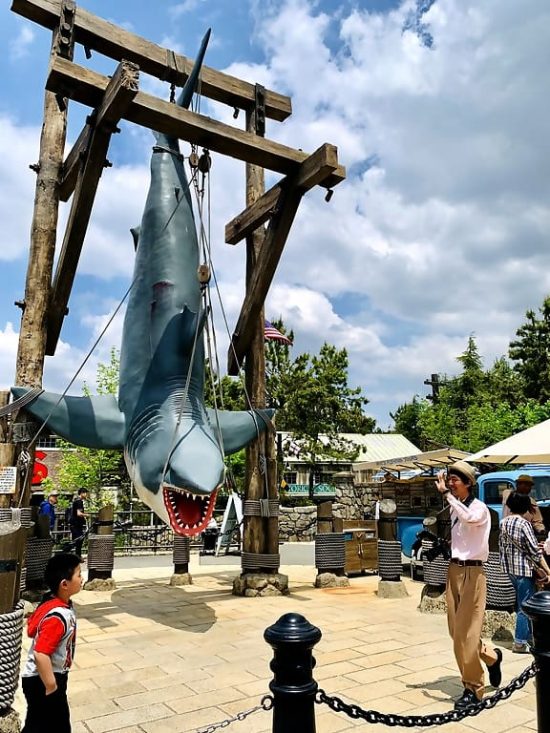 Unlike the stateside parks, Universal Studios Japan really takes pride in this ride. It looks brand new! Maybe we got lucky, but the woman leading our experience was very animated and made it so much fun (even though we couldn’t understand what she was saying)! We would do it again in a heartbeat!

The other roller coaster at Universal Studios Japan is Hollywood Dream. You can choose to ride it forwards or backwards (the “Backdrop” option). The ride is… bouncy? It’s hard to explain, but like The Flying Dinosaur, it’s very smooth even though you’ll also get a lot of air time.

So here’s my warning about Hollywood Dream — you might be too big to ride it. At the time of our visit, I was 186lbs and I’m 5’ 3”. I wear a women’s L or size 12 pants. I barely made it on this ride. In fact, I was pulled out of the line at the entrance and very politely asked to see if I’d fit in the ride restraints. It was a close one, but I made it on!

The problem area for me with the harness? My thighs! I was completely shocked by this! So, if you are carrying a little extra weight, keep this in mind before you queue up!

Take Your Costumes and Dress Up!

Guests at American parks have been regularly disappointed by the fact that they can’t dress up, even for events such as Halloween Horror Nights or the new Star Wars Galaxy’s Edge attraction. Those rules don’t apply at Universal Studios Japan, and it really added to the excitement.

So, if you’ve got some Sailor Moon cosplay items sitting around, this is the time to wear them! Put your nerdiness on full display and wear your Hello Kitty ears proudly!

What to Eat at Universal Studios Japan

There are many, many food offerings available at Universal Studios Japan ranging from sweet treats to full meals. While it’s uncommon to see people walking around the streets of Japan eating or drinking (it’s considered rude), you will see people noshing at the park. 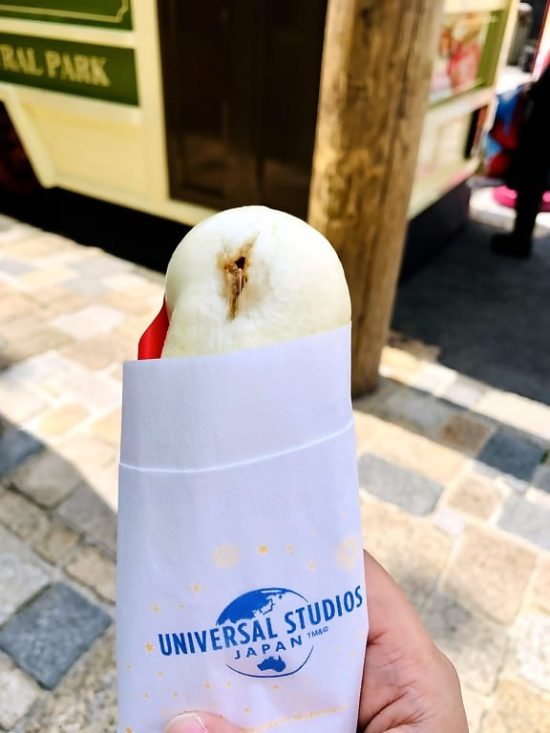 We tried a number of things, but this Chinese-style pork bun from a food truck in the New York area was delicious. One of our 12 tips for Universal Studios Japan, therefore, is to taste your way through the park! We love how the Japanese serve handheld foods. It’s very sanitary and keeps our travel OCD from getting out of hand!

While it’s not the largest of the Universal CityWalk areas we’ve visited, the one located at Universal Studios Japan is well-designed and offers more of what we like. There are two Lawson convenience stores, for example, where we loved getting corndogs, drinks, and allergy medication at reasonable prices. As previously mentioned, there is also a drug store.

Of course, it also had a number of shops and restaurants including McDonald’s, TGI Friday’s, Wolfgang Puck’s Pizza Bar, Starbucks, and many local eateries. Just keep in mind that these don’t stay open late, and one night we were stuck desperately searching for food because it was after 10pm.

There are several official Universal Studios Japan hotels located nearby, with the Park Front Hotel technically being the closest. You can buy park passes in the lobby, which is convenient. The majority of them are right in the middle of CityWalk, but we stayed at the Universal Port Hotel which was just across the street. 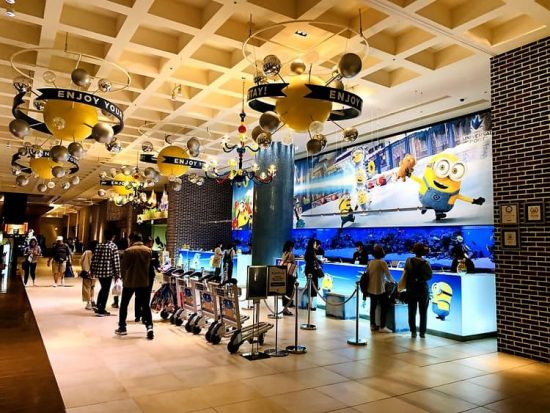 Honestly, we don’t think it’s worth paying more to stay at one of the “closer” hotels because the distance is negligible. We were able to get to the park in fewer than five minutes, and our hotel was Minions themed. We wouldn’t stay anywhere else!

Worth the Long Haul Flight

You’ll have to endure a long haul flight to get to Japan from North America, but we think it’s worth it. We battled through our travel anxiety to get there, and we’d do it again! We loved that Universal Studios Japan gave us the familiarity of a Universal park, while bringing in the local culture and experiences. It really was a fantastic experience, so I hope these tips for Universal Studios Japan help make your visit a success! 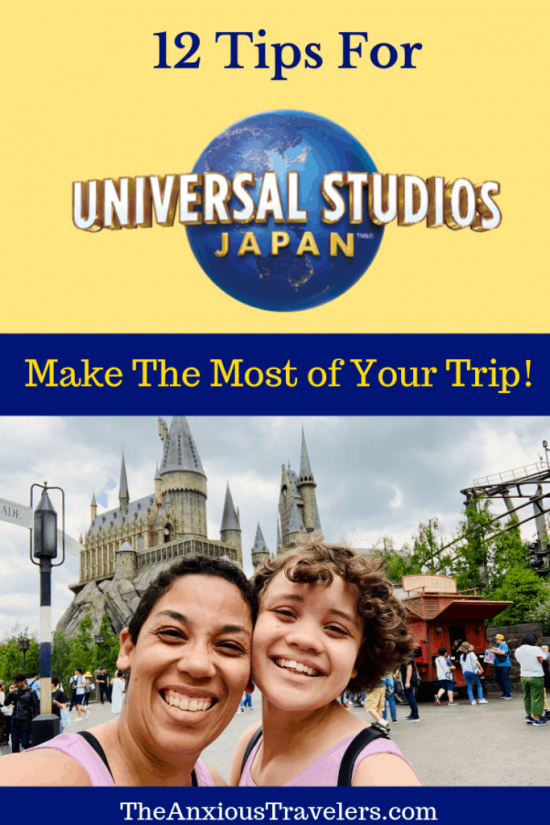