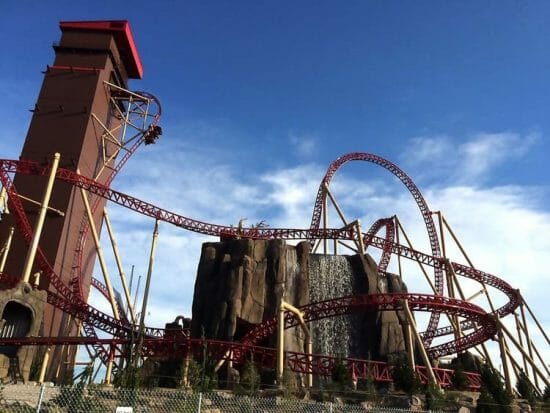 We’re huge fans of theme parks — we’ve visited many in several countries around the world! When we moved to Idaho from Virginia, we were sad to leave Busch Gardens behind. For years, I’d heard about Lagoon Amusement Park in Utah, so we decided to make the drive down to check it out. We were pretty happy with what we found which is why it was pretty easy to come up with our Top 5 Rides at Lagoon Amusement Park!

Lagoon Amusement Park in Farmington, Utah has great rides, roller coasters, and attractions for families and thrill-seekers. It’s also home to Cannibal, which holds the record for the tallest, steepest roller coaster in the world. Lagoon is a short drive from Salt Lake City and has hotels, restaurants, and shopping nearby.

Before we get into the best rides Lagoon has to offer (and another big one is in the works!), let’s take a moment to talk about the park. We’d love to share our review and overall impressions of this family-friendly destination!

Lagoon Amusement Park is located in Farmington, Utah, just outside of Salt Lake City. Established in 1886 under the name Lake Park, Lagoon is one of the oldest amusement parks in the country. If you plan to travel to the area, be sure to check it out!

Lagoon Amusement Park is for families! Even younger children can get on most of the rides, which makes a day at the park so much more enjoyable. Along with the ability to bring your own food and great seating options/picnic tables, it makes Lagoon perfect for guests of all ages. Here are a couple of helpful links:

There isn’t much theming at Lagoon Amusement Park but you really won’t miss it. They’ve maintained that classic old amusement park feel while seamlessly integrating modern rides and conveniences. It’s pretty basic in a lot of ways, but the layout is smart and efficient. Ultimately, it’s one of the things I like most about Lagoon. Sometimes, simplicity is best!

The big standout at Lagoon is Cannibal. It holds the record for being the tallest, steepest roller coaster in the world. After climbing 208 feet, riders are plunged into a 116 degree beyond vertical drop and straight into an underground tunnel. Reaching a top speed of 70mph, Cannibal even includes a 140-foot tall inverted loop and a cool waterfall.

I’ll admit that I had to work up to getting on this thing, but Cannibal is one of my favorite rides ever. That initial drop is so shocking to your mind and body, that you don’t even have time to be scared. Definitely worth the long line!

One note: make sure you put everything in a locker before you go on this because Cannibal will eat your cell phone. If you wear glasses, keep them on your face. Don’t try to hold them. I lost my prescription glasses on this ride and, fortunately, they halted operations to find them. Don’t make the same mistake — heed the warnings!

Okay, so this is an area where Lagoon is lacking. There are a few flat rides and the eternally terrifying flying swing (called Turn of the Century at Lagoon), but there’s are really only two attractions that I’d really deem thrill rides.

There are a great variety of roller coasters that are perfect for families and adults who prefer something a little tamer. It’s rare to find good family rides, these days, but Lagoon Amusement Park really delivers.

During one trip, my daughter and I rode Spider nine times in a row. We just could not get enough! Here are some other family-friendly coasters:

While Cannibal is the biggest, it’s not the only extreme coaster at Lagoon Amusement Park. Again, this isn’t Cedar Point so you won’t find Top Thrill Dragster, but there are a number of rides that will get your heart pumping. That’s all that matters, right? For a slightly bigger thrill, these are some good options:

Things get dark at Lagoon around Halloween for their annual Frightmares event. With more than nine haunted attractions, guests can enjoy themed entertainment, rides, games, food, and more. Frightmares is intended for families so, if you’re looking for big scares, you might want to skip this!

The price of admission includes access to the Lagoon-A-Beach water park during the summer months. Guests can beat the heat on slides, rapids, and even a lazy river. Tube rentals are available at a very reasonable cost (discounted for season pass holders!).

Pioneer Village takes guests more than 100 years in the past to the days when the first settlers arrived in Utah. A recreation of a typical frontier community, the attraction includes an ice cream parlor, a one-room schoolhouse, and more!

Okay, now that we’ve set the tone, let’s talk about the Top 5 rides at Lagoon Amusement Park. These will always hold a very special place in my heart because getting on them helped me overcome my fear of thrill rides and roller coasters. This was the place where I planted my feet and do the things that scared me most. With attractions offering a wide range of intensity, it was the perfect place to work through my worries and emerge stronger than ever.

Want to have some serious bragging rights? If you don’t get eaten by Cannibal, you’ll be able to say you survived the roller coaster with the tallest, steepest drop in the world! After an elevator in the tower lifts your car to the top, you’ll pause for a moment to truly appreciate how high this ride really is. The highway always looks so tiny from up in the sky before the world turns upside down!

Then, you’ll plunge into a 208-foot, 116-degree drop, through a tunnel, and straight into a 140-foot tall Immelmann loop. There are water elements, dive loops and so many cool features, but it’s the “Lagoon Roll” that will make you question your sanity! This is definitely one of the Top 5 Rides at Lagoon Amusement Park!

From the ground, Wicked looks a little crazy in comparison to the other rides at Lagoon. While it’s definitely, the second-most thrilling ride at the park, the intensity really falls off after the drop. When my daughter decided to tackle her fears and get on Wicked, I told her that, if she could get past the first 10 seconds, she’d be golden. Spoiler – she did great!

This launch coaster boots riders straight up a 110-foot tower and, after they crest over the top, they drop right back down the other side of the top hat. After that, there’s a half-pipe, a heart-roll inversion, and some other fun elements, but it’s definitely on the tamer side.

This wooden coaster is so much fun. Even the name, basic as it is, adds to the experience — we giggle every time it says, “Thank you for riding roller coaster!” It’s a classic, cheesy good time and, if you haven’t been on a roller coaster in a while, this is a good place to start. It’s also a favorite with the locals.

Originally built in 1921, Roller Coaster has been updated over the years, but still has that old-fashioned feel you’d expect from a nearly 100-year-old ride. The stop at the end of the ride (like most at Lagoon) is a little rough, though, so brace yourself! Still, the history of this ride makes it so amazing. We had to include it in our Top 5 Rides at Lagoon Amusement Park!

If you’re looking for a good intro to inversions, head to this Schwarzkopf-engineered ride. Built in 1983, Colossus: The Fire Dragon has a respectable 81-foot drop, back-to-back loops, and a tight, intense structure. One of my favorite things is seeing flags from different countries (including my home – Canada!) on the lift hill.

You will feel every bit of the 4.8 G-force, so keep that in mind if you want to ride this more than once. I’ve definitely yellowed out a bit after riding this several times in a row, so I’m not sure I’d recommend that.

It might not look like much but The Spider is actually a really fun ride. It’s a spinning steel coaster that is smooth, surprising and different every time you get on (since each seat seems to spin at its own speed). The first day we rode Spider, we got back in line eight more times. It just never got old!

We’ve had times when the experience was relatively tame with minimal spinning and other times when it felt like we were almost out of control (in the best way possible)! This is a great coaster for people looking to kick up the intensity without going too hard. Just be forewarned — you might need to read up on our tips to prevent motion sickness before you get on this one!

Honorable mention: The Bat is a solid option for a family-friend hanging coaster. Surrounded by trees, you’ll feel like your feet will get tangled in the leaves. It’s so much fun, especially for younger thrill-seekers.

While I didn’t list them all here, Lagoon Amusement Park offers a wide variety of rides and attractions for guests of all ages. If you’re looking for a day of thrills with your family, this is a great place to go.

The prices are reasonable, you’ll save money by bringing your own drinks, and you can even leave and go to a nearby restaurant and come back (be sure to get your hand stamped before leaving Lagoon!).

Even though it’s a four-hour drive to get there, I’m a season pass holder because it’s a fantastic park for me and my kids. There’s something for everyone (and it’s clean)!