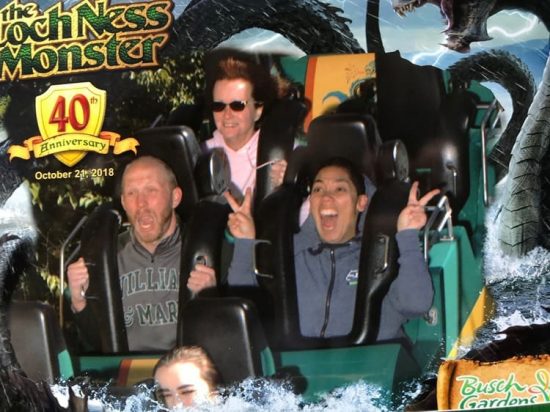 Located an hour from Richmond, you’ll find the charming and historic city of Williamsburg, Virginia. If you’re in the area, be sure to check out Colonial Williamsburg, tour the campus of the College of William & Mary (Josh’s alma mater!), and grab a delicious bite to eat. Just make sure you don’t pig out before tackling our Top 5 Rides at Busch Gardens Williamsburg!

Busch Gardens Williamsburg is an amusement park located in Williamsburg, Virginia. The park is home to several high intensity roller coasters including Griffon, Apollo’s Chariot, and Invadr. For the 2020 season, they will be adding Pantheon, the fastest multi-launch roller coaster in the world.

Feeling adventurous? Be sure to drive the short distance from Colonial Williamsburg to Busch Gardens. The gorgeous park has been named “Most Beautiful Theme Park” every single year since 1990. If you’ve been there you’ll know it deserves that title! It’s more than just a pretty face, though! There are a number of incredible rides for guests to enjoy. Of course, which is best will depend on what you’re looking for. Here are OUR favorite rides at Busch Gardens Williamsburg!

From the ground, Griffon is absolutely intimidating. You can see riders dangling over the top of that first 90-degree drop (which makes this a “dive coaster”) before they plunge into a tunnel and right into an inversion. Don’t let that stop you! It took me a few years to build up the courage to get on, and unfortunately, it was freezing that day. The picture below is hilarious because it felt like icicles were filling our lungs from the chill!

Griffon is intense but aside from the two very similar drops, the rest of this ride is pretty straightforward. Dive coasters have a bit of a reputation for being one-trick ponies, and I can definitely see that. Aside from the super scary looking drops, they feel very much like most roller coasters. That doesn’t mean it’s not a thrilling ride, though!

Griffon was designed by Bolliger & Mabillard (B&M) and initially broke records before being overtaken first by Valravn at Cedar Point and then Yukon Striker at Canada’s Wonderland, which now holds the record for tallest, fastest and longest dive coaster in the world. While that’s my favorite one over all, Griffon is a close second.

When you pull up to Busch Gardens Williamsburg, the first thing you’ll see is Apollo’s Chariot. That first hill peaks over the top of the trees and just look immense and powerful. It has the distinction of being the first hypercoaster (a roller coaster with a drop greater than 200 feet) built by Bolliger & Mabillard, and has been thrilling guests since 1999. Most people would definitely rank this among the Top 5 Rides at Busch Gardens Williamsburg! 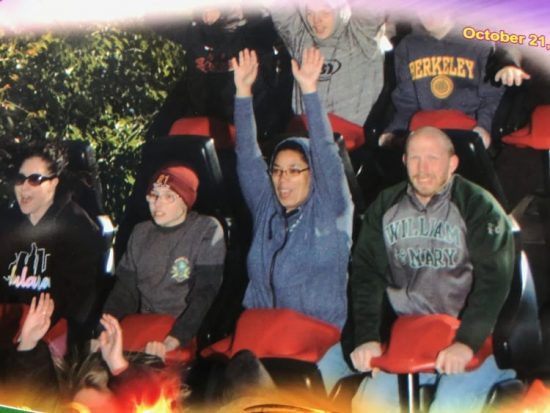 The climb on this steel coaster is a little terrifying because it feels like it lasts forever. The lift hill lasts an eternity, which added to my crazy nerves the first time I rode it. Ultimately, though, I’ll say that it just adds to the excitement! With the fantastic speed and air time, you’ll definitely feel like you’ve been riding with the Greek God himself!

Look at me, formerly scared of everything, with my hands up while everyone else was holding on. We were season pass holders for years. It’s so funny that the only pictures we have are from the one cold day we visited after moving to Idaho.

The theming on this multi-launching steel coaster is out of this world. You’ll feel like you’ve traveled through Germany’s Black Forest — and it’s terrifying. Even the queue area is decked out and riders are dispatched with a final greeting, “Auf wiedersehen!,” as they leave the loading area. Waiting for our turn, my heart rate quickened a little after hearing that! 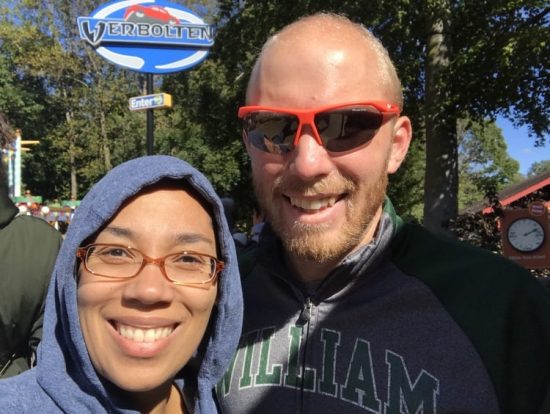 Designed in a collaborative effort by Zierer and Busch Gardens Williamsburg, the ride officially opened in 2012. While that first launch takes you straight into darkness, it’s the second launch that’s truly unique — it follows a freefall drop right in the middle of the ride. Even if you’re expecting it, you’ll always be surprised!

If you don’t like the dark, you might want to skip this one. There is a LOT of pitch blackness. I’ll admit that it freaks me out entirely. If you can summon the courage, it’s totally worth it! Even if you only ride once, Verbolten is too unique to miss!

As you might have guessed from the name, Alpengeist has an Alpine mountain theme. Fitting for a ride whose name “Ghost of the Alps” in German! The inverted, or “hanging,” coaster is supposed to feel like a ski lift that’s malfunctioned in a big way! As someone who grew up skiing, I can absolutely say that a broken ski lift was among my top fears. That’s why this is definitely one of the Top 5 Rides at Busch Gardens Williamsburg! 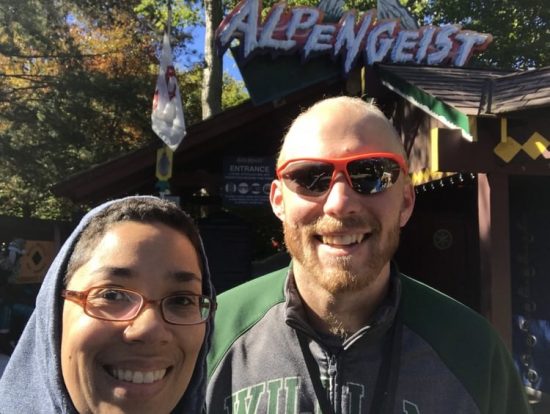 This exhilarating coaster has everything you could want — a 170-foot spiral drop, both vertical and Immelmann loops, tunnels, cobra rolls, corkscrews, and a zero-g roll. I was completely surprised by the movement on this thing, and giggled with delight when my legs flopped around like a rag doll. It’s older, but when it’s well-maintained, it’s as good as any of the new stuff. Check it out – Alpengeist will be the best ski trip of your life!

The first wooden coaster at Busch Gardens Williamsburg opened in 2017 after a three month web campaign to name the ride. Fan voting selected InvadR over two other choices, Viking Raider and Battle Klash. After fully enjoying our experience, we think the name fits perfectly. As you can expect from Busch Gardens, the Viking theming is pretty cool and it’s a great addition to an already wonderful park. 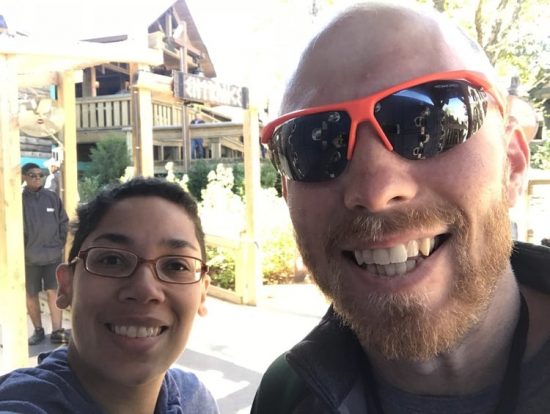 InvadR is a fun ride even if it’s not the most thrilling wooden coaster we’ve ever ridden. There were a few good little surprises, and the ride feels solid overall. That’s always a good thing, right?!

This is definitely the most family-friendly selection on our list! It may not be as fast as some others and it might be replaced when we ride Pantheon, but we think it belongs in the Top 5 Rides at Busch Gardens Williamsburg!

We have to acknowledge this because it’s a classic and was the first roller coaster in the world to feature an interlocking loop. Being a local, Josh is particularly proud of this ride. While I agree that it deserves recognition, the experience is a little rough. Some refurbishments have improved this jerkiness, but Loch Ness is definitely showing its age (happy 40th birthday, Nessie!).

Aside from the roughness and double inversions, people who are afraid of the dark might struggle on this ride. So, keep in mind that there are many different types of thrills on Loch Ness Monster. I’ll completely own up to the fact that, when we were in some dark tunnels and the monster was “growling,” I totally lost it. Full on screams of terror and all.

Will I ride Loch Ness Monster again? Probably not. Can I see how this was a hot fire ride back in the day? Absolutely! We’re just about the same age, so I’m gonna celebrate Nessie — flaws and all.

A Word About Tempesto

Tempesto is a unique roller coaster that operates in a closed circuit. Riders experiences backward and forward movements and acceleration, as well as an inversion. It’s hard to explain this thing unless you’ve seen it in person. Despite being season pass holders, we never got to try Tempesto. Every time we visited, even the one time we flew all the way from Idaho, it was down. We think it’s a combination of bad luck and interesting mechanics. 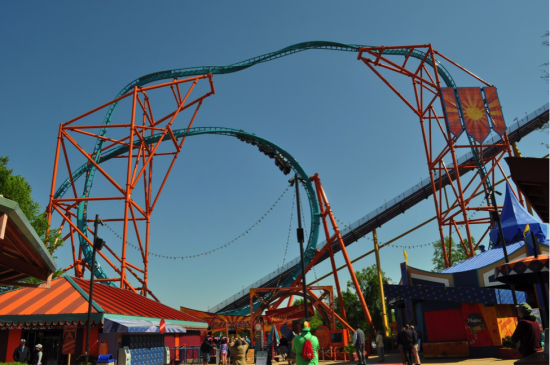 It was built by Premier Rides and the people who have ridden it tend to enjoy it. In fact, it’s popular enough that a similar ride, Tigris, was added to the Busch Gardens Tampa line up in 2019. Maybe we’ll have better luck getting on the one down in Florida!

Here are some ride specs:

That’s it. That’s our Top 5 Rides at Busch Gardens Williamsburg roundup! Of course, we’ll be updating this regularly. We’re hoping to get out there soon after Pantheon opens so we can get a good review, but we’ll just have to wait and see what happens. It’s an exciting time to be a roller coaster fan!