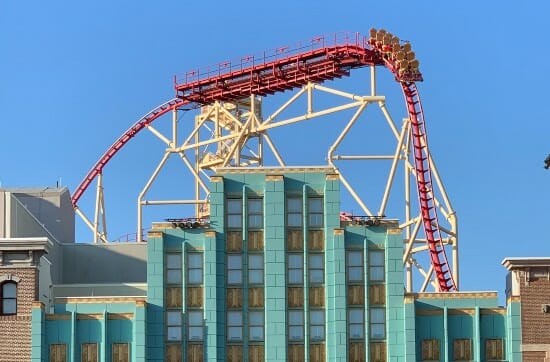 Heading to Universal Studios Florida? You’re in for a great time! The park is beautiful and offers rides for guests of all age groups. Whether you’re a thrill-seeker or prefer to keep your feet firmly on the ground, you’ll find something to keep you entertained! If you have time, be sure to head over to Universal’s Islands of Adventure and see all that it has to offer! For now, though, here are our Top 5 Rides at Universal Studios Florida.

Harry Potter and the Escape from Gringotts

Harry Potter fans will want to head straight to the London section of Universal Studios Florida where the Wizarding World of Harry Potter – Diagon Alley is located. Once you pass through the brick wall (the first entrance into the area), be sure to look for the dragon — you can’t miss it, especially when it spews fire! That’s where you’ll find Escape from Gringotts!

Related: How Scary is Harry Potter and the Escape From Gringotts? 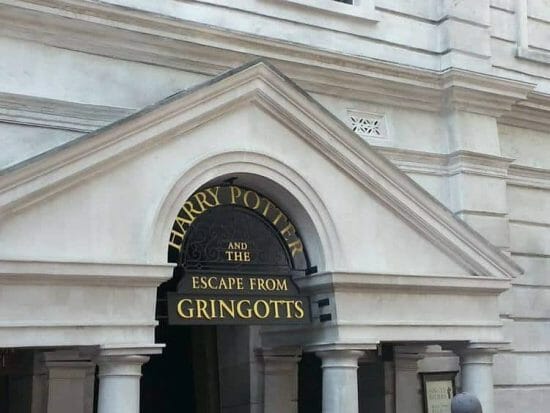 Here are some ride specs for Escape from Gringotts:

One of the best things about this indoor coaster is the waiting queue. If you’ve got to stand in line, it may as well be inside Gringotts, right!? The attention to detail is mind-blowing and you’ll feel just like Harry Potter did the first day he entered his family’s vault. If you stay at Universal Orlando Resort, one of the perks is that you can get into Diagon Alley an hour early. That’s how we got on this ride with almost NO LINE!

Harry Potter and the Escape from Gringotts is relatively tame if you’re a roller coaster enthusiast, but it offers great thrills for riders of all ages. We enjoy it every single time! Plus, the cinematic components are so much fun. Watch out, though — you might run into Bellatrix Lestrange and Voldemort in there!

Even if you’ve been on many simulated 3-D rides, we can guarantee that you’ve never seen anything like Race Through New York with Jimmy Fallon! From the beginning to the end, Universal has made sure this is a fully immersive experience for guests. We love it! The attendants, elaborate set, and queue area will make you feel like you’ve actually stepped into 30 Rockefeller Plaza! 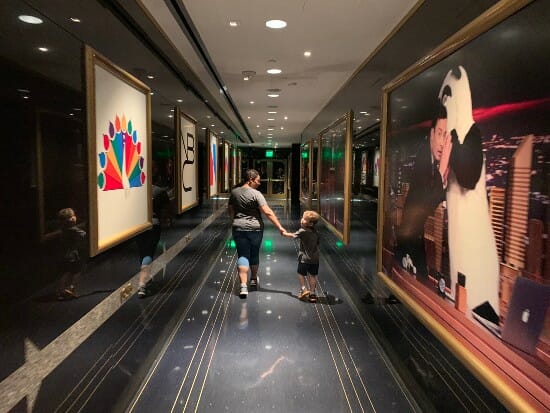 Unlike some of the other simulator rides at Universal Studios Florida, you’ll go through the experience as a large group sharing a single seating platform. There is movement, so you’ll have to secure your belongings, but you won’t feel jostled around. Instead, you’ll be in awe of the special effects and great music. Make sure you sing along!

While it might look a little intimidating from the ground, you’ll have an absolute blast on Hollywood Rip Ride Rockit! The loading area for this one is a little strange. It’s like a non-stop, bouncy conveyor belt and you need to move fast to get into the car. Don’t worry — if you struggle, they have an emergency stop button! It’s very similar to the one at Harry Potter and the Forbidden Journey, if you’ve ever ridden it!

Here are some ride specs for Hollywood Rip Ride Rockit:

Once seated, you get to choose the soundtrack for your ride. That’s right — each seat has its own speaker and you get to be the DJ! For our first go-round, Josh chose Gloria Gaynor’s “I Will Survive.” Fitting (haha!). Meanwhile, I went with something a little more badass — “Sabotage” by the Beastie Boys! Yeah!

With a 90-degree climb, this roller coaster’s start is intense, and cresting over the top is a truly unique experience. The rest of the ride is a heart-pumping, corkscrewing adventure that you won’t soon forget. I’ll admit, though, that some parts of this roller coaster are a little bit rough, so be prepared. Also, you can buy a video of yourself on the ride, so if you can afford it, this is a keepsake you won’t want to pass up!

As one of the older rides in the park, The Mummy might get overlooked, but it’s definitely worth the wait. Just the queuing area is pretty cool because you’ll see “artifacts” and other cool items from the film franchise. Not going to lie, though — when it’s very dark in those areas, I’m pretty terrified. It’s compact, so while you’re making your way to the loading area, you can feel the building vibrating from the ride. It just adds to the overall creepiness!

Here are some ride specs for The Mummy:

The ride itself is a little intense. We were pleasantly surprised (and a little shocked)!  Be forewarned, though, that younger riders might be a little freaked out by the special effects, but overall this is a fun experience with a few twists! Located completely indoors, it’s also a great way to get out of the sun for a while!

The building for Transformers is absolutely enormous. If you’re a fan of the cartoon or movies, your heart will start pounding the second you set your eyes on Optimus Prime. Doesn’t he look majestic up there? The leader of the Autobots is definitely making a case for why this should be included in the Top 5 Rides at Universal Studios Florida! 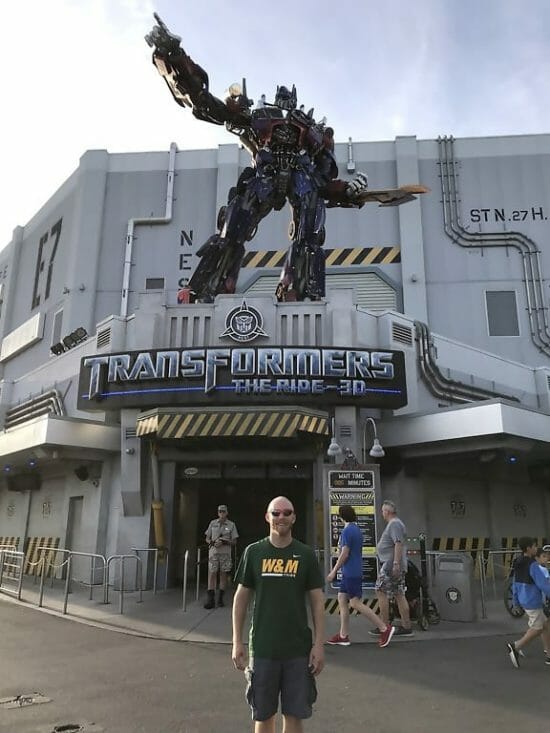 Inside, there’s a military-themed queue. When we first went, my younger daughter was 12 at the time and this made her a little nervous. She hadn’t really been on a lot of rides at that point, so it’s understandable that it was overwhelming. It was also the very first ride of the day, so maybe that was a little poor planning on my part too! The good news is that she wasn’t scarred by the experience. Just a few years later, she was taking world record-breaking rides at the base of Mt. Fuji in Japan, so if your kids are scared by this ride, they’ll probably be just fine!

This ride requires 3D glasses before you can start “your mission” which is a little tough for me. Due to my travel anxiety and OCD, I don’t love putting used glasses on my face. I always carry wipes and/or sanitizer with me to disinfect them before putting them on my face. Who knows if it actually works, but it makes me feel a little less stressed out about it!

This ride could use a refurbish to freshen up the graphics to reduce motion sickness and improve sharpness. We do know that Universal has removed 3D on some attractions, so maybe they will modify Transformers. No matter what, though, we enjoyed every jerky minute.

We agreed on our Top 5 Rides at Universal Studios Florida, but we each have an additional ride that we just love. Both of them are cheesy and we don’t care. If you have time, Josh recommends checking out Men in Black: Alien Attack. Personally, I thought it was absolutely terrible (haha)! We were thrilled to get a backstage look at the attraction, though, during our R.I.P. Tour during Halloween Horror Nights. Josh was so happy to get an up-close-and-personal experience of the ride after loving it for years. 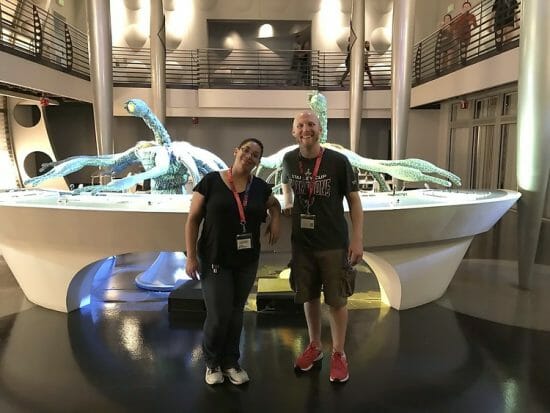 If the line’s short, my suggestion is Despicable Me: Minion Mayhem! It used to be 3D, but after Universal Studios Japan debuted a 2D version, both Universal Studios Hollywood and Universal Studios Florida followed suit. I haven’t been on it since the change, but when I do, I’ll come back and update this post!

What about you? Do you have any favorite rides at Universal Studios Florida? Are there any attractions that you absolutely cannot miss? We rode The Simpsons at Universal Studios Hollywood, and while the ride is very popular, there’s no way we could ever do that again! It made us too queasy!  Share your favorite stories with us in the comments section below!

Worried that the rides at Universal Studios Florida will be too extreme for small kids? Don’t fret, because there are a LOT of things you can do! Of course, it will all depend on your child. One of our kids has pretty intense motion sickness, so he doesn’t get to go on much, but he’s happy people-watching and enjoying all the things you can eat at Universal Orlando Resort! Our little Caleb, on the other hand, is quite the daredevil! 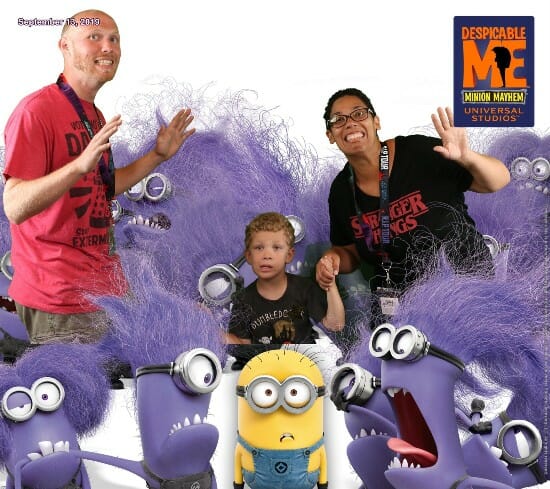 At four years old, he was just making it onto the rides with the 42-inch height requirement. One thing that’s annoying at all theme parks is that the measurements aren’t necessarily accurate or even consistent from one ride to the next. It’s really important to look at the height requirements at Universal Studios Florida before getting in line for a ride.

Have a conversation with your child and let them know that they might not be able to get on certain things to avoid disappointment. We have a video of Caleb crying because he couldn’t get on Hollywood Rip Ride Rockit. It never occurred to me to explain that he couldn’t ride a massive roller coaster!!! Fortunately, there’s a good list of rides that we’ve ridden with kids and enjoyed.

We hope you found this guide to the Top 5 Rides at Universal Studios Florida useful for your next trip. We absolutely love the park, which is why we go back year after year. Have a great time!