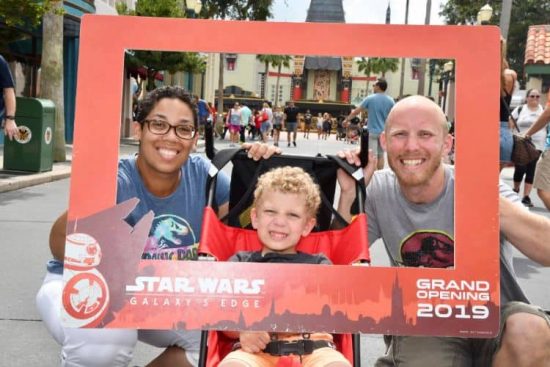 When my daughter and I were at Disneyland earlier this year, we missed the opening of Star Wars: Galaxy’s Edge by mere days. When Josh and I planned our trip to Orlando with Caleb, we made sure the timing was better. He is more of a Doctor Who fan and I love Harry Potter, but we definitely meet in the middle over Star Wars.

We feel so lucky that we got to go within weeks of it opening, so that we could participate in all Grand Opening goodness. As a result, we’ve come up with this guide to Star Wars: Galaxy’s Edge at Walt Disney World in hopes that it will help you when you’re in a galaxy far, far away!

Where is Star Wars: Galaxy’s Edge?

You’ll find the new Star Wars: Galaxy’s Edge park located at Hollywood Studios. It’s a bit of a trek from the front gate and it’s connects in a way to the new Toy Story Land. Once you turn that final corner, though, you’ll know you’ve found it. You can’t miss it, and you’ll instantly feel like you’re on the planet of Batuu in a galaxy far, far away!

Honestly, it was super hot on the day we visited Star Wars: Galaxy’s Run and I was growing a bit tired after days of theme parking but when we finally got there, it was worth it. It’s fully-immersive and you really do forget you’re at Walt Disney World.

Once you’ve made your way into Star Wars: Galaxy’s Edge, you’ll reach the main hub. There, in a large, central area, you’ll find Millennium Falcon: Smugglers Run. When we first saw the ship, it took our breath away! We couldn’t believe that we were seeing Han Solo’s ship right before our eyes! We were even more thrilled when we saw that the wait was only 45 minutes! 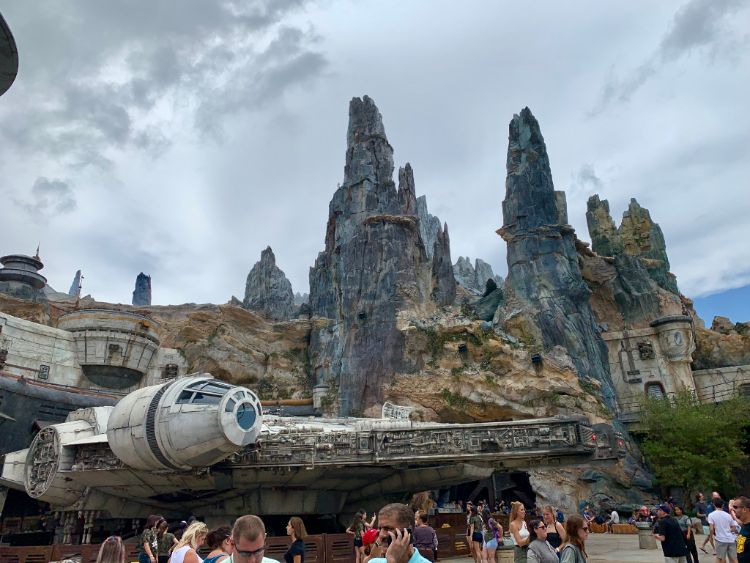 The queue for the motion simulator attraction is almost as cool as the ride itself.  There’s a lot to feast your eyes on as you make your way up the accessible ramp to the loading area. Along the way, you’ll almost always have a view of the Millennium Falcon and you’ll encounter refreshment stands.

One thing thing that surprised us, though, was that there were no recognizable features or figures mixed in with the cool set pieces. We saw intriguing pieces of machinery, little artifacts, and a character or two, but nothing we knew much about. While we were absolutely impressed, that part was a little disappointing. 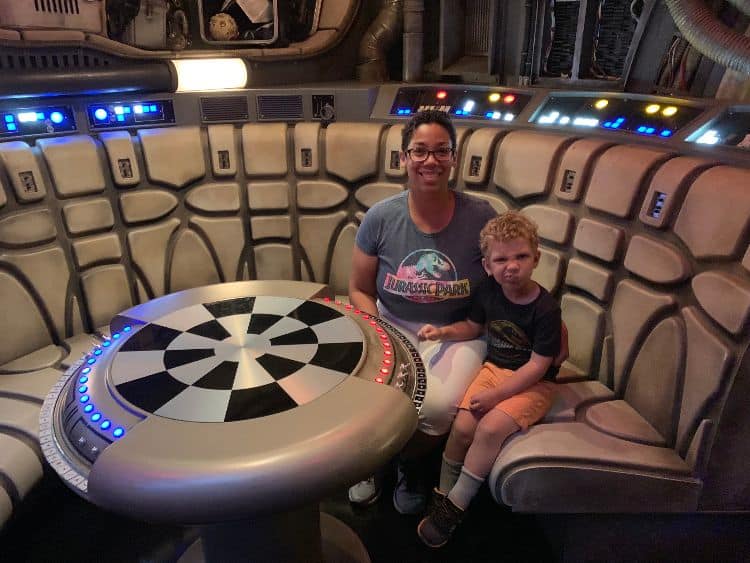 Once you’ve reached the loading area, you’ll be broken up into groups of six — two pilots, two gunners and two engineers. You’ll receive a color-coded card with your crew assignment, allowing you to step out of line and explore the area.

Of course, we had to take a minute and sit at this iconic table! Caleb was making a face because he didn’t want to take pictures. Instead, he wanted to just enjoy the moment (but I had to snap a few – come on!). 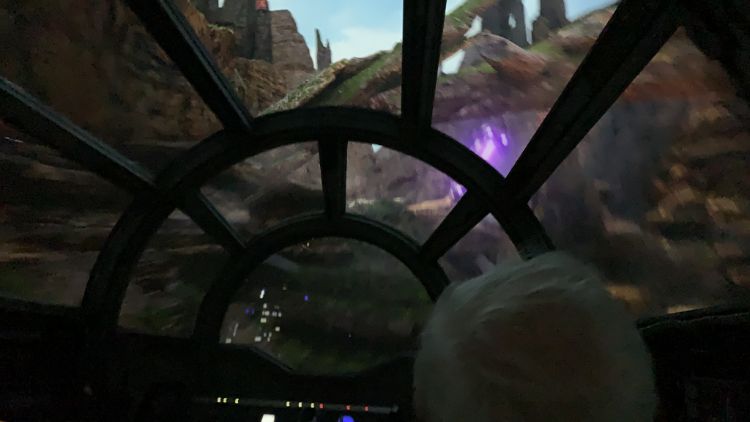 Josh had been assigned the role of a pilot, while Caleb and I were the Millennium Falcon’s gunners. The on-ride experience was super cool and the pilots really did control the flight trajectory. It was funny to have the engineers (a pair of Brits!) complaining about Josh’s driving. It felt like we were back home 🙂

The gunners could chose to between a manual and an automatic setting (recommended for kids – Caleb was too interested in watching than pressing a button). Without giving too much away, I’ll just say that this ride lasts 4 minutes and 30 seconds, and it’s worth every moment! This is definitely the best part of the whole Galaxy’s Edge area.

We were just as excited about the food and drinks as we were about the ride. Having heard so much about the offerings, we couldn’t wait to dig in. It’s easy to have a full belly at Star Wars: Galaxy’s Edge because there are numerous restaurants, stands, and shops in the area. We’ll be honest, though. To save on money we only tried one of everything and shared, but even our half portions were more than enough!

Here’s a list of the food and drink stations at Star Wars: Galaxy’s Edge:

The first thing we did was grab some blue milk from The Milk Stand. As avid fans, we’ve both seen Star Wars: A New Hope numerous times and had to try this iconic beverage. It didn’t taste anything like what we expected. I was expecting something creamy, like a blueberry-flavored, dairy-based beverage. We were both in for a surprise! 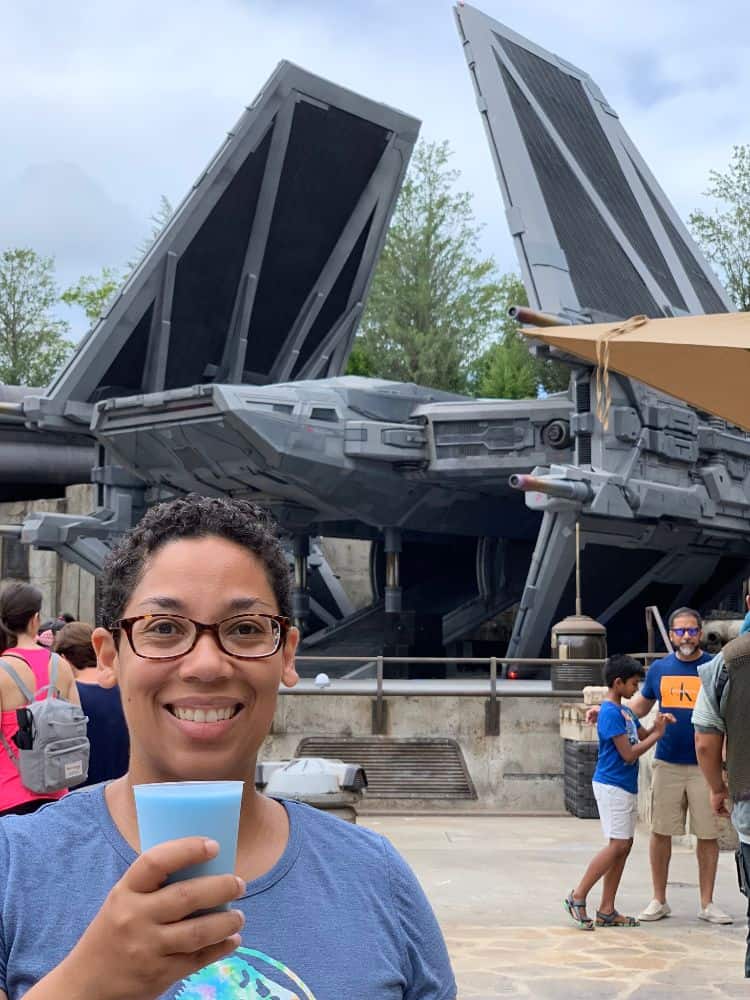 The texture was very, very light. It took me off guard, really. It was immediately clear that there was no actual cow’s milk in it at all. In fact, it’s made with non-dairy, plant-based rice and coconut milk!

The resulting flavor was so fresh and smooth, and it kind of reminded me of a blue-hued pina colada. It’s actually a combination of dragon fruit, pineapple, lime, and watermelon. Very tasty! We didn’t try the green milk, but we’d definitely have the blue one again. It felt nice and cool on a very hot day!

We had heard so much about the Ronto Wrap — it felt like it was the most shared food item on Instagram from Star Wars: Galaxy’s Edge. We headed to Ronto Roasters, which is right across from Oga’s Cantina and overlooks the Millennium Falcon. It’s a very convenient counter service in the shade, which was great on a steamy day. There was also plenty of seating and a few shops in the adjoining space.

The Ronto Wrap is HEAVEN! Oh my goodness. There are no words to describe how delicious and surprising that first bite was for both of us! We should have bought two, and if we ever go back, I’m not sharing!

The sandwich is comprised of a sausage wrapped with grilled pork and pita, then topped with slaw. I’m not usually a fan of sausage, but I made an exception for this (so glad I did!). The sausage was well done but still very juicy. The pork was tender with a very subtle complementary flavor, and the slaw added a nice, fresh crunch. The pita was a little bit big for our liking, but overall this was the best thing at Star Wars: Galaxy’s Edge! 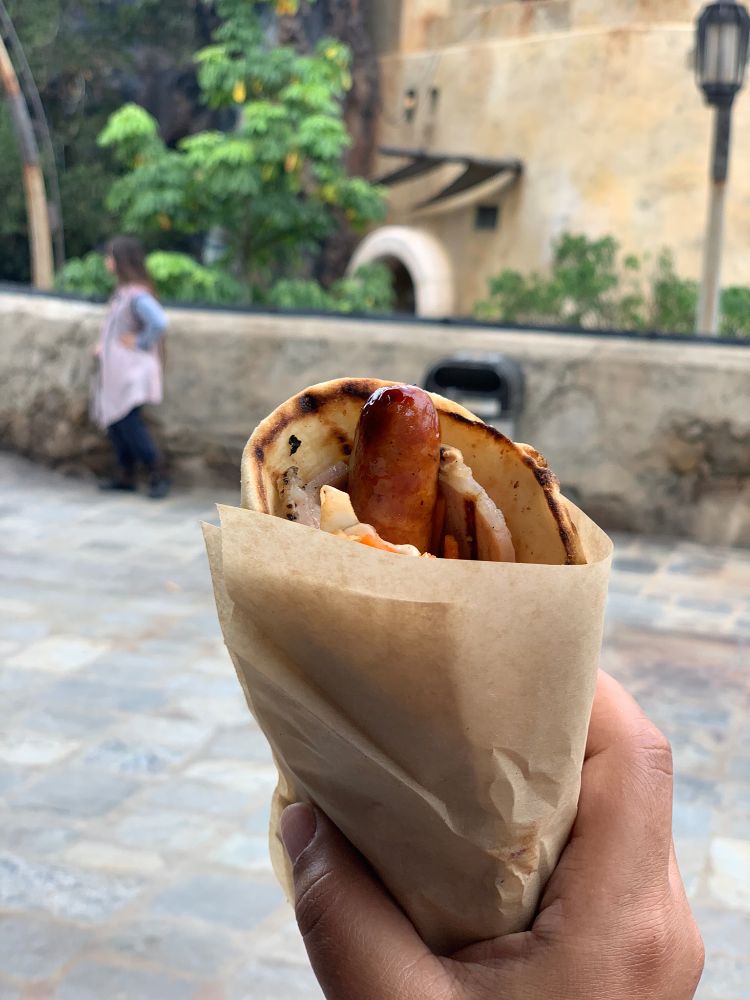 Just down the walkway from Ronto Roasters is Docking Bay 7. We didn’t get a chance to eat anything there, but it was a full sit-down restaurant with great theming. The menu looked great and the prices were on par with the rest of Disney World. We were just too full to eat anything by the time we made it there!

If you want to get into Oga’s Cantina, it’s recommended that you make a reservation on the Disney website or with the My Disney Experience app.  We walked up on the day we visited, put ourselves on the list and we were able to get in after about a 10-minute wait. 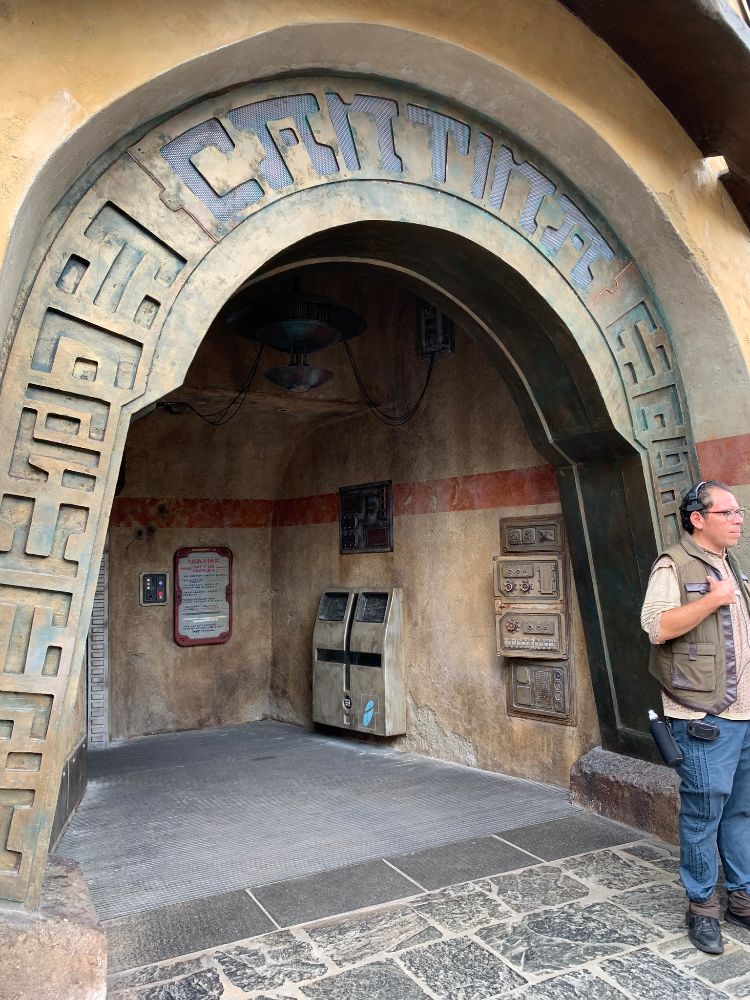 Before being allowed to enter, we were told that there was a 45-minute and two-drink limit once we got inside and to save our picture-taking till the end in order to keep things moving efficiently.

You aren’t allowed to decide where you sit and most of it is standing room only, so we knew we wouldn’t stay long with a stroller. We got the Hyperdrive (Punch It!) to share which is mostly just blue Powerade and then left. 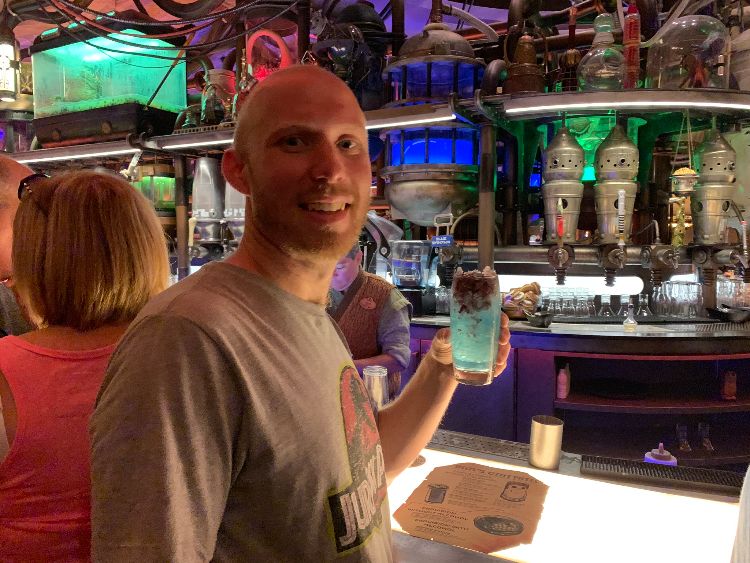 It was cool, but just too busy for us. Plus, if I’m honest, I was expecting to see some more familiar things in there. There wasn’t a whole lot that I recognized — it just felt like a cool bar in outer space.

If I could go back in time, I’d grab the multicolored popcorn from Kat Saka’s Kettle! I’ve seen so many people talking about how unique and delicious it is, but I was distracted by Caleb. By the time Josh ran to grab a drink from there, I wasn’t thinking straight!

He didn’t come back empty-handed, though. He grabbed this super cool bottle of Coke that we were able to bring home. Sometimes, souvenirs are easy to come by!

There are many small shops at Star Wars: Galaxy’s Edge. If you miss out on the chance to buy something, though, you can find some cool things in the shops on Hollywood Studios’ main drag. Here are some places to find mementos:

The shops at Star Wars: Galaxy’s Edge were packed and they’re not very big. It was thrilling to spot R2D2, though! The droids are controlled by Disney cast members, but you’d swear you were interacting with the real Artoo! 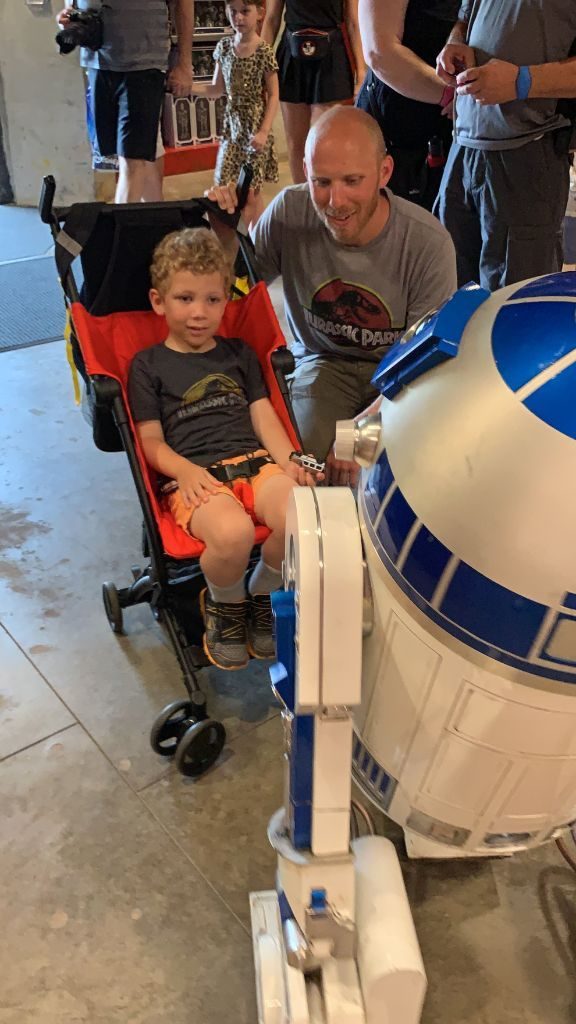 Then we took a picture together and I actually shed a few tears. Not even kidding! It was so exciting and after a day of being “mom” at a theme park, it was so great to feel like a little girl again for a few minutes! We tried to find some souvenirs, but we didn’t love the selection.

There are many, many places where you will want to stop for photo ops. We really loved all of the different settings, but it’s hard to argue with the magnificence of the Millennium Falcon as a backdrop! The images get added to the PhotoPass app which makes them easy to share! 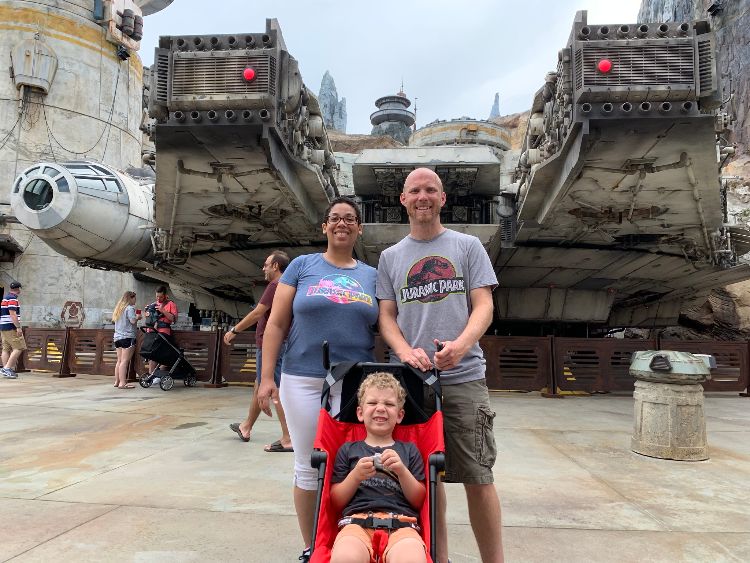 One super cool thing is that the employees, who stay in character, offer to take photos with guests’ cell phones. One approached us and asked if we wanted her to take a “Holoscan” with our device. That kind of thing is really cool.

It’s a little too early to name the best times to visit Star Wars: Galaxy’s Edge. The area is still too new. We went on a Friday morning in the second week of September, fully expecting massive crowds, but it was pretty chill.

As mentioned, we waited 45 minutes to get on Smugglers Run . It may have even been faster than that. We also never waited more than two or three minutes for food or drinks. Although, it did take about 10 minutes to get into Oga’s Cantina.

The Disney Parks president has stepped down due to poor attendance at both Galaxy’s Edge locations and employees are seeing their hours cut.

Is Star Wars: Galaxy’s Edge Worth the Money?

At the end of the day, unless you have tickets to all of the parks at Walt Disney World, you will have to pay to get into Hollywood Studios if you want to see Star Wars: Galaxy’s Edge. This can add a considerable expense if you were just planning a day at Magic Kingdom or Epcot.

So, is Star Wars: Galaxy’s Edge worth the price of admission? It depends. There’s not a lot for small kids to do, there’s only one ride (currently) and there isn’t a lot of shaded areas. If you’re a super Star Wars fan, then you will probably enjoy it — once. I’m not sure we’ll go out of our way to go back, especially while the kids are small.

What’s the problem? We felt that, unlike the Wizarding World of Harry Potter, this zone falls short on making emotional connections with fans. There are not enough recognizable things for people to latch onto. At Wizarding World, you go to the famous shops of Hogsmeade, you go through the Forbidden Forest with Harry, and you ride on the Hogwarts Express with your favorite characters.

At Galaxy’s Edge, it just feels like you’re in some very impressive back corner of the Star Wars universe. We loved seeing the Millennium Falcon, trying Luke’s blue milk and seeing the Stormtroopers. Aside from that, it was super cool but we didn’t feel much.  Let’s hope they work on this because there isn’t a lot of traffic heading their way!

What do you think? Have you been to Star Wars: Galaxy’s Edge? Is it worth a trip? We had a great time, but we’d love to hear from you. Leave us a comment! 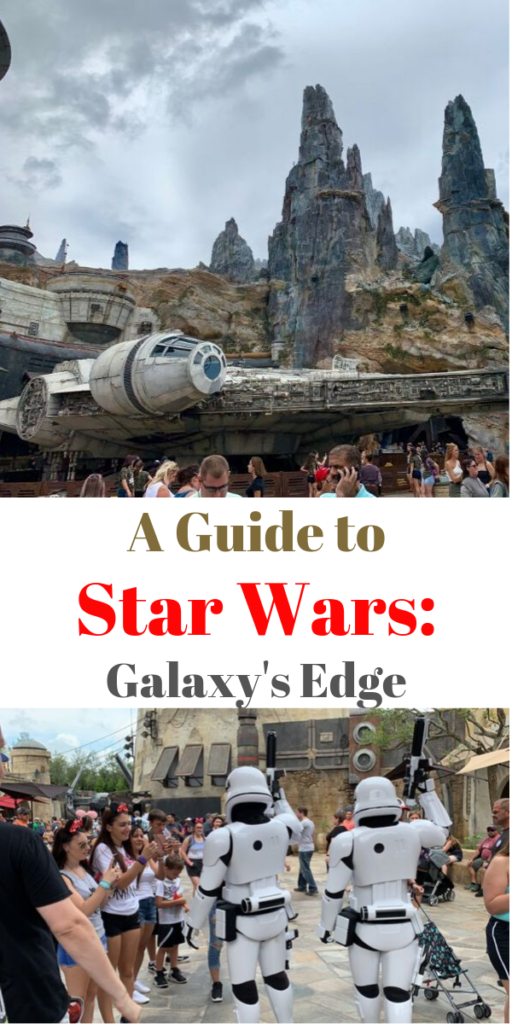