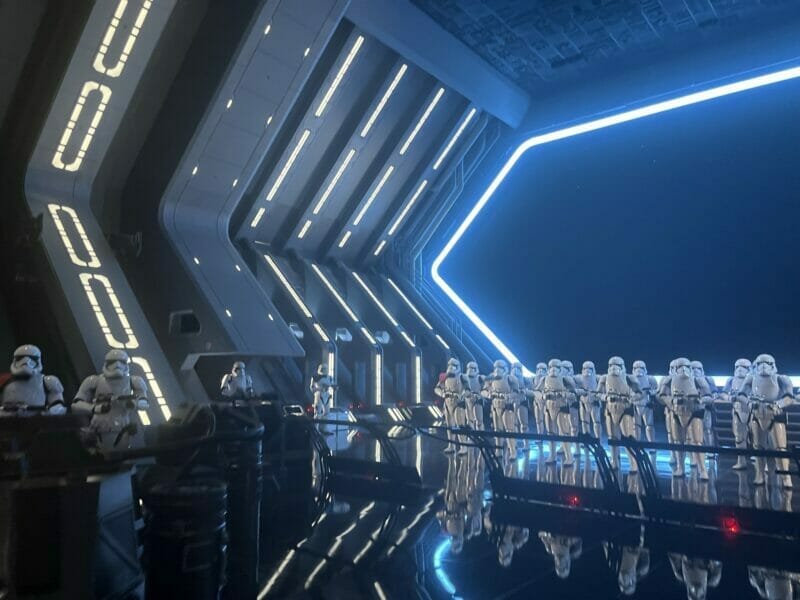 We’re huge Star Wars fans and we made an effort to get to Star Wars: Galaxy’s Edge during the opening at Walt Disney World Resort. We had the best time, but unfortunately, Rise of the Resistance was completed a few months after the area opened. We chose not to go to any theme parks during the pandemic (although, lots of people did!), but we finally did for the first time in two years! Now I am thrilled to answer this question: how scary is Star Wars: Rise of the Resistance at Disneyland?

Star Wars: Rise of the Resistance

The first thing to know about Star Wars: Rise of the Resistance is that it’s an immersive experience. Here’s a description from the Disney website: “The Resistance needs your help! Hidden in the forest outside Black Spire Outpost, the Resistance is gathering recruits for a secret mission.”

As a fan, I’ll say that this ride is full of surprises, so I don’t want to go into too much detail. While Millennium Falcon: Smugglers Run is cool in so many ways, this is just on a whole other level. From start to finish (and this is a LONG ride), Disney has put a lot of effort into giving you a realistic experience. It’s really great!

Is Star Wars: Rise of the Resistance a Roller Coaster?

No, Star Wars: Rise of the Resistance is not a roller coaster. It is kind of like a dark ride and you will be strapped into a car that fits eight people, with four in each row. It’s jerky and there are a few unexpected drops, but nothing too crazy. I’d take my five-year-old on this!

Here are some quick facts about Star Wars: Rise of the Resistance:

As you can imagine, the queue area for Star Wars: Rise of the Resistance is pretty cool. It has some dark, narrow areas, though, so if this is something that makes you nervous, plan ahead. We paid for the Genie+/Lightning Lane passes so we moved through the line very, very quickly. In the meantime, we got to see incredible Star Wars-inspired sets — you’ll have plenty to look at while you wait!

You will have done a LOT of things before you get to the actual loading area. At one point, you will be standing in a moving vehicle while you are transported to the next area. After going through several experiences, you will load into the vehicle. There are four people per row and a small lap restraint. It’s pretty roomy and comfortable!

Is Star Wars: Rise of the Resistance Scary?

There are some dark, narrow areas that may be tough for anyone with sensitivity to tight, enclosed spaces. This includes being concerned with being packed next to others during a pandemic. If this is an issue, consider the Lightning Lane pass to get through the line quickly (it took five minutes for us).

If you’ve watched any Star Wars movie, you’ll know that they aren’t always terribly bright, especially when dealing with the First Order. It’s dimly lit in many areas, but I’ll say that I HATE the dark on rides (I scream on the Matterhorn Bobsleds) and I don’t remember having any problems.

There is no lift on this ride.

You will be moving around in a car and it will feel like you’re driving to escape something. You should expect sharp turns, spins, abrupt stops, and other sudden movements.

There were to people prone to nausea in our group, and neither of us experienced any! We did, however, follow our guide on how to prevent motion sickness on rides and it worked like a charm!

There is no real drop on this ride, but there is a sudden little one. It’s nothing like a real roller coaster or Tower of Terror or anything like that!

Your car will be zipping around, stopping and starting, so you won’t accelerate too much.

The restraints should not be a cause for concern on this ride. You will feel safe without feeling too restricted.

Best Things About Star Wars: Rise of the Resistance

Is Star Wars: Rise of the Resistance scary? You’ll have to decide for yourself. You will be in awe of the visuals as you move through this experience. It’s 18 minutes of being fully immersed in the Star Wars universe, and I’m a little teary just thinking about it if I’m honest. The cast members do an incredible job, and the set is massive. It’s absolutely MASSIVE.

You will feel rushed (I won’t explain) through the walking areas, but it’s totally okay to slow down and take some pictures if you want to. I wish I had paused a little more!