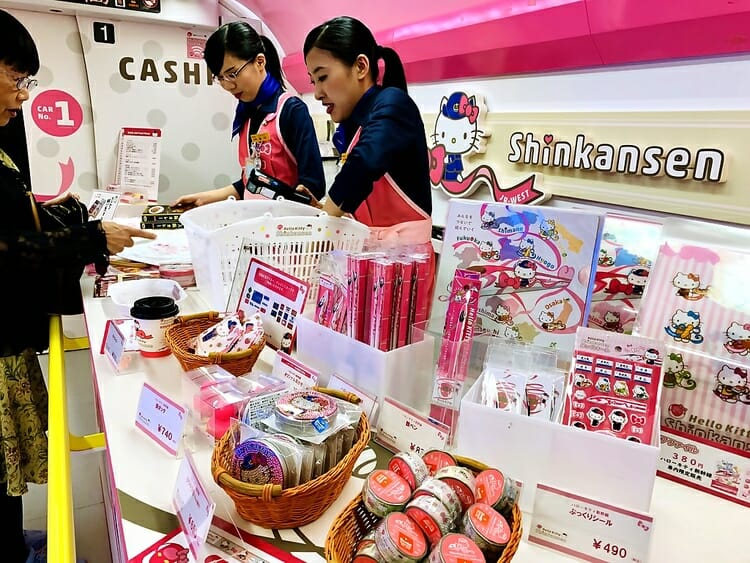 I’ve been a Hello Kitty fan for years, so when Josh discovered that a Hello Kitty bullet train existed, I completely lost it. Can people really travel on something so cute? It turns out that we can! It was so amazing, and definitely one of my favorite ways to see Japan by train. That’s why I knew I’d have to share this Osaka to Hiroshima Shinkansen option with my readers!

The Hello Kitty bullet train debuted on June 30, 2018, through the Japan Railway West (JR West) Sanyo Shinkansen line. As such, it’s included with the JR Pass. Yay! It’s a limited edition train, so it’s best to always check to see if it’s running when you’ll be in Japan.

How to Ride Hello Kitty Shinkansen

To ride the Hello Kitty Shinkansen, it’s a good idea to reserve a seat. It can get really busy because it’s so popular. For an extra special experience, ask to be seated in the Kawaii room, which is a very special car with an incredible Hello Kitty theme.

We got pretty lucky, though. Although we didn’t have time to reserve our seats, we arrived early and stood at one end of the platform. We were the first to board (after the crew thoroughly cleaned it — a dream come true for people with OCD!) and there was plenty of room in our car. This Osaka to Hiroshima Shinkansen experience really was the best!

First things first, this is a Kodama Shinkansen which means you won’t be traveling as fast as the Nozomi. So, it’s probably best not to ride the Hello Kitty bullet train if you’re in a rush. As you may have guessed, this JR West train’s route is restricted to the western part of Japan, so don’t expect to see it in Tokyo. These are the train stops:

For our trip, we took the train from Shin-Osaka to Hiroshima and it was really wonderful. If you’re coming from Osaka, you will need to go to the Shin-Osaka station for this to work. The scenery was absolutely gorgeous and because we were moving a little slower, it felt like we could appreciate the view more.

We’ve said it before and we’ll say it again — being in Japan is SO good for our anxiety. Some places just feel like home, even if you weren’t born there, and that’s how we feel about Japan. So, it shouldn’t be a surprise that our experience aboard the Hello Kitty Shinkansen was positively perfect. We really had such a great time.

First of all, it was SO clean. Even the bathrooms were spotless! Our seats were purple and flawless and the whole train car was pink, white and purple. How can you not feel happy in surroundings like that? We sat back and enjoyed some snacks that we purchased from the 7-Eleven before boarding.

With our tummies full, we made our way through the train to check it out. Each car was pretty similar until we reached the Kawaii Room. It was so colorful, there was storage for luggage and there were plenty of spots set up for photo ops. Hayley jumped at the chance to pose with Hello Kitty, of course!

Then, we made our way to the Hello Plaza (the first car on the Hello Kitty train) If you’re looking for souvenirs to commemorate your ride, that’s the place to go. We found toys, cookies, and other little mementos. There were no passenger seats, but there were a couple of benches where people could sit and enjoy a treat.

Overall, this Osaka to Hiroshima bullet train experience was so great! It took a little longer to get to Hiroshima, and we ended up taking the Nozomi back to Osaka, but it was worth the extra time! Honestly, I’m not sure what we would have done without the JR Pass. It gave us options and saved us so much money. We can’t wait to go back to Japan!