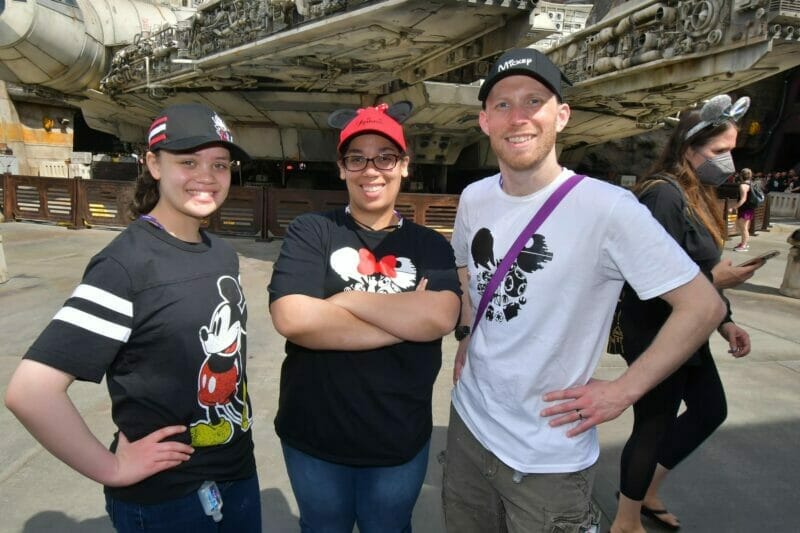 Back in 2019, we went to the opening of Star Wars: Galaxy’s Edge at Walt Disney World Resort. It shocks me that I never wrote a post about our experience on this ride, but I think I was backed up with other posts and assumed I had all the time in the world. Wrong! Thanks, pandemic! Anyway, here’s a quick answer if you’re asking the question: how scary is Millennium Falcon: Smugglers Run?

So, what’s this ride about? Here’s a description from the Disney website: “Ride in the famous cockpit of the Millennium Falcon on a daring flight—and whether you’re a pilot, engineer or gunner, every role is crucial…Will your mission succeed or fail? It’s up to you—find out if you have what it takes to outmaneuver the odds aboard the Millennium Falcon.”

As someone who has seen every single Star Wars film in the movie theater (okay, to be fair I was a baby when I was taken to A New Hope!), I can tell you that the idea of stepping onto the Millennium Falcon made my heart race. They spared no expense with this ride, and I could not have been happier!

We were also really lucky with wait times — I don’t think we waited more than 15 minutes.

No, Millennium Falcon: Smugglers Run is not a roller coaster. You will go through the ship on your way to the cockpit, each holding six people — two pilots, two gunners, and two engineers. It’s a simulator that will move around and get jerky, but it doesn’t go anywhere.

Here are some quick facts about Millennium Falcon: Smugglers Run:

You will move through some outdoor spaces that have cargo, smaller ships, and other cool things to look at. It’s fairly roomy and our son was able to comfortably eat a banana while we made our way to the loading area.

The loading area on Millennium Falcon: Smugglers Run is super fun. Just outside of where you’ll enter the cockpit/pod, you can sit at the Dejarik board (also known as holochess) and pretend to play a round while you wait. Then, once loaded inside of the pod, you’ll each have your own seat and seatbelt. There is a LOT of space between seats.

There is nothing in the queue that would be scary for most people.

This ride does not have many fully dark areas, but there are moments when the lighting is dimmed.

You will be simulating a flight on the Millennium Falcon. It’s called Smugglers Run, so you can imagine that there will be “conflict.” You’ll have to shoot and fly your way out of danger so there will be alarms, shouting, jerky movements, and even crashing sensations.

There is no drop on this ride.

The restraints are simple lap seatbelts and should not feel overly restrictive for most.

Josh and I are both prone to motion sickness, but he’s much worse. Neither of us had any problems on this ride, but we also followed our own protocol for preventing motion sickness.

This is a really wonderful, high-quality experience for anyone who loves Star Wars films, but you’ll have plenty of fun even if you don’t. We had a couple of guys with us (strangers) who had never seen a single movie in the series, and they were hilarious!

You can easily enjoy this adventure as a family. Our child was four years old when he served as a gunner on Millennium Falcon: Smugglers Run and he had a blast! There weren’t any moments when he said he was scared, so this is a decent choice unless your child is easily frightened (we have one like that!).