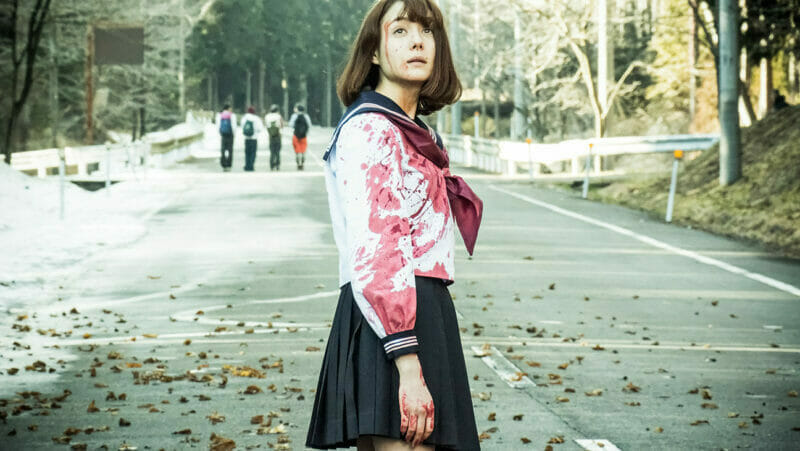 Looking for the scariest Japanese horror movies online? We’ve put together a list of 11 of the best classics and newer releases you can stream today. We can’t rank these amazing flicks, so we’ve put them in chronological order. Also, we didn’t include Ringu (or its American remake, The Ring) or Ju-On: The Grudge because they are so well-known. If you haven’t seen them, though, it’s definitely worth a watch!

Getting ready for the spookiest season ever? You’ll definitely need the right snacks. Be sure to check out our list of the best online Asian grocery stores to get what you need. We love to have ramen and sake, followed by our favorite chips and chocolate. Splurge a little!

You really can’t go wrong with this beautiful, visually-stunning classic. Many critics list this among Japan’s best films ever. Set in 16th century Japan, the story follows peasants, Genjuro and Tobei, who defy a local sage’s warning by selling earthenware pots to soldiers in a nearby village. Will profiting from war destroy them and their wives?

Another amazing classic, this ghost story takes us to war-torn Japan in the 14th century. The plot follows a mother and her widowed daughter-in-law as poverty forces them to make terrible choices. To survive, they must murder and dump the corpses of lost soldiers and sell their possessions. When the daughter-in-law becomes the object of a returned soldier’s affection, her mother’s jealousy leads to terrifying consequences.

What’s worst? A vengeful ghost or a disturbed human? This movie will help you decide! As the title implies, a widower is looking for a new wife, so he holds auditions. This should be a red flag, but we do live in the age of The Bachelor, but I digress… Through this process, he finds a lovely new wife, but she comes with some creepy baggage. Literally…

Watch it on Amazon and Shudder.

Are there words to describe how scared I felt watching Dark Water? Yes, I know there’s an American remake. It’s good, but the original is much better. This is definitely one of the best Japanese horror movies online right now! The story follows a single mother in the middle of a nasty divorce. In an effort to prove she’s fit to retain custody of her daughter, she moves into a sketchy apartment building. Things go very badly from there.

Did you hate any of your teachers in school? We guarantee none of them compare to the one in this movie! After two students killed her daughter, she’s determined to get revenge on an entire school of unsuspecting kids. It’s sadistic, it’s horrifying, and glorious all at the same time.

You’ll never look at aquariums the same way after watching this! Inspired by the real-life crime story of Gen Sekine and Hiroko Kazama, a couple who killed four people in 1993, this film will make you want to leave the lights on. The plot follows a fish shop owner who’s also a serial killer. He buys another shop, though, to torment the previous owner and his family. Be ready for this one!

As the sole survivor of a freak school bus accident, Mitsuko suddenly finds herself in a surreal and remarkably violent alternative universe. This unconventional, feminist flick is one of the most fun Japanese horror movies to watch online. Fans of the Terrace House reality TV show will recognize (and love!) star Reina Triendl.

Watch it on Amazon, Netflix, and DramaCool.

What would happen if you put the ghosts from The Ring and The Grudge against each other? This crazy movie gives you the answer! After a woman watches Sadako’s cursed videotape, she comes up with the brilliant idea of pitting her against Kayako. Who will win this insane battle?

Based on a manga and anime, Tokyo Ghoul takes us to a world where flesh-eating ghouls exist — but they walk around every day behaving as regular humans in society. Makes me wonder about some of my former coworkers… Anyway, you’ll follow a college student who undergoes surgery after surviving a ghoul attack. The problem is that he received an organ from his attacker, and now he’s turning into a half-ghoul. It’s dark, gory, and campy. What’s not to love?

Watch it on DramaCool, Funimation, and Vudu.

If you love zombie movies, particularly ones like Shaun of the Dead, you’ll probably like this! The actors of a low-budget film about the undead end up surrounded by the actual flesh-eating monsters themselves! The director decides to keep the camera rolling to capture the carnage, and the end result is a weird (and fun) mix of gruesome gore and riotous comedy. Worth the watch!

From the creator of Ju-On: The Grudge franchise, this film takes us to a real place in Fukuoka Prefecture — Inunaki Tunnel and Inunaki Village. It’s said to be one of the most haunted areas in Japan. You can easily visit the tunnel in real life, but it’s unclear whether the village actually exists. The tunnel has been mysteriously sealed and this film follows a psychologist who wants to find the truth after her brother goes missing. Honestly, this is a really scary one, so be ready!