Every day, living with anxiety and obsessive compulsive disorder (OCD) is tough. Some situations are easier than others, but almost every daily task comes with a challenge. Years ago, when I first visited Japan, I remember feeling so much calmer. As time passed, however, I wondered if I had only imagined it. Was it really possible that Japan helped my anxiety?

When my daughter (who also lives with OCD) and I visited Japan together recently, we couldn’t believe how much it impacted our emotions. By the end of the second day, we were both so much calmer than we typically feel on a trip, which was surprising! Normally, travel anxiety would have added to our stress, but despite being far from home, we were doing great. Why? Here are seven ways Japan helped my anxiety and OCD (and why we want to move there).

During cold and flu season, I’d give anything to feel comfortable wearing a mask out in public. Yes, more people are doing this, but at least where I live, it’s quite rare. In fact, when I landed in Boise wearing one, an airport employee mocked me! It’s so strange to us that people in North America have such a strong opinion about something that really has no impact on them, but I digress…

Of course, wearing masks in Japan is very common. There are even sprays you can add to them to enhance their germ-blocking power. We wore masks often during our trip and it made us feel so much calmer and more secure. It’s one of the main ways Japan helped my anxiety.

If there’s something I absolutely hate, it’s using a public toilet. My mind is terrified that someone got sick in the stall that I’m using. Plus, they tend to be gross and rarely maintained at a level that is anywhere close to sanitary. People leave messes behind, the air is often stanky, and we definitely don’t sit on the nasty toilets. 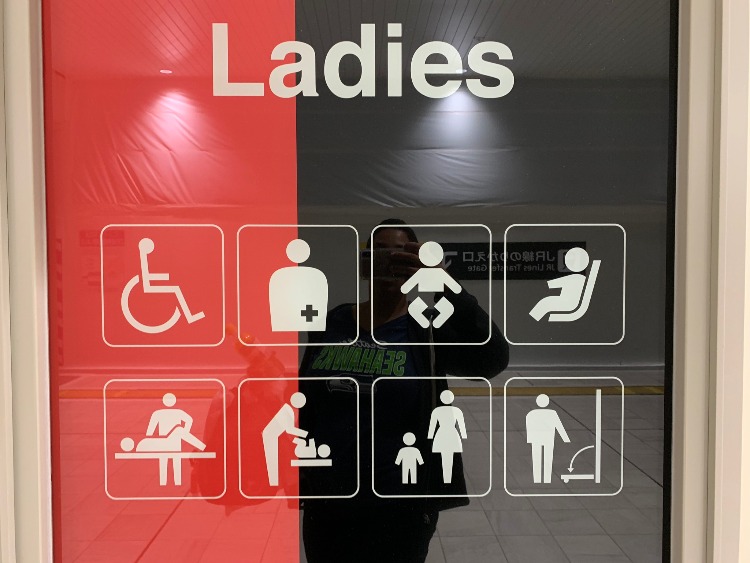 In Japan, even at the airport, the facilities were amazing. There was always a disinfectant spray and/or wipes to clean the seat, the toilets were equipped with a bidet function, and the air was deodorized. Not once was I scared to use a bathroom in Japan!

Eating at restaurants can be quite challenging. We’ve even written a post about how to not get sick at restaurants. We don’t want to use our hands, but there’s usually so much packaging that we’re forced to. Also, we like to sanitize right before we eat, but we tend to avoid fast food places because it’s just too hard. 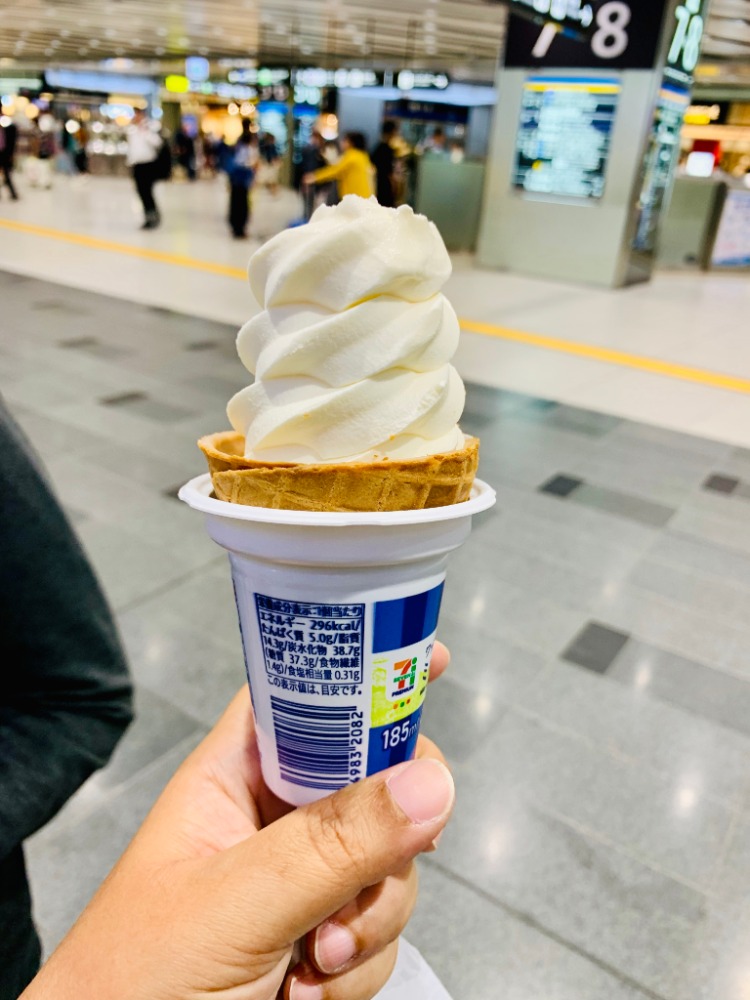 In Japan, food from convenience stores and affordable restaurants make it so easy. Whether you grab a hash brown from 7-Eleven or apple pie from McDonald’s, the packaging is designed to tear away. This allows you to eat without having to touch your food. Not having to worry about whether my hands are clean? Yes! This is one more reason why Japan helped my anxiety. 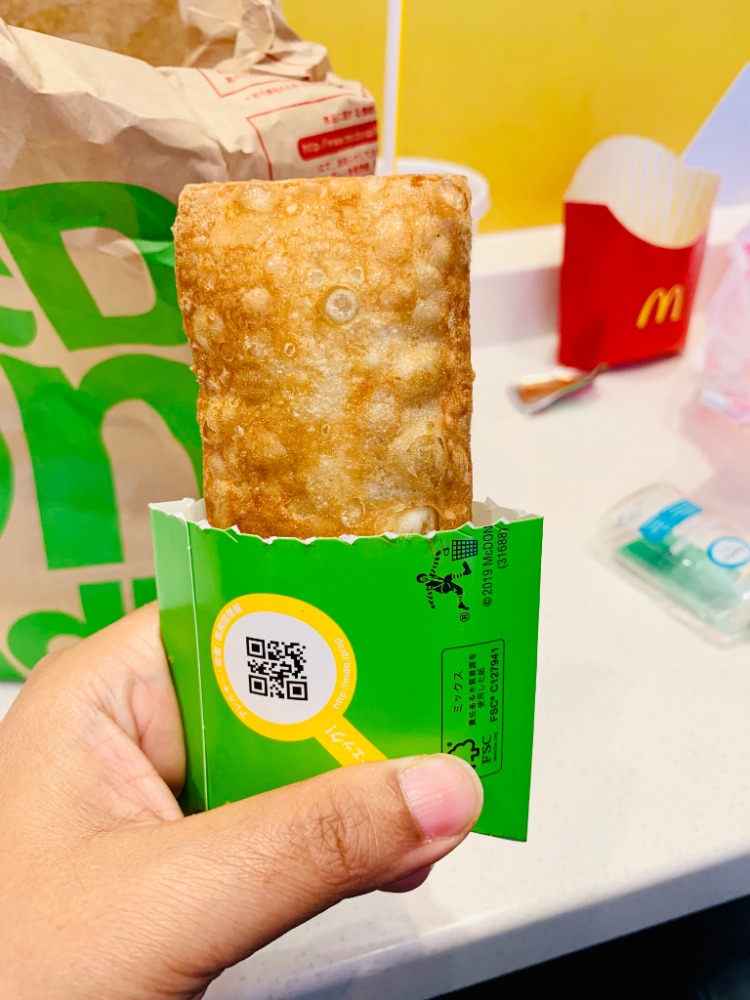 Even the condiment packets are made to be squeezed directly onto foods like corn dogs (known as Jumbo American Dogs in Japan) in a neat and sanitary way. When you’re done, wipes are provided to clean your hands. It was so amazing that we could hardly handle it.

There’s a way to do everything in Japan. While this might annoy some people, this was a dream come true for us. We absolutely hate disorder and Hayley was worried that, with how packed Japan can be, this might be a problem. 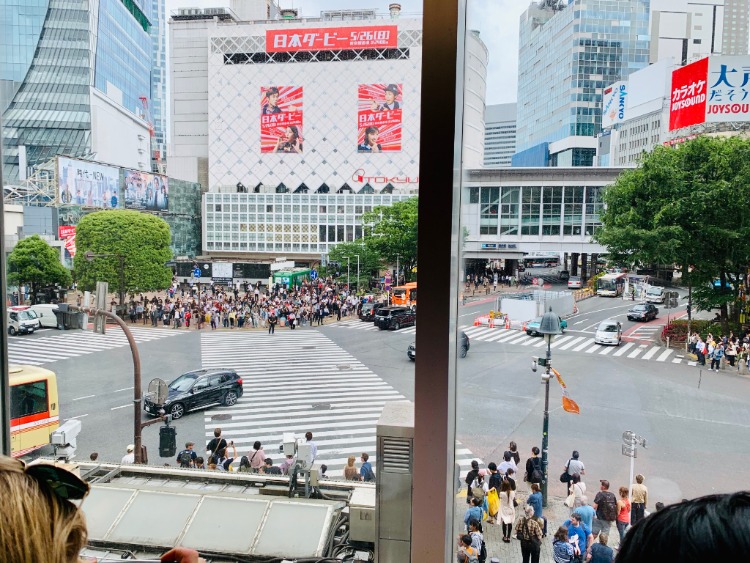 Stand behind the line on the ground when queuing up to pay at the store. Follow the arrows on floor in train stations to know which direction you should be walking. Wait for the crosswalk to let you know when to stop and go (even at a crazy place like The Scramble!). We found comfort in that predictability and we miss it very much.

When we were on the Shinkansen (bullet train), we noticed that an attendant would walk through periodically. Sometimes they wanted to check tickets. Other times it seemed they were just there keeping an eye on things. No matter the purpose or how empty the train car, though, he would stop and face the seats and bow respectfully. Then, he’d move on to the next car. 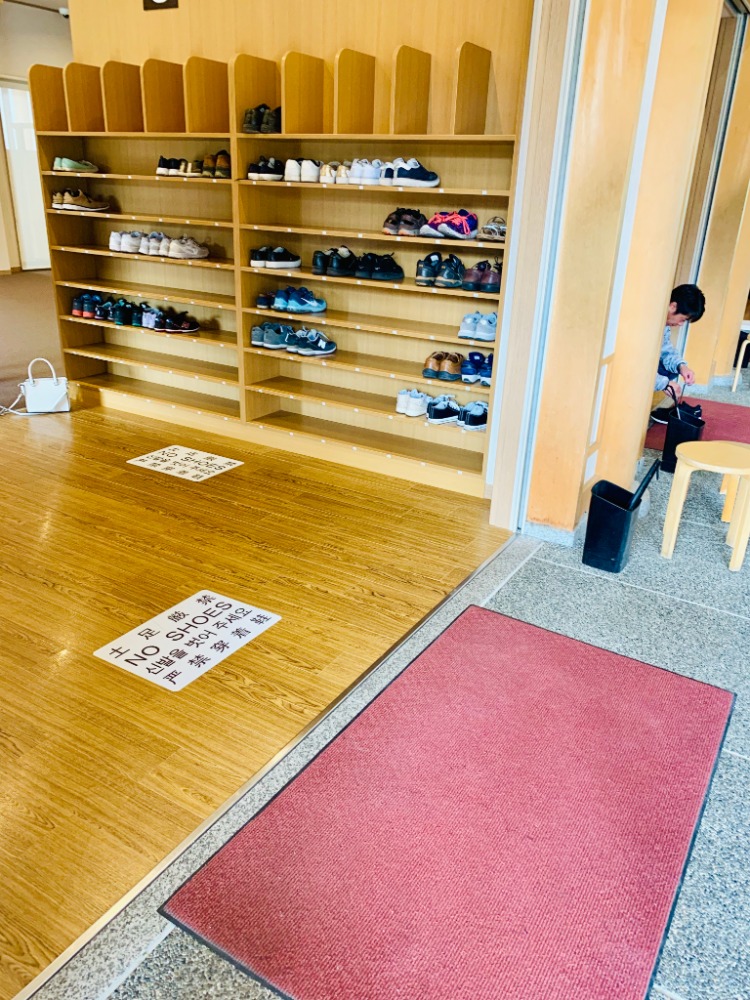 You don’t walk into shrines with shoes on and people patiently wait their turn. No one takes up the full sidewalk and people generally follow the same set of rules. The resulting feeling is a great emphasis on respect for others, and we miss that every day.

Hayley and I encountered some hiccups on our flights to Japan. In fact, we had to land in Tokyo instead of Osaka. Fortunately, United is partnered with All Nippon Airways (ANA), so they arranged a short flight for us to Itami (the smaller Osaka airport) and we learned right away that people are very quiet in planes, trains, and buses in Japan. 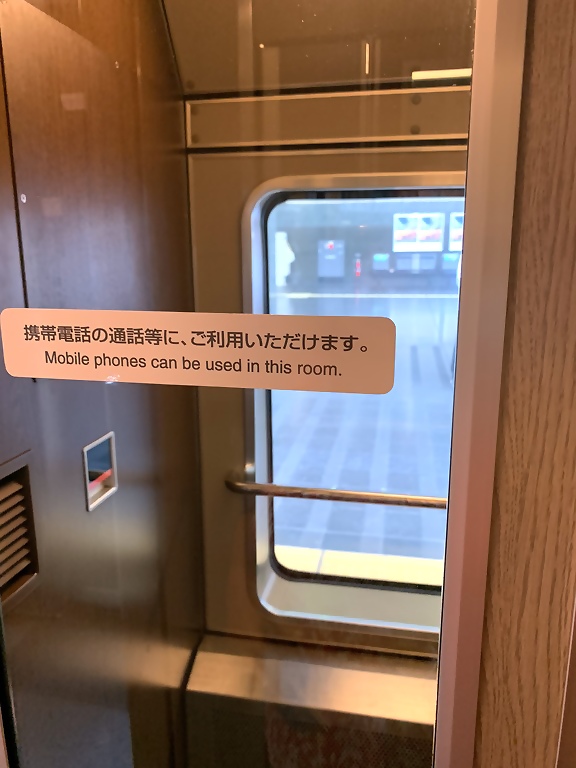 Exhausted and giggly, we struggled to maintain composure on our shuttle bus from the airport, but after that, we fell in line. By the end of our trip, we adored this way of commuting. The time spent on transit is used for resting, relaxing, and reflecting (don’t forget snacking, too!).

No Eating/Drinking on the Go

We’d heard about this before, and we warn everyone we know, but there really is no eating or drinking on the go in Japan. You won’t see people walking down the street with cups of coffee or a bagel. Maybe that’s why there are no garbage cans (or litter) to be found! 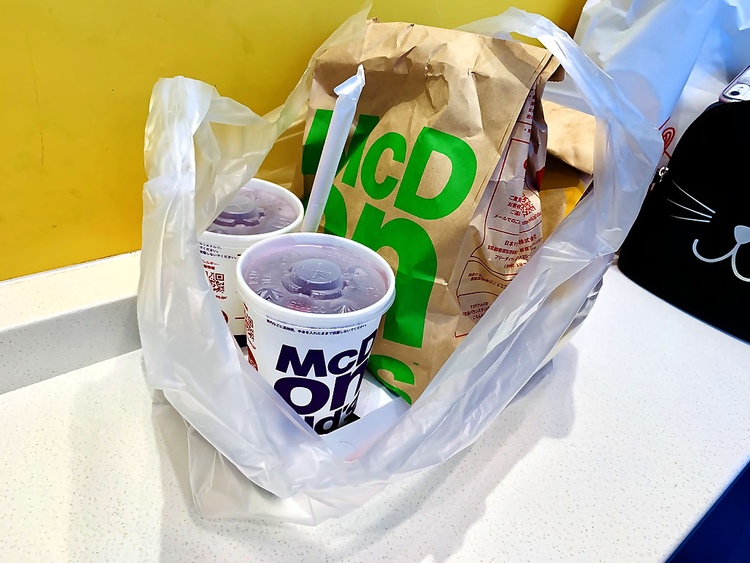 When you purchase food and drink, you stop and eat it where you are. Then, you recycle and discard your items before continuing your day. To go orders are packaged very carefully, even at Starbucks and McDonald’s. With the expectation that you’re carrying your food somewhere, they want to make sure it gets there securely. Drinks are even carried in a special carrier inside the same bag as your food!

You can sometimes sit outside and eat/drink, but only if you find a bench (those are rare too!). Some benches even have signs saying they are meant for resting and not snacking. At first, this was a bit annoying and inconvenient, but we came to appreciate this. Every time we ate, we paused and enjoyed our food rather than just unconsciously eating.  This was an unexpected way Japan helped my anxiety.

Every day, we find ourselves pining for Japan. We hope to get back there soon and stay there permanently! 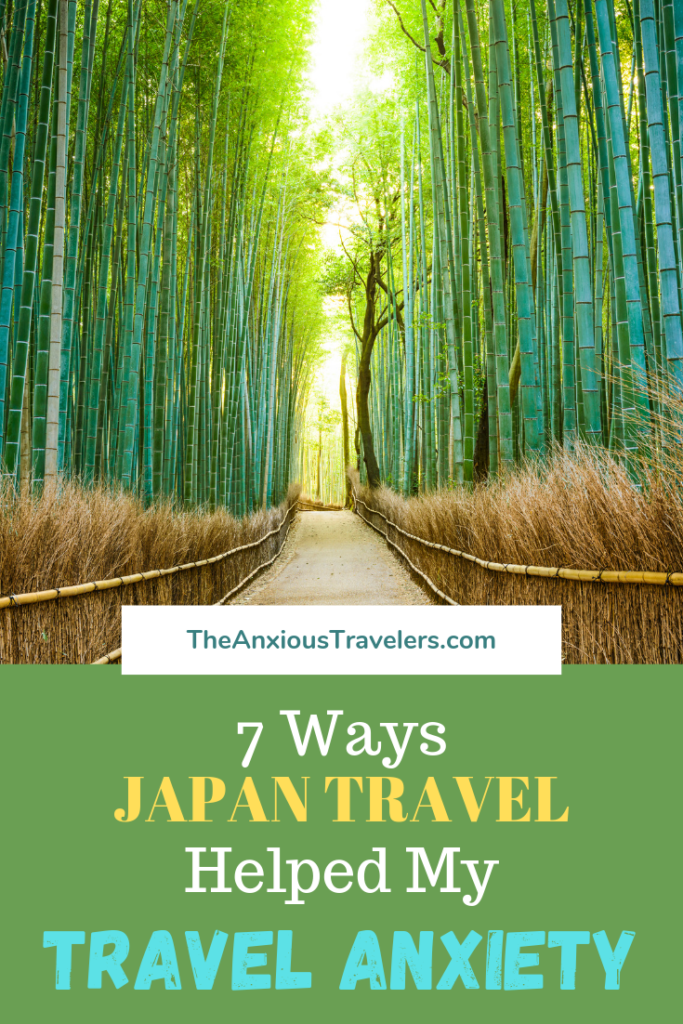 This was a great blog to read, Thanks for sharing such amazing content. Keep up the good work. Cheers!!!

Thanks for the comment! I’m glad you liked it!