For a long time, Top Thrill Dragster at Cedar Point seemed beyond my reach. I used to watch videos with my oldest son and wonder why anyone would get on such a thing! Then, when I started using thrill rides as therapy for anxiety and grief, it quickly rose to the top of my bucket list. I found myself Googling “how scary is Top Thrill Dragster?” for months. If you feel the same, this is for you!

There are bleacher seats so people can watch the “drag race,” there are checkered flags and racing lights. It’s just so much more immersive and clear that Cedar Point really put a lot of love and effort into designing the ride. But, enough about how it looks — what does it feel like to ride it?

How Scary Is Top Thrill Dragster?

Let’s look at a few specs about Top Thrill Dragster before we dive into the experience.  If you’ve read my post about how to overcome fear on roller coasters, you’ll know that one of my main recommendations is to learn everything you can about a ride before you get on. Some people see it as a spoiler, but if you’re feeling anxious, knowing what to expect can help calm your nerves. After all, anxiety tends to be about the perceived lack of control in a situation. Knowledge is power!

Here are some details about Top Thrill Dragster that you should know before climbing aboard:

If you’re feeling a little intimidated after reading that, don’t worry. You’re not alone. For years, I thought I got hung up on the 420 feet part. We’d see videos and I’d say, “Why would anyone ever do that willingly? Who would get on that ride?” Deep down, though, I wished I could.

After learning so much about Top Thrill Dragster, reading other people’s comments and watching POV videos, nothing about it shocked me when I finally saw it in real life. I knew people said it looked insane from the queue area, so I was expecting to feel that way too. By being informed, I took all the power away from my fear and empowered myself.

Top Thrill Dragster is a launch coaster, which means that it goes from being completely still to reaching top speeds in a matter of seconds. Top Thrill Dragster’s maximum speed is 120mph. That’s already a blistering pace for any roller coaster. Even more impressive, though, is that it reaches that speed in only 3.8 seconds. You might be wondering, of course, what that feels like. 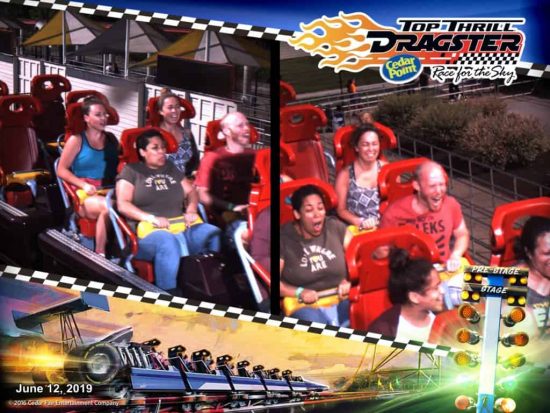 With that being said, you probably will be disoriented for a few seconds. The launch happens so quickly that you may not even realize you’re already moving until you’re about to climb the 400’ tower. That’s happened to us on Top Thrill Dragster and on a similar ride, Do-dodonpa at Fuji-Q Highland. You might feel like the wind was knocked out of you, but you’ll probably recover within a couple seconds. Don’t worry, you’ll have plenty of time to start screaming before the ride is over 🙂

Unlike Kingda Ka, Top Thrill Dragster has a restraint system that is remarkably minimal. That’s right, folks. You’ll just have a lap bar on this enormous strata coaster. When I realized that this was all that would be keeping me in my seat, my heart rate shot up a little. I won’t even try to lie.  At the same time, though, feeling like you’ve been stapled into your seat isn’t always pleasant either. So how does it feel? 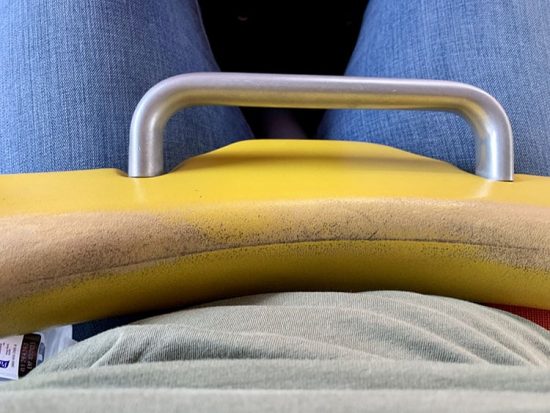 The actual car on Top Thrill Dragster is remarkably small, so you’ll definitely feel the rush of exposure on this roller coaster. It’s okay, though. You won’t feel unsafe! Despite using such small restraints, Cedar Point and Intamin do a great job of making you feel secure! You’re moving so fast that you don’t flop around either. I’m so glad I finally worked up the nerve to ride it!

Top Thrill Dragster’s defining feature is that giant 420-foot “lump” in the middle of the ride. You’ll hear many refer to this as a “top hat.” Once you launch, you’ll ascend into this element by hurtling up a 90-degree stretch, rotating slightly before cresting over the top, and then experiencing a 270-degree twist as you make your way back down. When I wondered how scary is Top Thrill Dragster, this was at the top of my list. So…how does that feel? 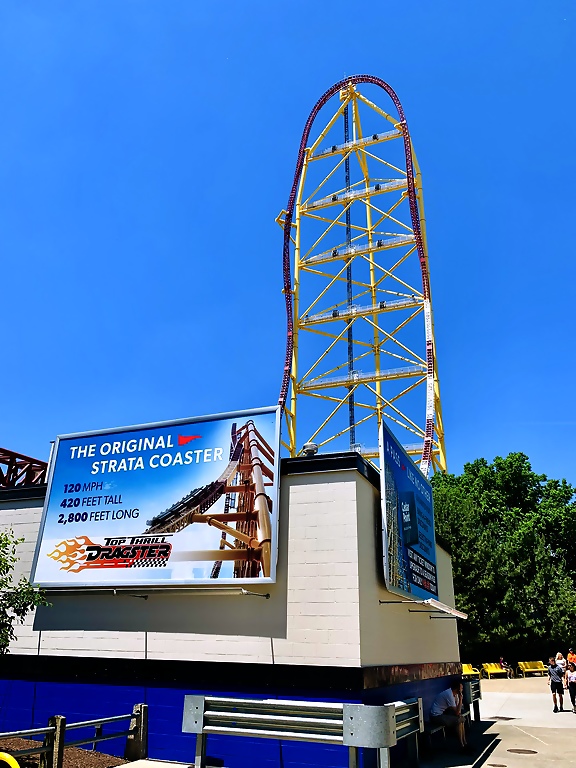 Honestly, this part was so much fun. We were literally filled with such awe talking about it later. Due to the ingenious design, you don’t feel like you’re flat on your back, even though you’re sitting at 90 degrees. This is one of the complaints I have about Hollywood Rip Ride Rockit at Universal Studios Florida, Takabisha at Fuji-Q Highland, and even Wicked at Lagoon.

Because you’re moving so quickly, along with the timing of the slight rotation in the climb, it’s exhilarating rather than scary. You WILL slow down dramatically just before reaching the top. In fact, cresting over the top hat feels like you’re suddenly moving in slow motion (take a second to enjoy that amazing view of Canada!).

You probably will not feel a pit in your stomach on the descent. This is not a normal roller coaster drop, so put that part out of your mind. Josh suffers from intense motion sickness and was completely fine. The twist really disperses the energy so it serves as a distraction and minimizes the impact on your body. Like I said — genius. Every second of it was thrilling!

After waiting so long to ride it, Top Thrill Dragster did not disappoint. It was everything that I could have ever hoped for, and my love for it is a little unexpected. After all, it terrified me so much that I’d only hoped to survive it. In the end, I fell in love with this roller coaster. As soon as we had a moment to collect ourselves, we ran to get back in line.

We were completely blown away by the theming, the smoothness of the ride, and the exhilaration. Here are some of the best things about Top Thrill Dragster:

Is Top Thrill Dragster scary? Absolutely — but only from the ride queue. You will probably feel some nerves while you’re waiting to launch, too. Lasting just 17 seconds, however, once you start it’s over so quickly that you don’t really have time to be scared! By the end, all you’ll feel is pride and amazement.

If you’re looking to get on an intimidating ride, this is a great one. While we do recommend working your way up to Top Thrill Dragster, if you tackle this and love it, it will be a game-changer if you’re trying to overcome fear on roller coasters. It’s over in the blink of an eye and everything will feel easy after conquering Top Thrill Dragster. We couldn’t recommend it more!

Where to Stay at Cedar Point

If you’re visiting from out of town and want to stay nearby, the Cedar Point Express Hotel is the way to go! It’s less than a five minute drive from the gates, it’s well-maintained (recently renovated), reasonably priced, and you get an extra hour at the park. If you end up driving into Columbus, check out Mikey’s Late Night Slice. If you head to Cleveland, be sure to try Skyline Chili!