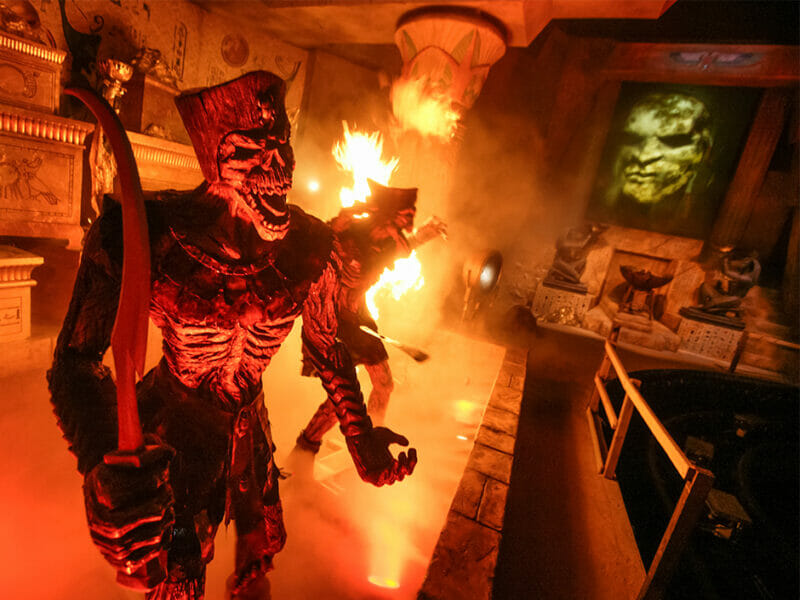 Thinking about riding Revenge of the Mummy but feeling unsure? We’ve got you covered. This post will provide you with the details you need to make an informed decision before you get in line. We’ve been on this ride at two different Universal parks and we’ve got the answers to the question: “how scary is Revenge of the Mummy?”

We’ll discuss where the ride is located, specific details and facts, elements that some guests might find scary, and more. I’ll say right now, though, that younger children might find Revenge of the Mummy a bit overwhelming, so be sure to review this post with them before hopping on board!

Revenge of The Mummy at Universal Studios

If you’re a fan of the movies, you’ll probably enjoy the theming in the Revenge of the Mummy. Universal definitely spared no expenses! While the ride is aging, it still looks pretty good. If you can get over your fears, you’ll probably have a fun time!

Is Revenge of The Mummy a Roller Coaster?

Yes, Revenge of the Mummy is a roller coaster. It’s also a dark ride. Here’s a funny story. So, I’d been on this ride years ago in Orlando and remembered having fun, but that’s about it. For some reason, I likened it to Harry Potter and the Escape From Gringotts, which is more of a tame story coaster.

When my teen daughter and I went to the park in California, she asked if it was intense. Again, I compared it to Gringotts, so we hopped on expecting a light thrill. Revenge of the Mummy is a launch coaster so we got the surprise of our lives. Fortunately, other people on the ride were just as shocked and we all had a good laugh together on the loading platform!

Here are some quick facts about Revenge of The Mummy:

There is a preshow on Revenge of the Mummy. You’ll enter the building’s corridor and weave through several hallways to get to the ride. You’ll see artifacts like the Book of the Dead and other things you’d imagine from the movies. Everything has an Egyptian theme including hieroglyphics on the walls!

The coaster seats look like mine carts. This is an archeological site, after all! You’ll be secured with simple lap bars.

Is Revenge of The Mummy Scary?

It’s entirely possible to be scared or creeped out by the queue area for Revenge of the Mummy, especially in Orlando and Singapore where the ride is a bit more elaborate. Just imagine being surrounded by mummies and scarab beetles. If you’re okay with that, you’ll be fine in line.

Revenge of the Mummy is a launch coaster. Depending on the location, it suddenly accelerates from 0 – 40 mph or 0 – 45 mph in a matter of seconds.

There’s a lot of dark corners in the queue and on the ride. In fact, you will launch directly into darkness at the beginning. If you don’t love the dark (I don’t!), then be prepared or skip this ride. I’ve ridden it twice, and that’s enough for me!

There are high-speed bank turns, spooky sound effects, and holographic characters. Plus, you’re inside a tomb at one point and other things like that. Just picture yourself inside one of the Mummy movies and decide if you’d be cool with it.

My friends, the least enjoyable thing for me on the Hollywood version was having water drop on my face. It was supposed to be “blood,” and it felt thick and viscous. I don’t want foreign water from a stagnant ride on my face, as I try to avoid germs at theme parks, so that was not my favorite.

The drop on Revenge of the Mummy is 39 feet. It’s really not that bad at all. You barely feel it and it lasts one second. Still, if you really hate drops, you might not like this.

The launch on this coaster happens pretty suddenly and if you’re not prepared, it can feel very fast. Combined with the other elements on this ride, it does feel like it’s moving faster than 40 or 45 mph.

Best Things About Revenge of The Mummy at Universal Studios

If you can get past your fear, Revenge of the Mummy is a thrilling ride! The theming is really impressive, even years after it first opened. They did a good job of recreating the feel from the movies, and you’ll walk away feeling like you had a fully immersive experience. We have no regrets about riding it, and if it’s hot or rainy, this indoor ride will help you escape the weather!