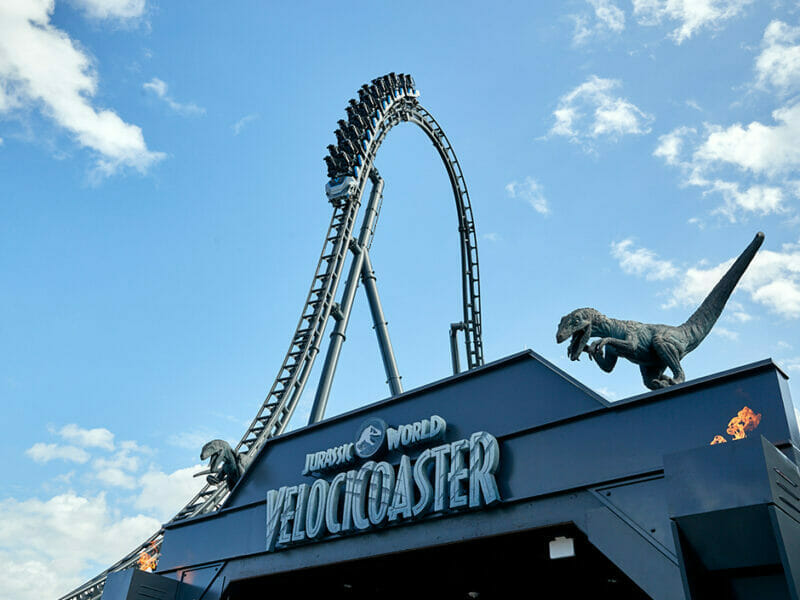 One of the most exciting and highly-anticipated roller coasters right now is VelociCoaster at Universal’s Islands of Adventure. We’re big fans of Intamin rides, so it’s very cool that they’ve manufactured this sleek new attraction. If you find yourself at the park wondering “how scary is VelociCoaster?” we’ve got you covered! We’ll go over the details to help you decide whether to get in line or walk away.

VelociCoaster at Universal’s Islands of Adventure

Want to get on the new Jurassic World-themed ride? You’ll need to head to Universal’s Islands of Adventure to queue up for VelociCoaster. This park is located at Universal Orlando Resort and is separate from Universal Studios Florida. To gain admission, you’ll need a ticket that either gives you access to both parks or one ticket specifically for Islands of Adventure.

From there, you will need to head to the Jurassic Park area which, along with Wizarding World of Harry Potter, occupies the very back of the park. If you’ve been to Islands of Adventure before, VelociCoaster is where Triceratops Encounter used to be. It’s a bit of a trek and sometimes the grounds can be wet and slick, so be careful if you’re in a hurry. We have almost wiped out more than once!

Is VelociCoaster a Roller Coaster?

As the name suggests, VelociCoaster is a roller coaster. In fact, this is a pretty intense ride. So if you’re googling “how scary is VelociCoaster?” your question is justified! It should not be confused with Jurassic Park: The Ride, which is a much calmer, older (opened in 1996) attraction. VelociCoaster joins the Incredible Hulk Coaster as the most extreme rides at Islands of Adventure (and Hollywood Rip Ride Rockit if you include Universal Studios Florida). VelociCoaster does not let up!

Here are some quick facts about VelociCoaster:

Guests will begin their VelociCoaster journey just outside the lower level of the Discovery Center. As you move through the queue area, you’ll see statues of Blue, Echo, Delta, and Charlie, the famous velociraptors from Jurassic World. You might even see Claire Dearing and Owen Grady!

I don’t want to spoil too much of what you’ll see, but Universal really does a great job of using visual displays and screens to create an immersive experience. This queue area is a prime example of that!

The loading area for VelociCoaster isn’t anything unusual. We’re thrilled that there are no conveyor belts like the ones you’ll find on Hagrid’s Magical Creatures Motorbike Adventure, Hollywood Rip Ride Rockit, or Harry Potter and the Forbidden Journey. Instead, this one looks a lot like Incredible Hulk — platforms for loading and unloading on either side of the train.

The trains themselves are pretty cool. There’s a bright blue light on the front as well as smaller ones on the headrests. You’ll also have your own speaker blasting the soundtrack into your ears (trust us — this is AWESOME!). In terms of restraints, you’ll just have a lap bar. There are no over-the-shoulder harnesses on this, so if that makes you nervous, skip this!

Let’s take a look at some of the elements of this roller coaster that riders might find intense or even scary.

The queue for VelociCoaster is not very scary if you’re a fan of Jurassic World movies.

VelociCoaster is a launch coaster and there are two launches. The first will take you from 0 to 50 mph in two seconds. The second launch goes from 40 to 70 mph in 2.4 seconds. How does a launch feel? It depends on the ride.

On Top Thrill Dragster at Cedar Point, it felt like being pushed very fast from behind. On Dododon-pa at Fuji-Q Highland, it felt like being suddenly pulled forward. No matter what the sensation, the main thing is that the movement happens very, very quickly. If you prefer rides that gradually build up to a drop, VelociCoaster may not be for you.

When you go upside down on a ride, this is called an inversion. The inversions on VelociCoaster are wild for several reasons. First, it can feel like you’ve been suspended forever. The design does not rush through those inversions — it hangs onto them. Second, the inverted elements are intense.

If you’re wondering how scary is VelociCoaster and you do not like inversions, you may want to rethink getting on VelociCoaster. Don’t get me wrong, these elements are thrilling, but it’s no fun if they make you feel genuinely terrified.

There’s a large body of water in the middle of Islands of Adventure (hence the name!) and VelociCoaster is near it. In fact, some of the track goes right over the water (with riders upside down, at times!).

Much like on the Incredible Hulk Coaster, there is some mist on VelociCoaster, most notably at the first launch. If you don’t like how mist impacts visibility or the feeling of mist on your face, you’ll need to decide if overcoming that discomfort is worth getting on this ride.

VelociCoaster reaches a maximum speed of 70 mph which is fairly fast for this type of ride. With two launches, you will maintain and actually gain speed on this roller coaster. Due to the nature of the design (like the Hagrid ride), you might find that VelociCoaster feels faster than other rides with similar speeds.

As mentioned, there are no shoulder harnesses on VelociCoaster. While the lap bar is well-designed and feels quite secure, people who prefer an over-the-shoulder restraint might feel nervous on this attraction.

There are a lot of things to love about VelociCoaster. The first and most obvious thing is that this is a fun ride for people who love Jurassic World. You’ll see Claire and Owen, and the overgrowth along the track will make it feel like a velociraptor (or fleeing from one)!

If you’re a fan of launch coasters, you will appreciate this smooth ride. It’s fast, zippy, and doesn’t let up. Much like Hulk, this is a cool ride at night. The blue lights on the front of the train and headrests look so amazing, especially when you soar over the water. It’s quite an experience!