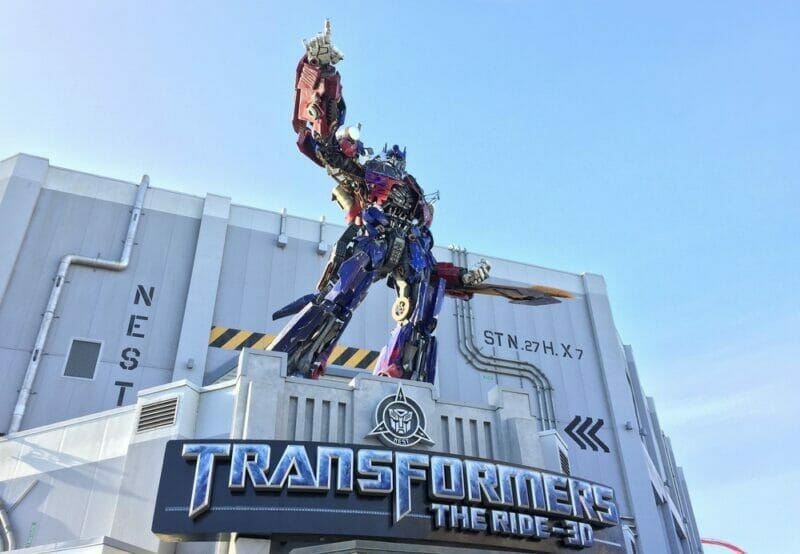 As a child of the 1980s, I love Transformers. As a lifelong fan of the cartoon and the first live action flick in 2007 (I haven’t liked any of the others), I was really excited to get on this attraction. The lot is really big and loud, though, so if you find yourself searching “how scary is Transformers: The Ride 3-D,” I totally understand.

To help you decide whether you can handle the ride, we’ll discuss some specifics. We’ve found that gathering as much information as possible really helps overcome fear on roller coasters and thrill rides. So, let’s get down to it!

We’ve been on it at both U.S. parks, so we’ll base our experiences on those versions of this ride, but it should be similar anywhere in the world.

Is Transformers: The Ride 3-D a Roller Coaster?

No, Transformers: The Ride is not a roller coaster. There are times, however, when you will feel like you’re ascending and dropping like you’re on a roller coaster, though. Instead, this is a motion platform-mounted dark ride that follows a 2,000-foot-long (610 m) track.

The characters from Transformers (mostly the Autobots and the Decepticons) are shown in 3D on giant 60-feet (18m) high projection screens.

Here are some quick facts about Transformers: The Ride 3-D:

The queue for Transformers: The Ride 3-D is pretty cool, but it can be overwhelming if you’re nervous. It’s loud and the workers are dressed in military fatigues. Depending on the location, you’ll see video screens playing briefings from Ironhide, Ratchet, Wheelie, and General Morshower. You learn that the Decepticons are on Earth to search for the Allspark before being given a pair of 3D glasses (we definitely wipe these down to avoid germs) and loaded into the ride vehicle.

The loading area for Transformers: The Ride 3-D is pretty standard. The restraints consist of a single lap bar, and there’s an overhead door (like a Delorean) that comes opens and closes to let riders get on and off.

Is Transformers: The Ride 3-D Scary?

While it could be argued that Transformers: The Ride is intense in some ways, it’s not really scary. At least not in the traditional sense. There’s not much in the way of jump scares and nothing beyond what you’d expect from the Transformers universe happens. Let’s look at some elements that could be stressful for some riders.

As mentioned, the queue area is loud and a bit overwhelming. When my younger daughter was 8 years old, we went on the ride and she was initially really nervous just from the queue. She said the military uniforms looked real and she could hear shooting (from inside of the ride). So, keep that in mind for those who may be sensitive.

I’m not a fan of the dark, so there are parts of this ride that I find a bit unnerving. The darkness never lasts for long, but it’s enough to stress me out a bit. I find sitting in the front or middle row helps.

There is a moment when water sprays in your face. I hate it. I really hate it. If you don’t like the feeling of foreign water misting your face, take cover (or skip this ride).

The blur effect on this ride has worsened over the years and it makes me feel sooooo sick. When I first rode this back in 2013, it was new and awesome. It’s not so awesome anymore. I know Universal are working on their 3D rides, so let’s hope this gets a lot better soon. In the meantime, check out our tips for preventing motion sickness on rides!

It’s so much fun to see Optimus Prime and be immersed in a battle between the Autobots and the Decepticons. The technology and effects were cool when it first opened, so if you rode it back then, you know how great this was. Aside from that, this is basically just another good indoor ride to beat the heat.