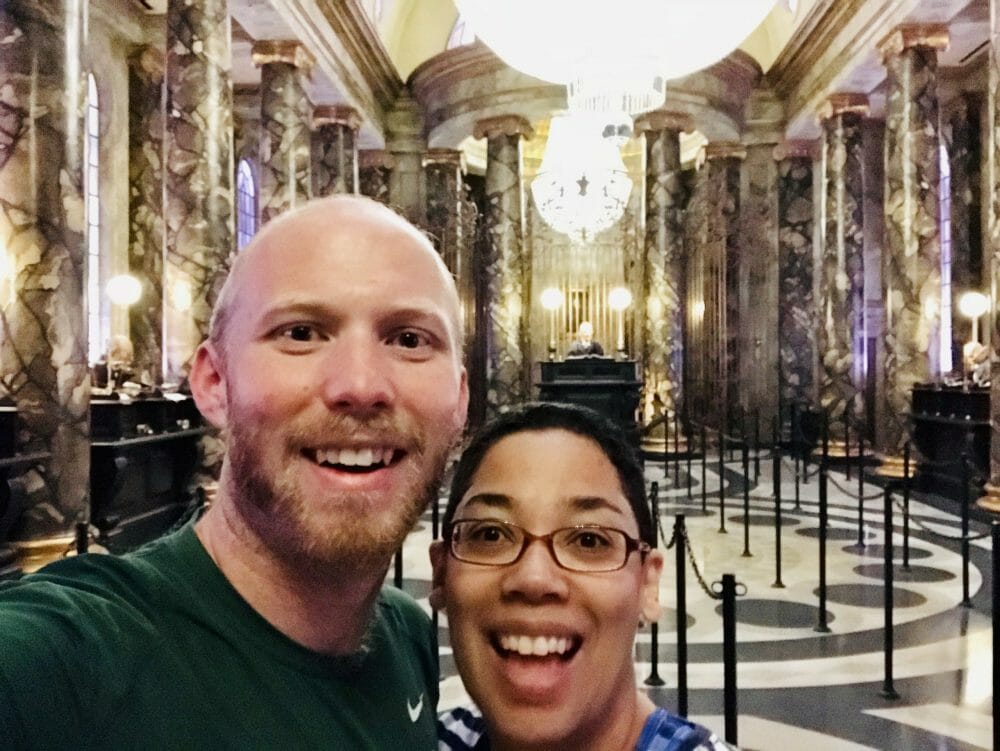 Checking out the Wizarding World of Harry Potter at Universal Orlando Resort? It’s one of our favorite places in the world. So magical! If you’re thinking about getting on some rides, you might be thinking to yourself, “How scary is Harry Potter and the Escape From Gringotts?”

There’s a lot of information out there, but as people with travel anxiety, we’ve got our own opinions. Plus, we have six kids, so we’re hoping our tips work for guests of all ages.

Harry Potter and the Escape From Gringotts Ride

Where is the Harry Potter and the Escape From Gringotts ride? While there are several Universal Parks around the world, you’ll only find this attraction in one place — Universal Orlando Resort!

To go, you’ll need to buy a ticket to enter Universal Studios Florida. Universal’s Islands of Adventure is a different park, but we highly recommend visiting both (you can ride the Hogwarts Express to commute between them with a Park-to-Park ticket!).

Once you’re in Universal Studios Florida, you’ll need to head to Diagon Alley. It’s hidden behind a wall (just like in Harry Potter’s magical world!), so you might have to poke around to find one of the two entrances. Just look for the Knight Bus or phone booth, and you’ll be golden! 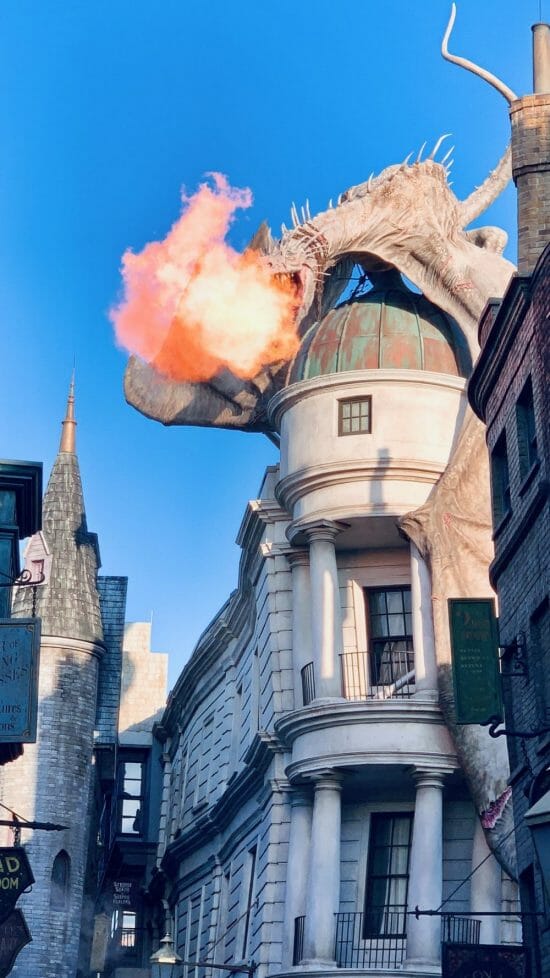 Once inside Diagon Alley, you’ll want to find Gringotts Bank, which is towards the back. The giant dragon perched on top might help you find it!

Here are some quick facts about the Harry Potter and the Escape From Gringotts ride:

Is Harry Potter and the Escape From Gringotts a Roller Coaster?

Yes, but not in the traditional sense. The fully indoor steel coaster is similar to a dark ride and sometimes stops or moves slowly through sets and sequences. You will also need to wear 3D glasses for the full experience.

Riders will interact with animated and live-action scenes through motion-based 3D projection screens. If you’ve ever ridden Transformers: The Ride at Universal Studios Florida or The Amazing Adventures of Spider-Man at Islands of Adventure, the experience is similar.

Related posts — How Scary Is:

The queue area will give you a good idea of whether you’ll think Harry Potter and the Escape From Gringotts is scary. We went for the opening, and my younger daughter was 11 years old at the time. She found the queue so scary after a certain point that she backed out. Once we rode it and reassured her, we got back in line and she absolutely loved it!

The wait for the ride can be outrageous, so the line extends well outside of the building. Once you’re inside, you will be in complete awe of how well they replicated Gringotts Bank. It’s beautiful! Once you pass through the lobby, though, things get a little more dicey.

Gringotts is a goblin bank, so the queue area gets dark both figuratively and literally. After passing through the lobby, you’ll step into an elevator to head to the loading platform. The elevator ride itself is spooky, and while I feel like they’ve made it less scary over the years, as recently as 2019 our three year old had a few jumps.

Things to keep in mind:

Riders will sit four across on a bench. The lap restraints lower down and rest on the tops of your legs. It’s comfortable and feels secure enough. You’ll also be wearing 3D goggles. 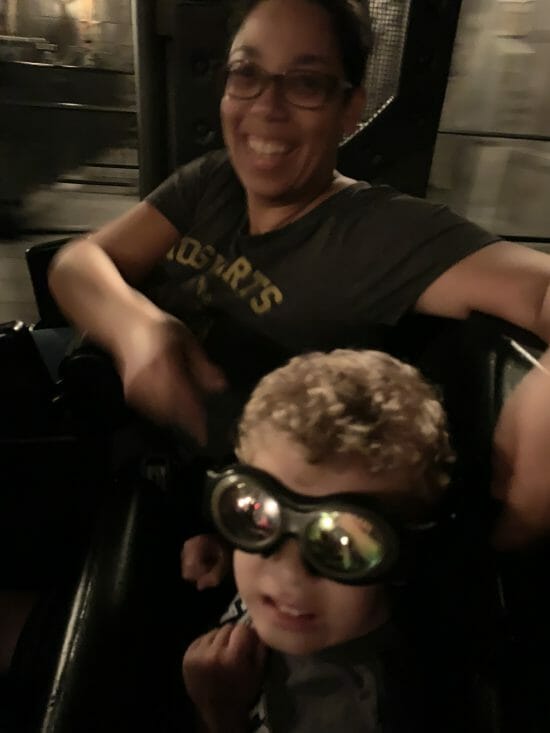 What is Scary About Harry Potter and The Escape From Gringotts?

We’re a large family and we all have different triggers. That being said, we all enjoyed Harry Potter and the Escape From Gringotts. Nevertheless, there are some things that might be scary:

If you enjoyed Harry Potter and the Deathly Hallows: Part 2 without feeling scared, this ride should be a lot of fun!

Best Things About Harry Potter and the Escape From Gringotts

There are so many things to love about Harry Potter and the Escape From Gringotts. It’s a truly immersive experience for Harry Potter fans, and we loved seeing Bellatrix and Voldemort “in the flesh!” We are sad that there’s no picture on this attraction, but the music and experience are definitely worth it! 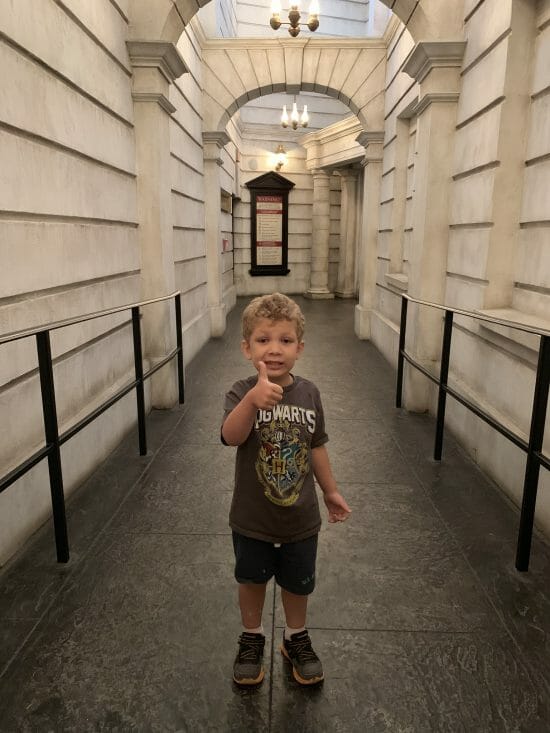