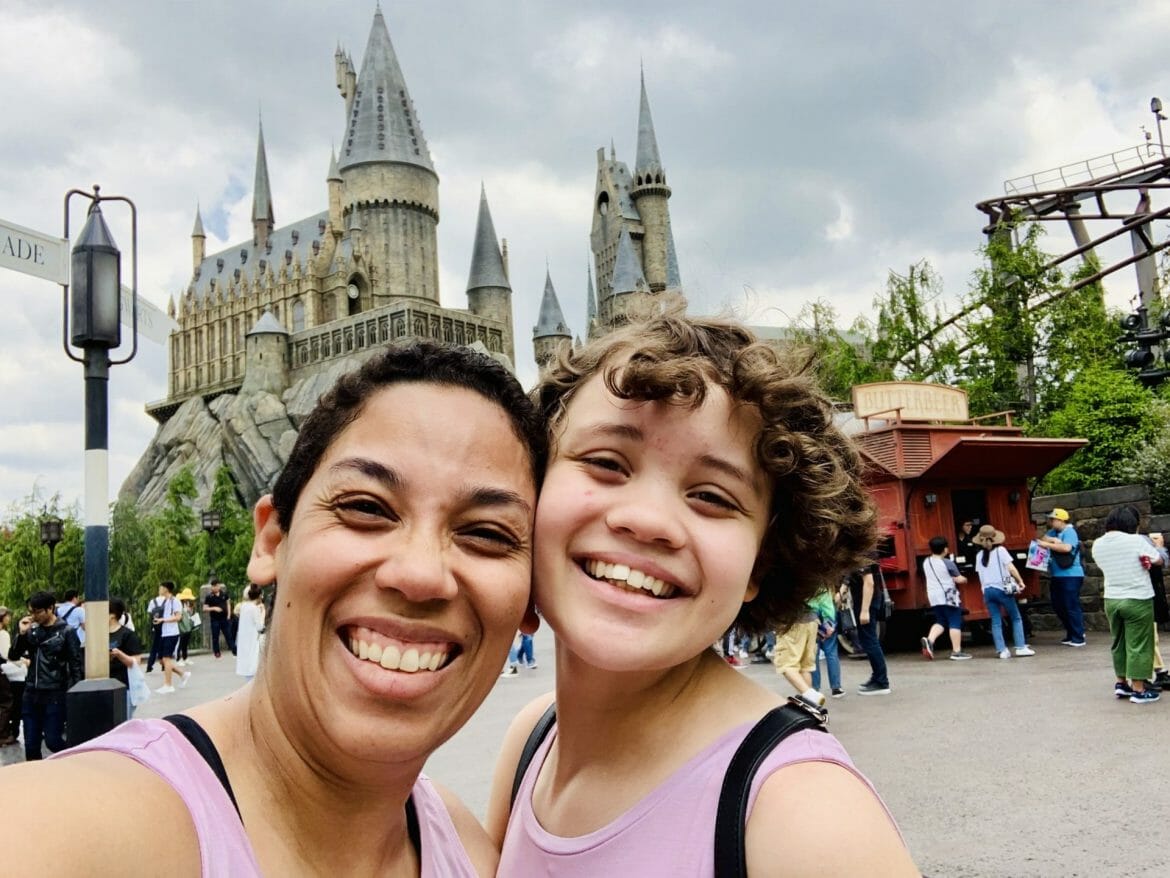 If it’s your first time at the park, please note that the Wizarding World of Harry Potter is in the Upper Lot. If that’s all you care about, then you won’t even have to venture anywhere else! While you’re in Los Angeles, though, we highly recommend checking out everything Universal Studios Hollywood has to offer!

No Diagon Alley in Hollywood

Harry Potter fans will probably be sad and disappointed to learn that there is no Diagon Alley at Universal Studios Hollywood. You’d have to travel to Universal Studios Florida to enjoy this attraction. It’s definitely worth visiting someday if you can swing it, though.

Overall, the Orlando park has a lot to offer. Goals, right? The good news is that you’ll still have a spectacular time in Southern California!

Flight of the Hippogriff

One of the two Harry Potter rides at Universal Hollywood is Flight of the Hippogriff. It’s a small roller coaster suitable for small kids and Harry Potter fans of all ages! The wait time for this really depends on when you go. I’ll be honest, that I’ve ridden this at three Universal parks and never waited more than 10 minutes. Keep an eye on the app, get there early, and plan ahead!

There are a couple of really sweet things about this ride. The first is that you’ll get to see the outside Hagrid’s Hut if you get on this ride. The second is that on the lift hill, you’ll have a great view of Hogwarts School of Witchcraft and Wizardry!

We absolutely love the queue for this attraction, which is a good thing because the wait time can be brutal. Definitely plan for that! It’s cool going through the castle, though, seeing the Defense Against the Dark Arts Classroom, Dumbledore’s office, the Gryffindor Common Room, and so much more. It’s a little bit creepy, though, so you might feel as nervous as a student competing in the Triwizard Tournament!

The ride vehicle on this dark ride is legit. It twists and turns, giving riders a truly immersive experience (watch out for the Whomping Willow!) and maybe a little motion sickness. It definitely made me feel like I was living in one of my favorite movies! Be sure to read our guide to How Scary is Harry Potter and the Forbidden Journey for more details.

Walking through the village of Hogsmeade, you know our first stop (after the rides) is to grab some Butterbeer! Along with the gift shop, it’s definitely one of the best things about a trip to the Wizarding World of Harry Potter.

We’ve created a guide for Where to Eat at the Wizarding World of Harry Potter. Check it out, be sure to note which places are only at Universal Orlando.

When you’re ready to explore the rest of Universal Studios Hollywood, you’ll find many amazing attractions to explore (especially in the lower lot). But first — head to Lard Lad Donuts, if your diet allows! That giant donut is delicious and so famous (inspired by one of the most popular television shows of all time, The Simpsons).

Here are some of the rides and attractions you can check out:

If you get the chance to visit a Universal theme park in September or October, try to check out Halloween Horror Nights. It’s one of the best special events at Universal Hollywood, for sure. We strongly recommend the R.I.P. Package so you can skip the lines while you eat and drink your way through the night. So worth it!

You may have heard that the Wizarding World is usually closed during Halloween Horror Nights. This year, though, it seems that Harry Potter and the Forbidden Journey and Flight of the Hippogriff are open! Don’t quote me on this, but keep your fingers crossed!

It’s hard to name just one fun thing about visiting the Wizarding World of Harry Potter. Even though Universal Studios Hollywood doesn’t have many rides, it’s still an amazing, immersive experience.

If you want to get on the Hogwarts Express, ride Harry Potter and the Escape from Gringotts and stroll through Diagon Alley, though, your best bet is to head to Universal Orlando Resort (if you’re into extreme thrill rides, be sure to hop on the Incredible Hulk Coaster and Velocicoaster!).

Whether you’re in Florida or on the west coast, there’s nothing like Universal Parks. Yes, we like Disney World too, but how can you compete with Harry Potter?! We hope this short guide helps you have a great time on your next trip!

How to Do Universal Studios Hollywood in One...