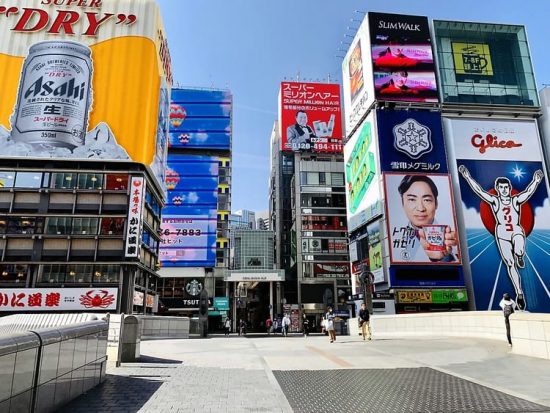 If you plan to visit Osaka, you can’t skip Dotonbori! Yes, it’s a bit of a tourist trap, but it’s worth it. There’s so much going on that it can be a bit overwhelming. Between the huge crowds, the shops, restaurants and bright lights, you may not even know where to begin. That’s why we’ve put together this list of must-do things to do in Dotonbori before leaving Japan.

While we were there, we really enjoyed checking walking along the canal from Dotonbori Bridge to Nipponbashi Bridge in Namba. Of course, we had to do a little shopping and eating along the way. Really, don’t miss your opportunity to visit Dotonbori if you’re ever in the Osaka area.

How to Get to Dotonbori

Before we get into the nitty gritty, let’s talk about how to get to Dotonbori. We strongly recommend using a Japan Rail Pass to get around. Your life will be so much easier if you don’t have to worry about paying for individual train tickets (and you’ll probably save money!). 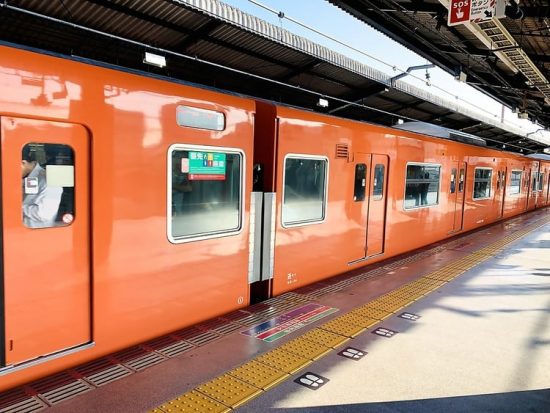 Related: JR Pass, Shinkansen and Hello Kitty – A Guide to Trains in Japan

Dotonbori is about a five minute walk from JR Namba Station on the Yamatoji Line in Osaka.

Truth bomb — we got lost. We got pretty lost and we got off at the wrong station. In all fairness, we’d landed just 15 hours earlier and we were completely out of it after an eventful flight. It was our first day using the Japan Rail system on our own (on my previous trip to Japan, someone was guiding me), and we made some mistakes. We’re pros now, though!

Travelers from North America will probably wake up at the crack of dawn due to the time difference. Instead of trying to go back to sleep, get up and explore Dotonbori first thing in the morning! Almost everything will be closed, but you’ll get to see so much more when you’re not dealing with the crowds. 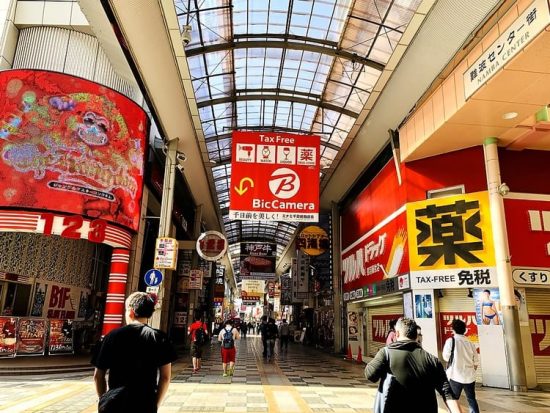 We went early, stopped at Starbucks, and then did all of the stereotypical touristy things (like taking a picture with the Glico man) without having to fight for a spot. Plus, it was just so peaceful and cool to watch everything slowly coming to life. This is seriously one of my favorite tips!

Best of all, we got ourselves oriented with the place while it was empty so that we knew where we were going when it got busy. We made note of all the shops and hot spots we wanted to check out later, and then it was so much easier to find what we were looking for despite the crowds!

Things get pretty hectic in Dotonbori from noon till just after dinnertime. Locals and tourists alike flock to the area and it gets crammed. When I’m shoulder to shoulder with strangers, my travel anxiety hits the roof. One way to keep things chill is to visit Dotonbori a little later in the evening. We went around 8pm, and while it was still busy, it wasn’t completely packed. 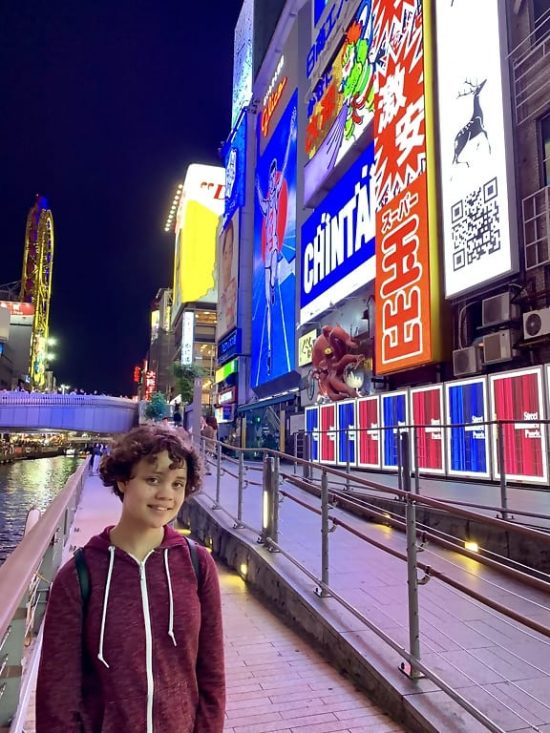 In the thinner crowds, we were easily able to make our way to the food stalls and even found seats at Yoshinoya for some curry. With full bellies, we discovered an alternative to fighting the crowds at street-level.  Instead, we made our way down to the canal walkway and were the only ones there! It was absolutely perfect.

As mentioned, we definitely took the opportunity to try the popular Japanese fast food restaurant Yoshinoya because it was almost empty. There are, of course, a million things to eat in Dotonbori. Most of it is unique, fresh, and delicious! Do not miss the chance to check out Gyozaoh! We tried two different types of gyoza and they were both heavenly. SO GOOD! 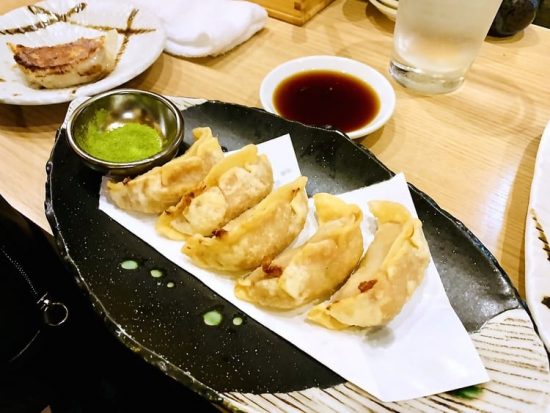 While you may not recognize everything, make an effort to try something new. I’m allergic to fish and seafood so I couldn’t eat the Takoyaki, but those little balls of dough stuffed with octopus smelled amazing! We even went into nearby Japanese convenience stores and tried everything in there (eating at 7-11, Lawson and Family Mart will save you tons of money!). Sampling all the foods is definitely one of my suggested things to do Dotonbori!

It doesn’t get much stranger than Don Quijote, but if you’re looking for snacks or souvenirs, it’s the place to go! You’ll find these iconic shops in Osaka and Tokyo. Everything is super cheap and the store is absolutely outrageous in the most hilarious and fun ways. Just browsing in there for 20 minutes left me and Hayley giddy! 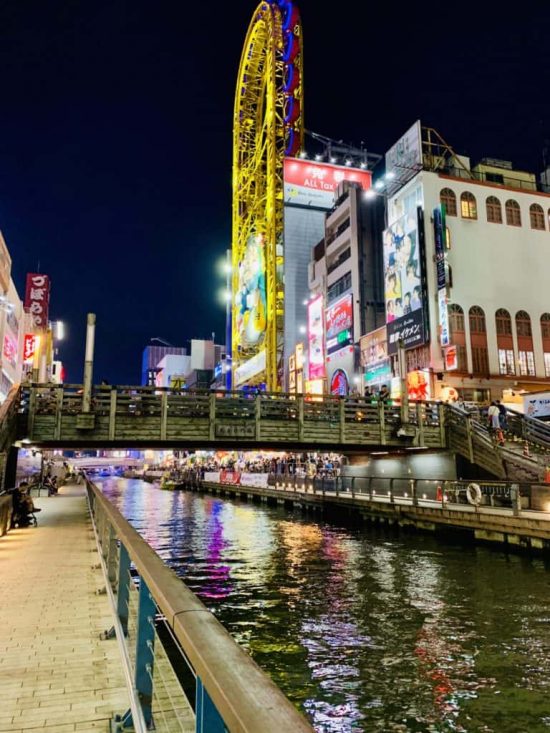 In Dotonbori, you can’t miss Don Quijote — there’s a giant, neon yellow Ferris wheel attached to it! Hayley wasn’t ready to hop in one of the capsules, but now that she’s overcome her fear of rides, this will be on our list when we return in 2020. If you don’t want to fight the crowds in the big location, you’ll find a small shop just across the street from the canal.

When you’re in the middle of the action in Dotonbori, it’s hard to see everything. In fact, depending on how busy it is, it might be impossible to see much at all. That’s why you should take your sightseeing to new heights (or depths, actually!).

The Tonbori River Cruise is a casual (but fun!), hop-on/hop-off tour that can be booked online through sites such as TripAdvisor.com. If boats aren’t your thing, you can skip the regular sidewalk and take the path along either side of the canal. It’s so much quieter!

It’s cheesy and the ultimate in tourist behavior, but you have to take your picture with the Glico Running Man! YOU HAVE TO! Okay, it’s not *technically* a requirement, but it’s a rite of passage. Did you even go to Dotonbori if you don’t have this shot on your camera roll? 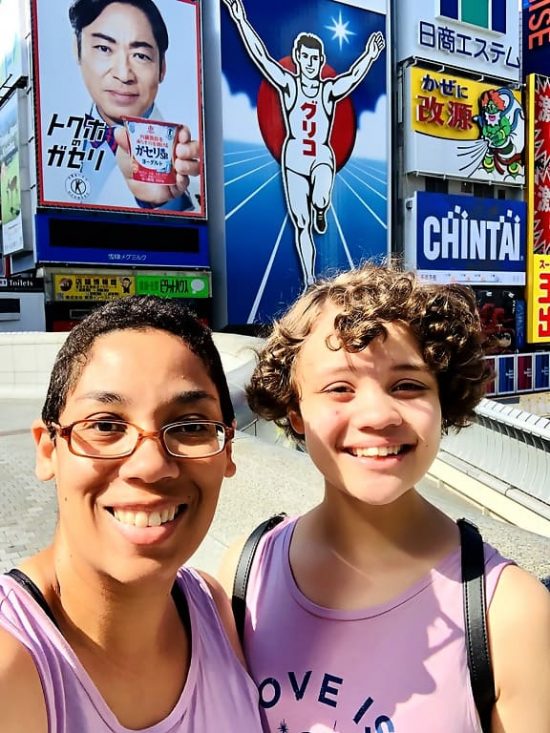 Where is the Glico running man sign in Dotonbori? It’s located above the Ebisubashi Bridge, which is the main hub of the area. Originally installed in 1935, the iconic billboard for a confectionery company is steeped in history! Over the years, the sign has undergone five updates to reflect current events (such as Japan winning the World Cup) and was previously crafted from neon lights. The newest version is made from LEDs! This rite of passage is always listed among the top tips for visiting Dotonbori!

If you spend any time in Osaka, you will likely see the face of Kuidaore Taro. The bespectacled drummer boy in a red in white striped clown suit and a hat is the Japanese city’s mascot and his image is on everything. We even came home with socks and treats adorned with his smiling (albeit slightly creepy) face! 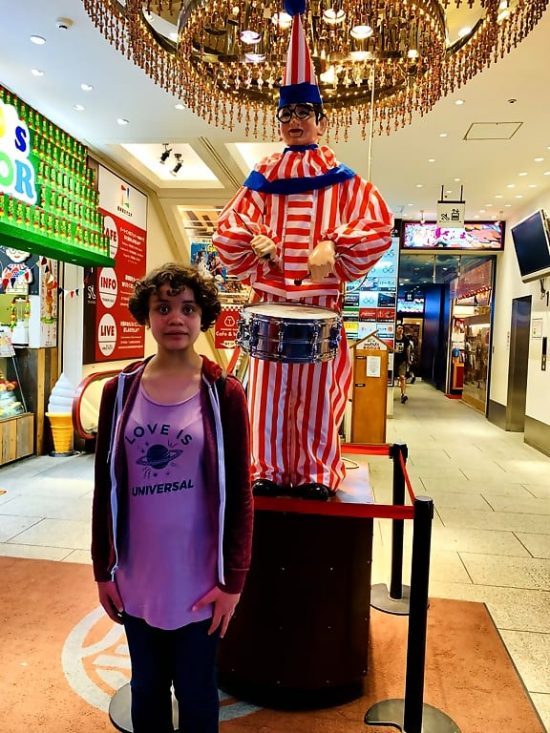 You’ll find him in the lobby of the Nakaza Cuidaore Building in Dotonbori, surrounded by locals and tourists taking pictures. He’ll be the one banging away on a drum, of course. Don’t miss the chance at this unique and silly photo op! We’ve got a number of pictures here, but how could I not share the one of Hayley looking slightly terrified?

Alright, that’s it for now. We’ll be adding more and updating this post after our next trip to Japan. Hayley and I will have Josh with us, so it will be cool to see the area through his eyes!

We absolutely loved Osaka, so if you’re seeking suggestions for things to do in Dotonbori, we hope this post made planning your trip a little easier. Have a great time and eat some gyoza for us!