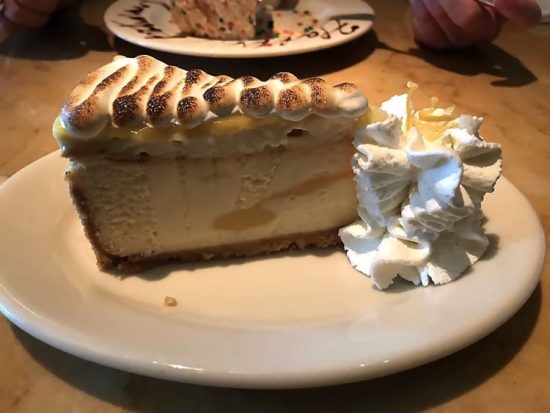 When Josh’s birthday rolled around, we wanted to try something a little different. It’s not that we haven’t ever been to the Cheesecake Factory, but it had been years. With a newfound appreciation for cheesecake, however, Josh was keen to find out if this restaurant could live up to its reputation for making the best.

If you’ve ever been to the Cheesecake Factory, you’ll know that the menu is huge. There are pages and pages of dishes with some being added (or removed) all the time. While we devoured the free bread (the brown bread is my absolute favorite and I love that they sell it in grocery stores now!), we made our selections.

For our appetizers, we were feeling a little greedy and ordered both the Chicken Potstickers (mostly for me) and the Loaded Baked Potato Tots (mostly for Josh). We enjoyed each of them well enough and were looking forward to our entrées.

Despite my allergies, Josh ordered the Fish & Chips. I teased him that he wouldn’t be getting any kisses on his birthday, but I was happy he had chosen a dish that he normally skips (but really loves) out of concern for me (unlike seafood, my reaction to fish is relatively mild). Overall, he said it was okay, but he wouldn’t go through the trouble of ordering it again.

Meanwhile, I chose the Teriyaki Chicken. I’m a huge fan of teriyaki and, while I won’t compare it to the stuff I’ve had in Japan, I must admit that I thought this dish was terrible.

Even the rice was overcooked and so mushy that I could barely enjoy it. We were optimistic that a great dessert could turn things around.

Having spent the entire meal dreaming about the Key Lime Cheesecake, I was absolutely crushed to learn that they had sold out. After some pouting, I went with the Lemon Meringue Cheesecake and it was really good. It was tough because, even though I enjoyed it, I was still disappointed about suffering through that awful Teriyaki Chicken and not being able to get what I really wanted for dessert.

Fortunately, Josh was happy enough for both of us and, because it was his birthday, that was good enough for me. He ordered the Celebration Cheesecake, which consists of layers of vanilla cake, cheesecake, strawberry, chocolate, and vanilla mousse with cream cheese frosting.

When they put that massive slice down in front of him, he threw his head back and gave out a little roar. For a man who had never tried cheesecake just a year earlier, he sure was excited!

There was no way he was going to finish it in one sitting, but he gave it his best, most enthusiastic shot. In fact, when I snapped a photo, I discovered that he’d somehow gotten some of the topping on his watch! We had a really good laugh about that.

Overall, we probably wouldn’t go back the Cheesecake Factory for a meal, but we’ll definitely continue ordering desserts to go. We’ve done this for several birthdays and it always works out well. Yummy!