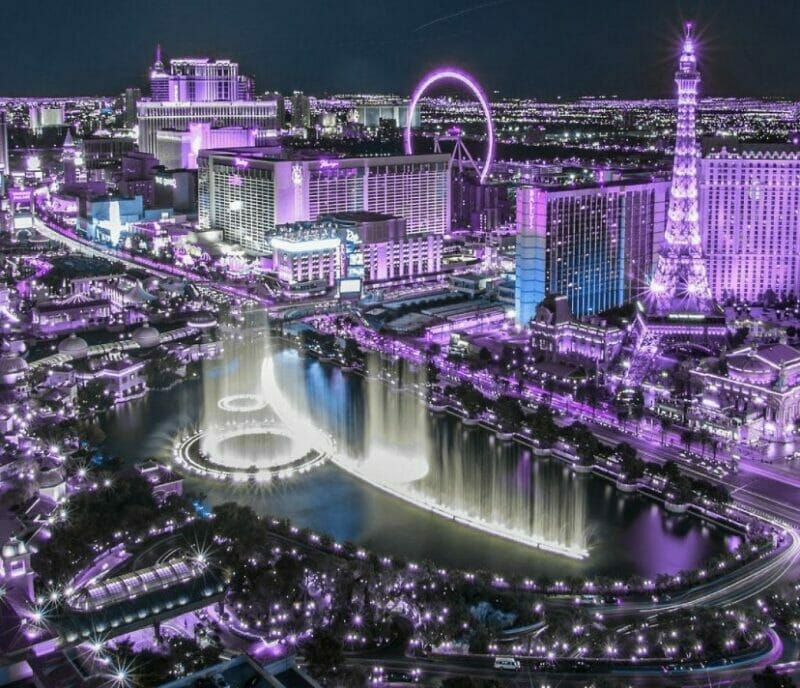 Oh my goodness! If you’re going to Permission to Dance On Stage — Las Vegas you’re in for quite the experience (here’s what to pack)! We already saw how Los Angeles rolled out the purple carpet for ARMY. It was very cool, but the City of Las Vegas is taking that to another level. With BTS-themed hotel rooms, BTS drinks, and more, they are creating a whole carnival for BTS in Las Vegas. The Las Vegas Strip will be turning purple for BTS!!!

On Instagram, Big Hit dropped a major bomb and ARMY is officially freaking out. This partnership with the City of Las Vegas seems HUGE and we are definitely here for it. We’ve been to Vegas many times and can only imagine how fantastic this is going to be for fans. When we were there in February 2020, we were thrilled to see BTS on the side of a bus. Now, the whole city will be decorated in their honor. I’m getting emotional, guys!

BTS’ four-day concert on April 8, 9, 15, and 16 at Allegiant Stadium in Las Vegas. You can still find tickets (they are now overpriced from resellers which is frustrating!) on Ticketmaster, StubHub, and Vivid Seats. We parked at a nearby hotel (five minute walk) that we found through the Spot Hero app and it was SUPER easy to get in and out with minimal traffic!

A live screening of BTS’ concert on April 8, 9, 15, and 16 at MGM Grand Garden Arena. During the show in Los Angeles, members even spoke directly to ARMY in the adjoining theater, which was pretty cool! Get overpriced tickets on Ticketmaster, StubHub, and Vivid Seats.

Get your official BTS merchandise at booths outside Allegiant Stadium from April 7-9, and 14-16. From our experience, the merch lines moved relatively quickly, but here’s out tip — if you don’t luck out during the day RUN to the merch booths as soon as the concert is over.

We were on the 100-level so that made it pretty easy for us, but we got to the front of the line within 15 minutes. A lot of shirt sizes were sold out, but we still scored a long-sleeve shirt, sweatshirt, and three packs of photocards.

Official Merch Pick Up at MGM

This shop will be selling BTS merchandise from April 8 to 17 at MGM Grand Garden Arena where there will also be an Express Booth on concert days (April 8, 9, 15, 16). READ THE PICK UP TIMES VERY CAREFULLY. We ordered some things through the Weverse Shop for pick up, but we didn’t realize they had to be picked up before the concert. Our show was on Saturday night and there was no pick up available for Sunday so our order was canceled and refunded. It was a bit of a bummer, so definitely don’t expect to pick up your items on Sunday!

We’re getting a pop-up store. Yay!!! This is where you’ll find official products from the BTS’ ‘PTD on Stage’ tour, and other exclusive items like BTS-themed clothing and goods. Definitely look for the ‘City Signature’ products which are only available in the city where the concert was held. The BTS Pop-Up in Las Vegas is at Area 15/The Grounds from April 5 to April 17. Book your reservation.

Party in the City

Guys, there’s going to be a BTS-themed afterparty at JEWEL Nightclub in Aria Resort on April 8, 9, 15, and 16. *You must be 21 years or older with a valid photo ID to enter and must comply with admission guidelines including dress codes. Click here to reserve your spot!

Behind the Stage: Permission to Dance

This photo exhibition shares incredible behind-the-scenes photography and footage from the PTD on Stage: Seoul concert in March 2022. This includes the rehearsals and preparations that began in December 2021. The event will be held in Area 15/A-Lot from April 5 to April 17. Check out the detailed information and tickets here.

What’s more iconic than the Bellagio Fountain Show in Las Vegas? We’ve enjoyed it so many times, but it’s that much more special set the music of BTS. It started on April 7 outside of the Bellagio, but we got very unlucky. On the day we arrived, we were so busy eating at bb.q. chicken in Chinatown that we had to rush to the hotel to rest before the show. We got a room with a fountain view at Planet Hollywood, but despite opening the window vents we couldn’t hear anything when the show started. Cool, we’d see it after the concert, right? WRONG!

Las Vegas experienced very high winds on the night of our concert. In fact, it felt like a wind storm. It was intense! Anyway, we gathered with a bunch of other ARMY at the fountain after the concert, and just minutes before it was supposed to start, they announced that it was canceled due to the high winds. Sigh. We went back the next day and it wasn’t playing at its scheduled time. We waited for the next show and it happened but the music was VERY quiet in the spot where we were standing. If you missed it, here’s a good video!

Cafe in the City

Feast on a tasting menu made from BTS’ favorite Korean dishes from April 5 to April 17 at the Noodle Shop in the Seabreeze Cafe at Mandalay Bay Hotel. Guests will choose one appetizer, one entree, and one dessert. Click here to book a spot.

Las Vegas is one of our favorite cities, so we are ridiculously excited about this! In fact, we were there when the pandemic began was starting in February 2020. It was my sixth time visiting the city! I’m kind of amazed that aside from our Las Vegas Girls’ Trip and Where to Eat in Las Vegas posts, we don’t have more. I need to do something about that!

What to Eat in Waikiki and Honolulu: Best Cheap, Local Eats