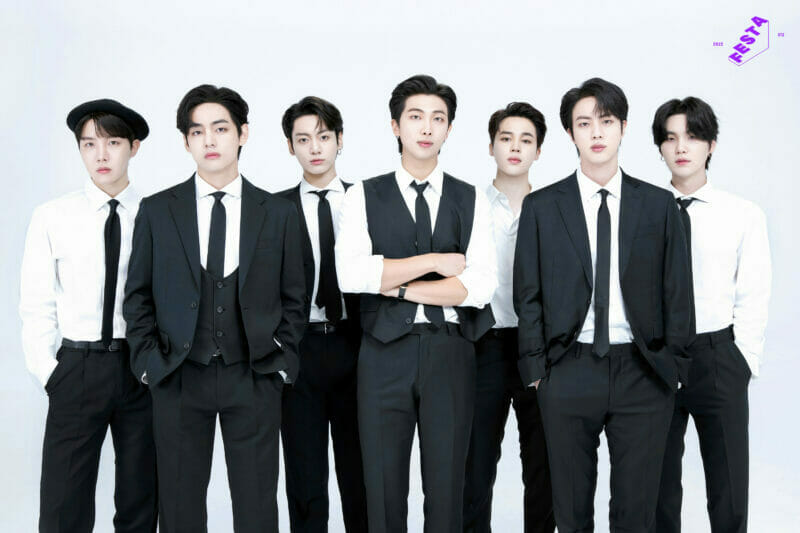 It’s almost that time again! We don’t have all the details yet, but I’ve created this post to get ready for the annual event. It’s pretty exciting, and you never know — maybe I’ll be in Korea this time. I’ve been known to hop on a plane on short notice just to see BTS! Either way, if you’re interested in the BTS Festa 2022 debut anniversary celebration, you’ve come to the right place. We’ll be updating as soon more details come in but scroll to the BTS Proof Comeback Schedule section below for our thoughts on Festa 2022 right now!

Houston, we’ve got a poster! This post will be updated when more details become available. If you’re trying to get to South Korea for this, you’re going to want to keep an eye out for dates (or maybe just head there right now haha). Hopefully, we will know more soon!

What is BTS Festa?

Every year, BTS Festa marks the anniversary of the group’s debut on June 12, 2013 (some argue that it’s June 13th, though!). The annual celebration takes place in June and usually lasts for 10-14 days. During that time, there is an Opening Ceremony and a Closing Ceremony. In between, they share videos, photoshoots/pictures/portraits, special songs, radio programs, and more. We never quite know what we’re going to get, but it’s a yearly reminder that we’re the luckiest fandom!

In 2021, as “Butter” was destroying streaming records, we even got a two-day Muster (for that year it was called “Sowoozoo” which is the Korean name for their song, “Mikrokosmos”)  live-stream concert and fan event. It really was great. My absolute favorite part was the “Daechwita” performance. It’s what sparked Josh to wear his “Taechwita” shirt to the Vegas concert!

So, to recap, Festa is the almost two-week celebration of BTS’ debut and Muster is a concert (that has a unique name each year). In case you’re still confused here’s the calendar for BTS Festa 2021.

Want to learn more about previous years? The US BTS Army site has a great archive. To make it easier to find what you want, here are links to each Festa:

If you’re a Baby Army (new to the fandom), definitely check out those links. I’d recommend starting from 2014 and working your way up. You’re in for a real treat!

In the K-pop music industry, the term “comeback” is used to describe a new album (even if it hasn’t been very long since the last release). BTS has announced their latest comeback, and it’s happening right in the middle of Festa season. Ahhhhhh!!! What does it mean?!

We don’t have a title yet, but there is wide speculation that this will be an anthology along with some new music. There are multiple reasons for this theory, but a leading one points to the fact that the announcement video shows highlights from their videos over the years. Also, we can’t forget that RM keeps emphasizing that BTS is entering a new era.

We’ve got the name for our new album. It’s PROOF!!! They’ve released a logo trailer, and guys lemme tell you that I cried. If you haven’t seen it, I don’t want to give it away but this is more than five minutes of sheer emotion for ARMY. Grab some tissues and get ready for this incredible journey!

It has been confirmed that this is a three-disc anthology album that will feature three new songs. There will be two versions of BTS’s Proof album – Standard and Compact. Here’s what’s in each of them:

Gonna keep it real – we had to buy two of the Standard (because there was no way Hayley and I want to split our photocards!) and we got one Compact because that Discography Guide is fire!

You can pre-order from various sites/apps including Weverse, but please be sure to buy from your own country so that the sales count towards official tallies. We want the boys to kill any pre-order records!!!

We got ours at Target because Amazon took a long time to put theirs up, but they are sold out at this moment. Right now, I do see both available on Amazon. Click here to order: BTS Proof (Standard Edition) or BTS Proof (Compact Edition).

Alright, friends. Here’s the update – we now have a comeback schedule for Proof! As you can see, the tracklist will be announced from May 9-11, which must mean we’re getting the details about one CD on each of those days. Honestly, it’s a long shot but I’d love to see Paldogangsan make the cut. A girl can DREAM, right? (see what I did there!?)

We’ve got details about the release of the concept photos, two MV teaser trailers, and the release date for the lead single. There are two sections that have ??? which means we’ll get some surprise in the future, but let’s zero in on the bull’s eye (it looks like a target, right? Which would fight the whole bulletproof theme!). In the center, on their anniversary date, we’ve got a mystery event. Could this be something special for FESTA????

Of course, we can’t ignore the fact that we’ve know learned that the lead single is called “Yet to Come.” It’s got the tagline (The Most Beautiful Moment) below, which of course is a throwback to their 2015 album, The Most Beautiful Moment in Life, Pt. 1. It is available in two versions and contains nine tracks, with “I Need U” as the lead single and “Dope” as the follow-up. You’ll see a lot of fans refer to this as HYYH or Hwa Yang Yeon Hwa, which is the Korean translation of “the most beautiful moment in life.” If you’re new to the fandom, please check out our post all about BTS to learn more!

Keep checking back for more details. I’ll be updating this post as we know more. So excited!

Why Our Favorite Korean Snack Box is Seoulbox (Review)