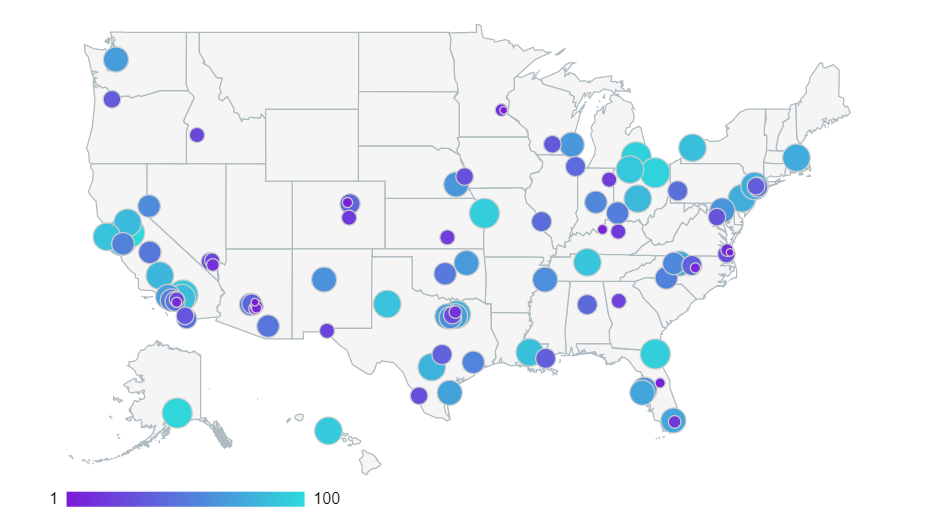 It’s hard to believe that Thanksgiving is just around the corner, but it’s already that time of year! WalletHub has released its Best Places to Go for Thanksgiving in 2019 report and it was really interesting. We’d always assumed that people just go “home” for the holiday, wherever that may be. It makes complete sense, though, that some are simply looking for an affordable getaway somewhere in the United States for the long weekend.

To help travelers decide where to spend Thanksgiving without breaking the bank, WalletHub looked at the 100 largest cities in the United States across 20 key metrics. They compared everything from the likelihood of dealing with a delayed flight to the cost of Thanksgiving dinner, forecasted weather conditions and local volunteer opportunities.

The first Thanksgiving dates back to Plymouth, Massachusetts in 1621. Despite the fact that former president Thomas Jefferson chose not to celebrate the occasion, Abraham Lincoln finally declared it a federal holiday in 1863.  Amid some controversy, Teddy Roosevelt moved the date of the holiday to the second-to-last Thursday in November during The Great Depression. The thinking was that it gave merchants a little more time to make money during the holiday season. So, if you’re unhappy with the frenzy surrounding Black Friday, thank Mr. Roosevelt 🙂

In fact, according to WalletHub, “A survey by the National Retail Federation also found that 34 million people planned to shop on Thanksgiving day in 2018. Luckily, though, it doesn’t cost too much to make a Thanksgiving feast for your family – around $50 on average for 10 people.” Wow…$50? I guess they don’t live in my home. We’re a family of eight (including six kids) and I’ve got to make one gluten-free meal and four vegetarian-friendly meals. That alone costs more than $50, but I digress… Instead, let’s look at this map!

So, what did the WalletHub survey find? Apparently, the best place to go for Thanksgiving in 2019 is St. Paul, Minnesota! While I absolutely love that state, it just feels a little too similar to where we currently live.  Josh’s family all live in Virginia, so they’d probably love for us to do Virginia Beach.

While we love Disney World and Universal Studios, there’s no way I’d want to battle those crowds during Thanksgiving (save 10% off Orlando rentals with code MCO10). Besides, if we were going down to Orlando for a holiday, we’d wait and spend Christmas at Wizarding World of Harry Potter. I guess we’ll just stay in Boise, Idaho this year — it was #24 on the list!

If you’d like to see the full report before booking your holiday travel for 2019, check out WalletHub’s full report. While you’re there, look at where your own city ranked. It might surprise you!

Want to break things down even further? Check out this head-to-head comparison of some of the metrics used to come up with the list of the Best Places to Go for Thanksgiving in 2019. Apparently, it’s a lot cheaper to eat a turkey dinner in Laredo, Texas than it is to feast in Honolulu, Hawaii!

Okay, so our favorite comparison on these charts is the number of Turkey Trots. We LOVE a good Thanksgiving race — we try to do one every year — so we’re definitely scratching Chicago, Illinois off our list of future turkey day celebrations! Maybe it’s just too cold and windy? Either way, in preparation for a night of mashed potatoes, gravy, and more than one serving of pumpkin pie, we need to burn off some calories. We can’t compromise on this, even if Chicago is my family’s original hometown!

In addition to compiling the data to find the Best Places to Go for Thanksgiving in 2019, WalletHub put together some fun facts about the holiday. I’m always completely fascinated by random factoids like this — it gives me something unique to talk about as I pass the stuffing! Here are some things you might not know about Thanksgiving:

A lot of people get stressed during this time of year, especially if they feel like things could turn dramatic at family gatherings. If you’re struggling, please read our tips for How to Deal with Holiday Travel Anxiety. In all honesty, that’s part of the reason why we stay home for the holidays. We battle anxiety to travel all the time, but we also have boundaries — and it’s okay if you do, too.

If you’re a Thanksgiving purist, please forgive us for this part of the post. And to be completely honest, we celebrate Thanksgiving with a great tourtiere (meat pie) in October (as I did growing up in Canada!) partially to avoid the discomfort. Yes, we’re going to mention Black Friday deals.

While it will be too late to book a flight or hotel for Thanksgiving by then (obviously!) we might be able to help you score some travel deals that you’ll be thankful for! Be sure to check back for our Black Friday sales page as well as holiday gift guides for travelers, Disney lovers and Harry Potter fans.

In the meantime, we hope this list of the Best Places to Go for Thanksgiving in 2019 helped you narrow down your travel this month. It’s not too late to score some last-minute deals (Frontier Airlines is having a great sale!). No matter where you are, we hope that you and your family have a wonderful Thanksgiving holiday.