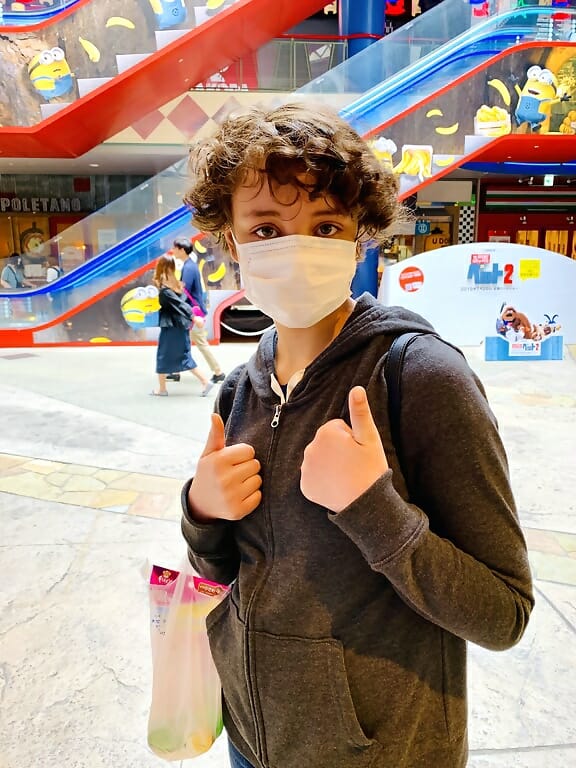 There’s so much to see and do at amusement parks, which is why so many people flock to them every year. Sometimes, guests travel from far away just to spend the day at a park, investing a lot of time and money into their trip. Unfortunately, this can lead to people trying to power through an illness, putting others at risk of catching their germs. As you can imagine, this is tough for someone who lives with travel anxiety and obsessive compulsive disorder (OCD). That’s why we try to take precautions. Here are five ways to avoid germs at amusement parks.

In the spring and summer months, the sneezing and sniffling you hear may be due to seasonal allergies, but it can also be caused by something else. This is especially true if you’re visiting a park during cold and flu season. People who have a short window to get away during Thanksgiving break, for example, are going to be less likely to stay home if they’re sick. It’s an unfortunate reality of travel. 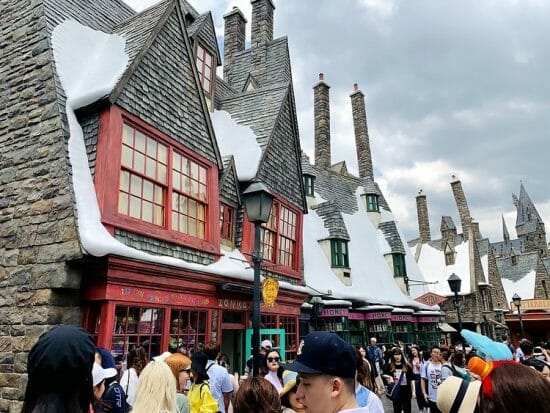 If you’re standing near someone who might be under the weather, do your best to keep your back to them. By facing away from them, any grossness that might spew out of their nose or mouth has a smaller chance of hitting you directly in the face. It’s always surprising how disrespectful and inconsiderate some people can be. If you’re comfortable (and I’m usually not!), you can always ask a careless cougher to cover properly. This can protect yourself and others around the sick person.

Here’s a reality of theme parks — sometimes, people throw up on rides (it’s happened to Josh and we saw it on Yukon Striker at Canada’s Wonderland!). Occasionally, they might even pee themselves (I’ve seen it!). For this reason, you always want to check the seats for any signs of nastiness before you sit down. This is definitely among the top five ways to avoid germs at amusement parks! 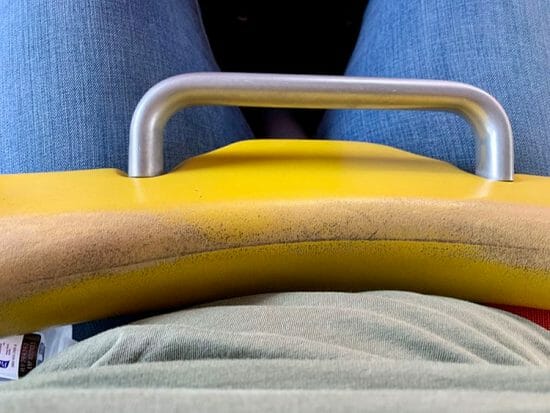 If you’re really concerned about getting sick at a theme park, you can always use a little sanitizer (I keep one clipped to a belt loop or backpack) or a disinfectant wipe (I always carry the travel size with me!) to clean the surface of the lap bar. Of course, you’ll have to do this quickly and discreetly to avoid disrupting and delaying the ride for others, but it can be worth it for the additional peace of mind.

On certain, more intense rides, you may have to wear a shoulder harness. We’re seeing these used less as rides try to minimize obstructions to the ride experience, but they’re still very common. Illness-causing viruses tend to find their way into our bodies through our eyes, nose and mouth, so you want to avoid having anything touching your face. When you’re on a ride that uses these types of restraints, that might be challenging. 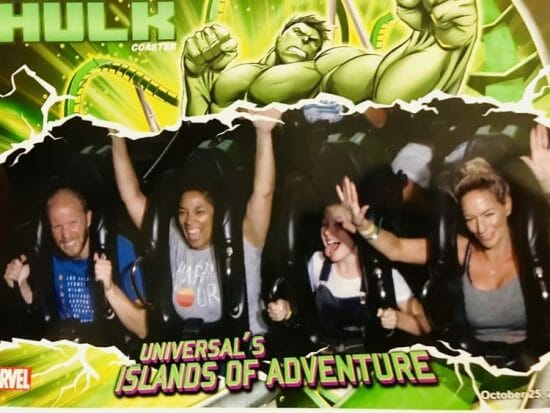 What we’ve done is use a bit of hand sanitizer or a disinfectant wipe on areas where contact is most likely. Over time, you’ll be amazed by how quickly and efficiently you can do this without impacting the boarding process. Then, when you’re whipping around at 75mph, you won’t be preoccupied by your face potentially touching a dirty surface.

If you’ve ever seen the film Adventureland, you’ll understand why I’ve got trust issues with food at amusement parks. For a long time, I didn’t even attempt to eat anything at all.

One strategy we’ve adopted is to watch the food handling practices before ordering anything. I’m aware that this could make me look paranoid (I’m okay with that — because I am paranoid!), but as they say: an ounce of prevention is worth a pound of cure!

You’d be surprised how much you can learn by just stepping back and pretending to look at the menu for a few minutes. If we see a bunch of red flags, we move on. It’s tough, of course, if there are limited options for grabbing a bite. It’s expensive, but I’ve been known to grab prepackaged food (granola bars, chips, etc…) from the souvenir shop if the park food seems too sketchy. 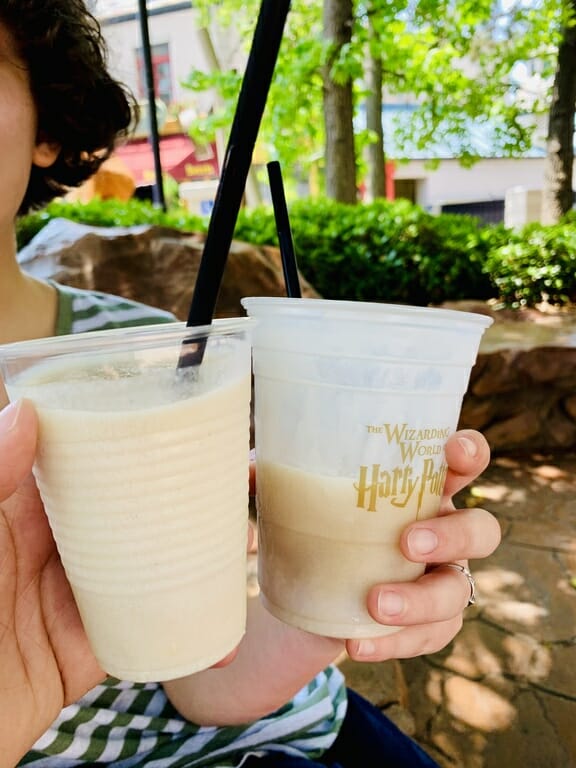 Fortunately, many parks are now allowing people to bring in their own food and drinks, so if this is an option for you, we recommend it. You can save a lot of time and money by bringing your own goodies — just try to avoid anything that requires refrigeration such as yogurt or meat.

If all else fails, you can always ask to speak to a manager about how food is being handled. There have been times when I’ve requested that a worker put on new gloves before preparing my food, too. It can be uncomfortable to speak up in this way, but if it keeps you healthy, it’s worth it!

Yeah, this is our least favorite topic for so many obvious reasons. Of course, if you spend a full day at an amusement park, you’ll probably have to go to the bathroom at some point. Unfortunately, thousands of other people have done the same. At a bustling theme park, you might encounter someone struggling with motion sickness (or worse!), poopy diapers and everything in between! Worst of all, who knows how well those stalls are being cleaned!

After years of hypervigilance, we try to rely on one tried and true strategy — find the “quiet” bathrooms! Every park has areas that are busier than others, so I try to avoid using the facilities in those hot spots. Instead, I look for bathrooms near the less popular attractions because they tend to be used by fewer people and could be less crowded. Honestly, this strategy has worked very well over the years, so we hope it works well for you too!

We’ve got to say, though, that the best theme park bathrooms were at Universal Studios Japan and Fuji-Q Highland in Japan. Here in the states, we’ve been pleasantly surprised by the toilet situation at Lagoon. That being said, we prefer to skip this entirely whenever we can. As such, if the park allows readmission (Universal Japan doesn’t, for example), we will leave for a midday break, have lunch at a clean restaurant and use the bathroom there. I’ll say that Starbucks tends to be decent!

No post about our top five ways to avoid germs at amusement parks would be complete without sharing what to pack! We carry a backpack or other small bag when we visit amusement parks and always have the same things inside:

So, the Kleenex Germ Removal Wipes are a new-ish product. Walmart gave me a sample in a grocery order and I fell in love. Basically, it’s like a Clorox wipe but designed for your hands and face. After a long flight or a day of thrill riding, I use them to fresh up. They are gentle and the scent is very pleasant and mild. Plus, it’s an easy way to avoid germs at amusement parks.

Also, Josh gets motion sickness, so we’ve started carrying Meclizine and MotionEaze to make sure he’s in tip-top shape. The change of shirt is optional, but can be really great if you spill something or need to freshen up. 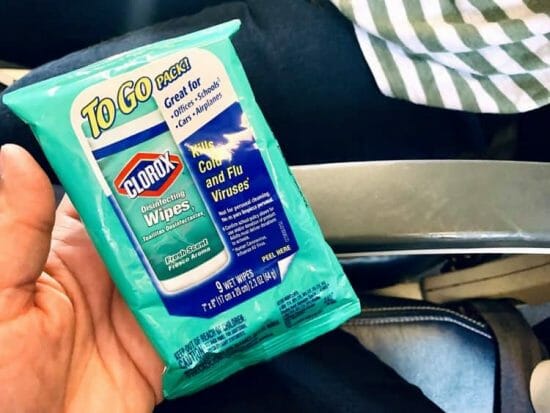 It’s not easy to be concerned about germs as you go through life, and it can be even more difficult at a crowded place like Disneyland or Cedar Point. Bravo for reclaiming your life and continuing to do the things you love despite your anxiety! You’re doing an amazing job, and it will get easier over time. Keep going! 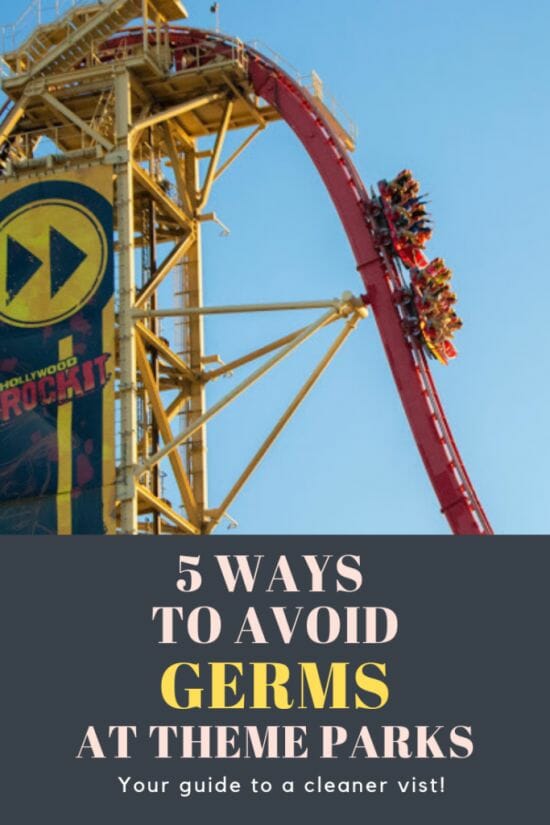