It’s been more than a year since I adopted a low carb lifestyle, so we haven’t had a lot of pasta. In fact, I cannot remember the last time I had a bowl other than a few trips to Noodles & Company and, really, does that even count? So when we saw the Groupon for Asiago’s in Boise, our curiosity was definitely piqued.

While I tend to keep my diet pretty stable, I do believe in occasional indulgences. Back in Virginia, Josh and I used to really enjoy a night out at Maggiano’s, so we were hoping to find a new place to get our date night Italian fix — and we did!

Going in, I was a little worried about being comfortable. Some of the reviews talked about cramped quarters and drafty spots so I decided to be proactive. On their website, you can reserve a table and I opted for something that was far from windows and doors while offering a little more privacy. It turned out to be perfect!

Still, I could see how, if you ended up in a different part of the restaurant, the experience might not be the same, so I’m glad we lucked out. There were only a few other tables in our area and our fellow diners tended to be a quieter, older group.

As an appetizer, we ordered the Arancini Carbonara, which consisted of four risotto balls with smoky bacon and egg coated in a crisp panko crust and stuffed with white cheddar. It came with a side of bacon jam for dipping.

Josh was pretty neutral about it, but I absolutely loved it. I almost wished he’d sacrificed the rest of his serving if he wasn’t fully enjoying it but, alas, he kept it all for himself. While this appetizer gave me hope for whatever was to come, Josh was starting to wonder if he was going to like his entrée.

After being seated, warm bread was brought to our table along with freshly shredded cheese and olive oil. Maybe it was my carb deprivation, but that bread was incredible (and they brought a refill – thank you!).

Hilariously, we both ordered the same thing — Cinque Formaggi — which consisted of fettuccine noodles covered in a rich creamy sauce made from a blend of romano, fontina, gorgonzola, asiago, and aged provolone cheeses. We both added marinated chicken for good measure and it was entirely worth it! 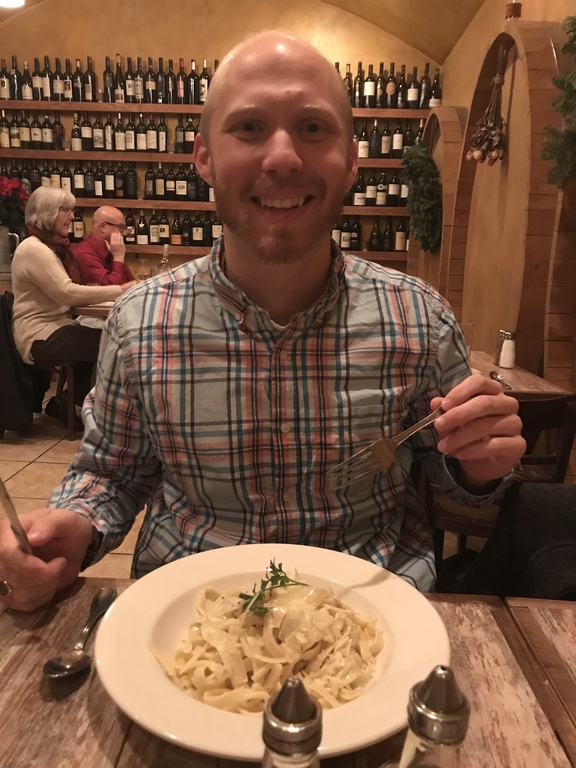 Reminiscent of alfredo, but with a stronger flavor, this dish was dynamite! We’re both interested in trying the Traditional Lasagne on a future visit, but I’d be very happy to have the Cinque Formaggi again!

With a Groupon offsetting the cost of our meal, we decided to indulge in a dessert. Josh was planning to pick up some Chip cookies on our way home, so he yielded to me when I suggested we try the Sour Cream Rum Cake, even though neither of us was expecting much. I figured, why not live a little?

When Josh saw my reaction after taking the first bite, he picked up a fork. Then, we fought for every piece until it was gone! It reminded me of french toast, in a way, but it was also different from anything I’ve ever had before. The spiced pecans, the salted caramel rum sauce… I knew I’d pay for my sugar splurge the next day but it was worth it! Highly recommend!

We thoroughly enjoyed our experience at Asiago’s in downtown Boise. The ambiance was good, the service was great, and the food was excellent. Right now, I’m being super strict with my carb consumptions because I’m competing in the Orangetheory Transformation Challenge for the second year in a row but, when I’m done, this is going to be one of the first places I visit!