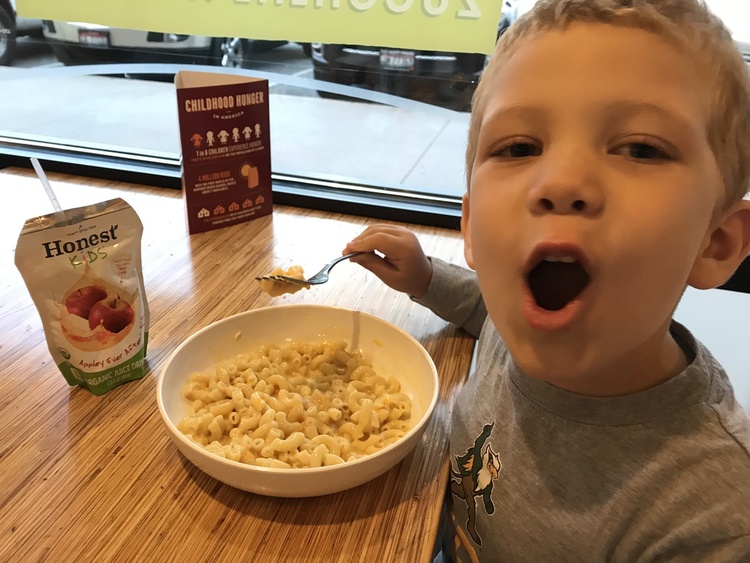 We didn’t know there was a boom going on when we relocated in 2016. In fact, we’d never even visited Idaho before we moved here. With six kids, we moved across the country in search of great weather, affordable housing, and an outdoor lifestyle. Fortunately, we’ve found everything we’d hoped for and more. Now, we’re sharing what we think are the best family restaurants in the Boise area!

Many families are moving to Boise, Idaho. You’ll find a variety of kid-friendly restaurants in the Treasure Valley, ranging from upscale dining to casual fare. This post will share suggestions that work for different budgets and different occasions.

With six kids of various ages, we’ve learned a lot about dining out as a family in Boise. To be completely honest, we haven’t been brave enough to do it as a group of eight — maybe someday. We have, however, enjoyed many meals together, and we tend to stick to the same places.

When I was a kid, I can remember watching Cheers and wondering if such a place could really exist. Then, we became regulars at TGI Friday’s in Nampa, and that became our reality. You’ve probably gone to a Friday’s before, but you’ll have a different experience here. Yes, the menu is the same, but the service is ridiculously good. We feel valued and the folks who work at that restaurant have become friends. 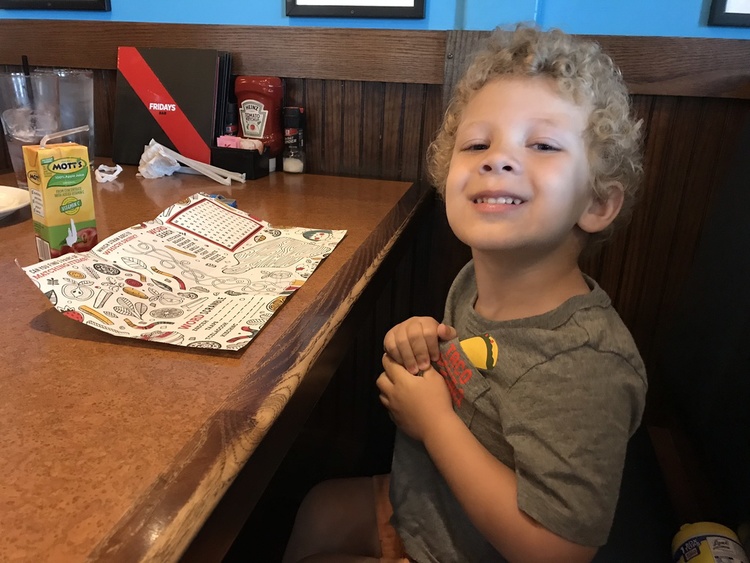 There’s no other Friday’s in the Treasure Valley, so you’ll need to drive about 20 minutes outside of Boise, but we think it’s worth it. For a couple years now, this is a date night staple, and we feel just as comfortable sitting here with our young adult kids as we do with talkative toddlers. Basically, we’re treated like family which means a lot when you’re spending hard-earned money.

What We Order at TGI Friday’s

My oldest son is a carnivore, my oldest daughter is a vegetarian, I’m usually eating low carb (keto helps my anxiety) and then we also need kids menus. Friday’s has something for all of our needs, which is fantastic.

You’ll find a lot of shareable appetizers at Friday’s including traditional or boneless wings, potstickers, giant onion rings and mozzarella sticks. I’ve also been known to order the Bucket of Bones (wings, ribs and fries) as my meal!

For entrees, some of our favorites include: Bacon Cheeseburger, Sizzling Chicken & Cheese, Big Ribs, Center-Cut Sirloin, and the New York Strip. For kids, we tend to order the macaroni and cheese over and over again. If we don’t want to order a full kids meal, we just pick it as one of our sides and then give the mac and cheese to one of the littles.

Don’t forget to enroll in the Stripes rewards program if you haven’t already. As members, we receive free chips and salsa every time we visit Friday’s and we also earn points. The points accumulate quickly and then we use them to cover entire entrees (save up for the steak or ribs for best value)!

When we lived in Richmond, Virginia, we ate at a lot of Mexican restaurants. After moving to Idaho, we struggled to find something we liked. Pueblo Lindo is very popular in nearby McCall, so we were excited to try it when they opened a location in Meridian (a suburb of Boise).

The atmosphere is really relaxed making this a great family restaurant in Boise (or the surrounding area). It’s been wonderful for a cozy dinner or a big meal with the kids. We were among the first to have a meal at the restaurant, and since then, we’ve celebrated many birthdays and milestones at Pueblo Lindo. The interior is spacious and clean, the staff is friendly and warm, and the food is fantastic. It’s also shockingly affordable.

What We Order at Pueblo Lindo

As soon as you sit down, they start bringing the chips and salsa. We could probably just sit there and eat it until our stomachs explode — it’s that good. They are always kind enough to bring me the spicy one when I ask for it.

We tend to stick to the same few things — the Pueblo Lindo Enchilada, fajitas, burritos or tacos. The menu gives you options, so my oldest daughter can stick with all veggies, my son can choose proteins like lengua (no tongue for me, sorry!) and the little guys can keep it cheesy with quesadillas. My fellow keto-eating daughter and I sometimes keep it low carb by eating just the fajita meat and veggies with no tortillas. It’s all delicious!

They’ve also got fantastic margaritas made with fresh ingredients (not for the kids!). Again, the prices are so reasonable here that adding a drink really won’t break the bank. We’re always stunned when they bring the bill because it’s always lower than we expect. For fresh, home-style food near Boise that’s affordable and family-friendly, you can’t go wrong with Pueblo Lindo.

If your brood has different dietary needs like ours, Blaze Pizza is among our favorite family restaurants in Boise. From the type of crust to the toppings, you customize your pie and we’ve always been satisfied. Recently, they’ve even added keto-friendly and cauliflower crusts which is really wonderful because we have a few people with gluten and wheat sensitivities in our home. 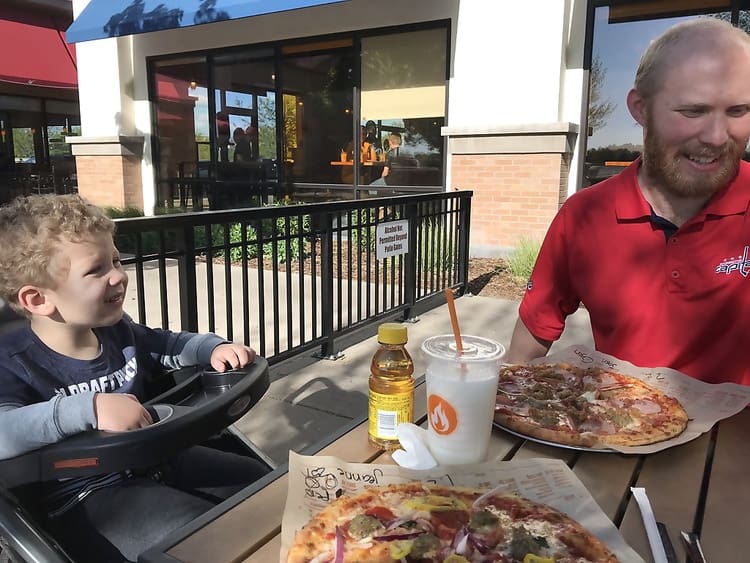 Famous for their “Fast Fire’d” pizzas, you’ll walk down an assembly line choosing from different sauces, cheeses and toppings along the way. If you want to skip the dough entirely, they also sell salads. This versatility may be one of the reasons why Blaze is one of the fastest-expanding restaurants in the country.

What We Order at Blaze Pizza

We usually stick with the “Build Your Own” pizza. First, you pick your fresh-made, from scratch dough. There’s a variety of growing options, including a keto crust. Then, you make your way down the line, customizing your order as you go along. When you’re satisfied, they pop it in the oven for just 180 seconds and it’s ready!

One pizza is plenty for one person, and if you’ve got kids, they can definitely share a single pie. It’s cut into four pieces, and our four-year-old is more than happy with just one slice. If you can’t finish it all, there are empty boxes that you can grab to pack your leftovers.

We love Noodles & Company. There used to be three locations in the Boise area, but right now there are just two. When I’m being super strict with my keto eating, this isn’t a great choice. If I’m being a little more flexible or have a craving, it’s a crowd-pleaser (when they get the order right!). That’s why we count it among our best family restaurants in Boise. There’s something for everyone.

One of my favorite things about Noodles & Company is that they use all-natural ingredients. You can really taste the freshness. What I don’t like is that my favorite dishes tend to be removed or replaced from the menu. First they got rid of my Indonesian Peanut Sauté, so I fell in love with the Spicy Korean Beef Noodles. Now those are gone, too 🙁

What We Order at Noodles & Company

This feels so redundant but we order noodles — all types of noodles — at Noodles & Company. In our experience, many kids love different types of pastas, although, ours tend to order macaroni and cheese whenever they can.

For the adults, Penne Rosa, a slightly spicy red sauce with optional meat (choose the parmesan crusted chicken) or even spaghetti with meatballs is a solid choice. We love adding potstickers as an appetizer to share and then we split a giant Rice Krispy treat for dessert.

After taking Hayley to Japan earlier this year, she fell in love with chicken katsu. There’s a place called CK Hawaiian that makes it hot and fresh. It’s convenient because it’s right down by the IMAX theater where we like to see bigger movies, but there’s also an outdoor plaza where you can sit out and listen to live music in the summer. Our kids love dancing, especially in public!

It’s a smaller family restaurant in Boise and there are no booths. This might be best suited for kids who are five years old and over. My teen really loves eating here, even though it’s a little dingy and dated inside. We just bring our disinfectant wipes and hand sanitizer in case the table looks a little rough.

What We Order at CK Hawaiian BBQ

As mentioned, we really love chicken katsu. This Japanese dish is comprised of a thin chicken breast filet, coated in panko bread crumbs and then pan-fried. It’s typically served with rice, katsu sauce and curry gravy. There are other places that serve katsu around Boise, but it’s not as fresh and they don’t all carry traditional curry sauce. We gotta have that!

There are other yummy things on the menu including gyoza (Japanese dumplings or potstickers), fried rice, teriyaki chicken and Hawaiian plates. It’s really worth checking out if you’re ready for a culinary adventure. So good!

Family Restaurants in Boise Are Growing

We’ve chosen a few family restaurants in Boise that we enjoy, and we hope you’ll enjoy them too. If they miss the mark, though, don’t worry — new eateries are opening in the Boise area all the time. While some locals are disappointed with all of the growth (which is understandable), it does mean that residents have more options.

We’re not sure how long we will live here, but as we keep exploring, we’ll keep updating this list. We haven’t been as adventurous as we’d like, because it’s hard to go anywhere with a set of twins, but we’re getting there. In the meantime, these kid-friendly restaurants have served us well!