Universal Studios parks bring a lot of joy and happiness to families around the world. While there are four currently in operation (Orlando, Hollywood, Japan, and Singapore), they have more locations planned in Beijing, Moscow, and South Korea.

We’ve visited three Universal parks and resorts, and we’d love to share our thoughts on each one. That way, when you plan your family vacation, you’ll know which one is best for you! Don’t forget to check out these airlines that offer free or discounted kids’ airfare, too!

Originally opened as a studio tour in 1915, Universal Studios Hollywood became a theme park in 1964. Almost three decades later, they added Universal CityWalk, an area filled with restaurants, shops, nightclubs, and even a movie theater to enhance the experience for guests. Now, these areas can be found at all Universal parks!

While there are some partner hotels, you might be shocked to learn that there are no official hotels connected with Universal Studios Hollywood. As such, you won’t be staying on-site and won’t reap any of the benefits that you’ll find at other Universal parks.

As mentioned, the Universal CityWalk in Hollywood is well-established and many locals flock to the area whether they visit the theme park or not. There are solid offerings from Blaze Pizza to LudoBird (chef Ludo Lefebvre’s fried chicken joint), and a Cinemark that includes an IMAX theater. 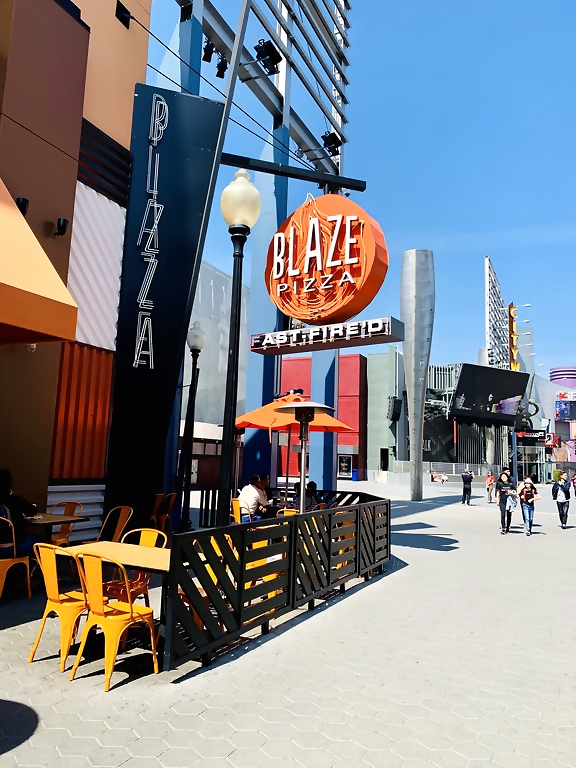 Hollywood’s Universal CityWalk has a lot to offer without being too large. If you’re traveling with small kids, this is your best bet for finding food and a break from the hot sun, especially considering there are no official hotels on the property.

You’ll find many of the same rides at Universal Studios, no matter where you are in the world. Head to Springfield to get on The Simpsons Ride or check out Transformers 3-D. Be sure to review the ride height requirements before lining up with small children. 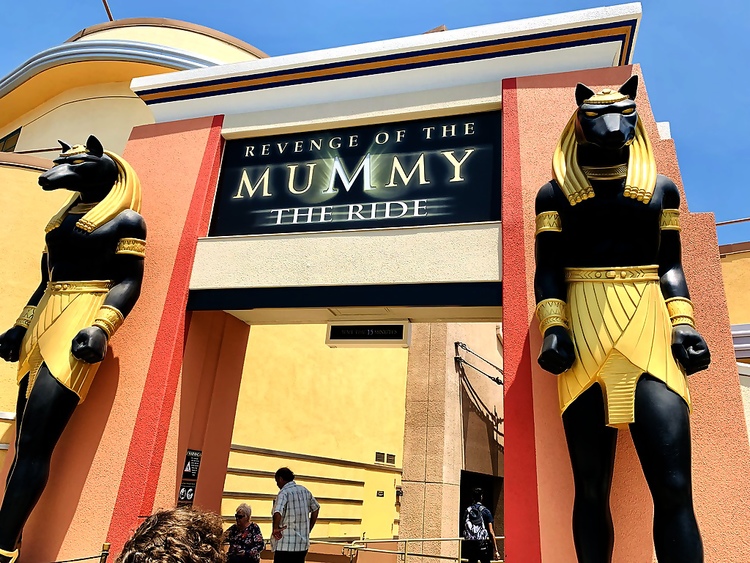 There are a few things, though, that make Universal Hollywood different than the other two we’ve visited:

A quick note — Universal Studios Hollywood has an upper and lower lot. What this means is that you have to take several spaced out escalators to get between the areas. The view is great while you’re making your way through the park, but it’s not a short distance.

Harry Potter fans can walk through the streets of Hogsmeade, take selfies in front of Hogwarts, and sip on Butterbeer to their heart’s content. Watch our video review!

Formerly called Universal Studios Escape, Universal Orlando resort joined the family in June 1990. It started as just one park and has grown (and continues to grow!) into three — Universal Studios Florida, Universal’s Islands of Adventure, and Volcano Bay (waterpark). You will need to have a separate ticket for each park, or you can get park-to-park passes. 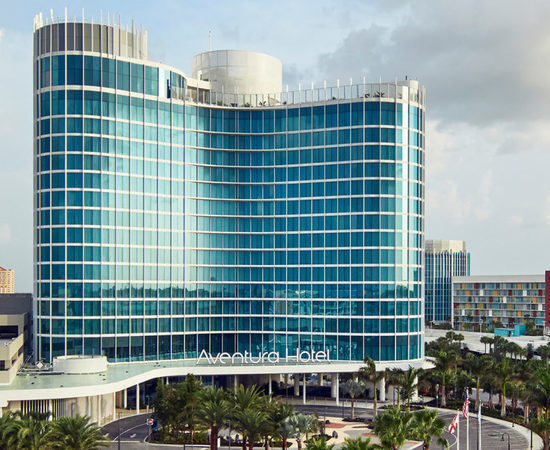 When you stay at an official property, you can enjoy benefits such as early admission to The Wizarding World of Harry Potter, transportation to and from the parks, and free delivery of purchases made at Universal shops to your hotel. 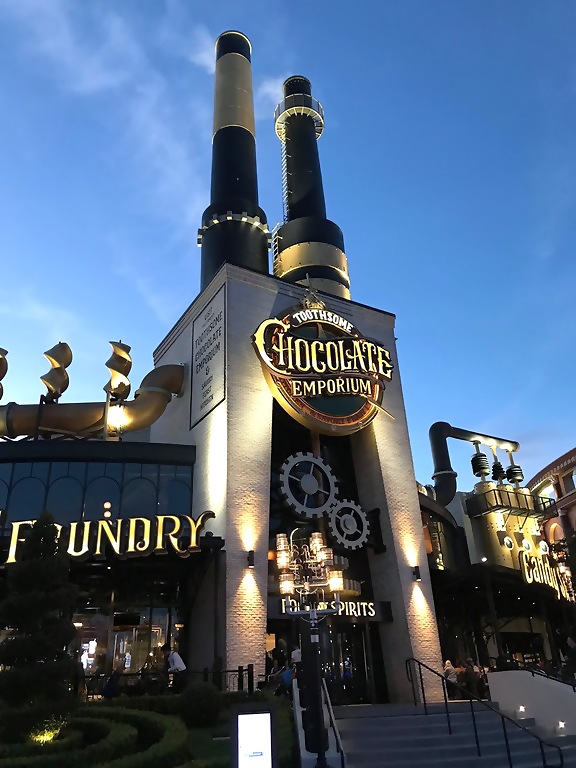 The CityWalk is always undergoing changes, and recently they’ve added a new restaurant. Big Fire, as the name suggests, offers delicious food cooked over open flames. The options include a few vegetarian-friendly dishes, meaty platters, and even tableside s’mores. We can’t wait to check it out!

There are rides for thrill seekers of all levels at Universal Orlando Resort. Whether it’s the cute little Woody Woodpecker’s Nuthouse Coaster or Doctor Doom’s Fearfall Tower, families can enjoy a wide range of attractions.

Parents with children who are too young or too scared to get on a ride can make use of the ride swap system, allowing them to queue up together but take turns once they reach the loading area. 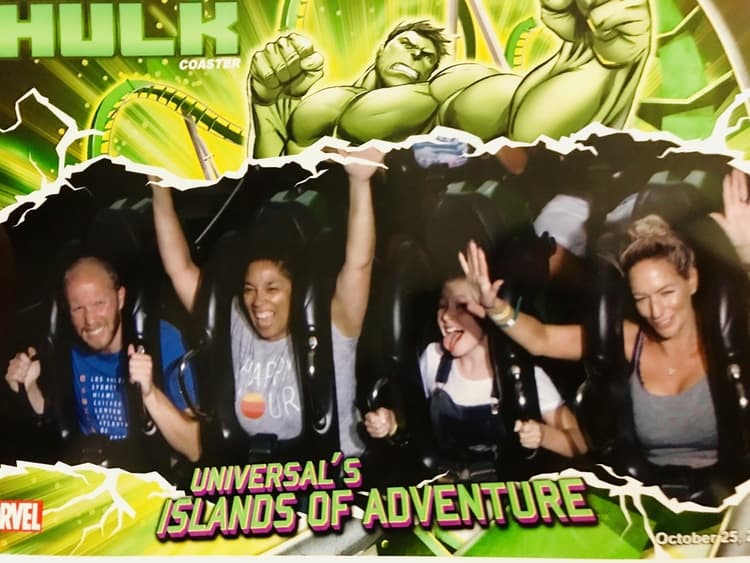 Roller coaster enthusiasts can hop on Hollywood Rip Ride Rockit or our favorite, The Incredible Hulk Coaster, if they want something more extreme. Be sure to check ride height requirements before getting in line and read our Top 5 Rides at Universal Studios Florida and Top 5 Rides: Universal’s Islands of Adventure to get ready!

You won’t find a bigger, better Wizarding World of Harry Potter anywhere! For the best experience, you’ll need to make the trip to Universal Orlando Resort. Here’s the thing — Diagon Alley is located at Universal Studios Florida and Hogsmeade is at Universal’s Islands of Adventure, so you’ll have to buy tickets for both parks to visit each enchanting area. 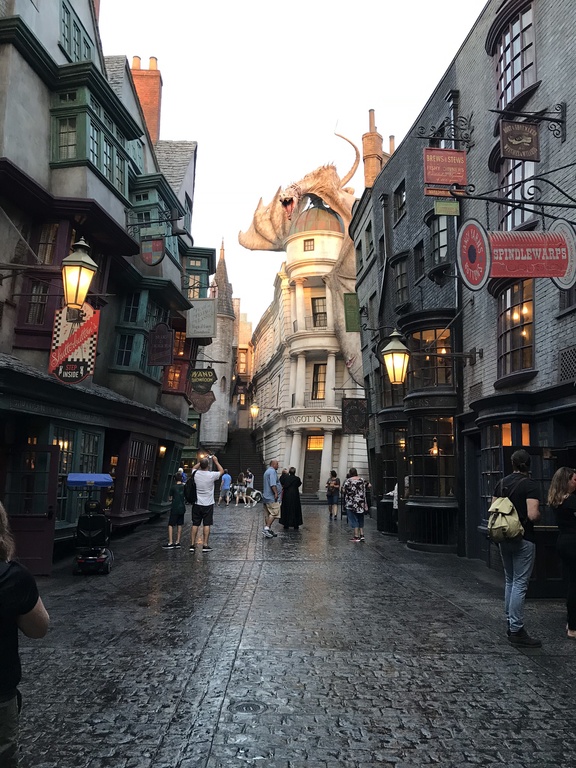 Yes, it’s expensive but if you’re a Harry Potter fan, it will be worth it! Keep in mind also that, in order to ride the Hogwarts Express between the parks, you’ll need to have park-to-park passes. Sorry folks, I don’t make the rules!

Be sure to check out these rides:

We’ve put together a list of 25 Magical Tips for Wizarding World of Harry Potter. While many of these can be applied to any location, it was designed with the Universal Orlando Resort location in mind.

Located just outside Osaka, Universal Studios Japan has been open since 2001. We absolutely loved the familiarity of being in a Universal park, but we also adored the ways in which it was uniquely Japanese. From the local food options to the highlighting of characters such as Hello Kitty and Sailor Moon, it was such a fun experience.

There are many official hotels connected to Universal Studios Japan and they are all within a few minutes walking distance. We stayed at the Universal Port Hotel, which has a Minions theme, and we were thrilled. It took fewer than five minutes to walk to the main gates and that was far compared to the others, which have lobbies right in Universal CityWalk! 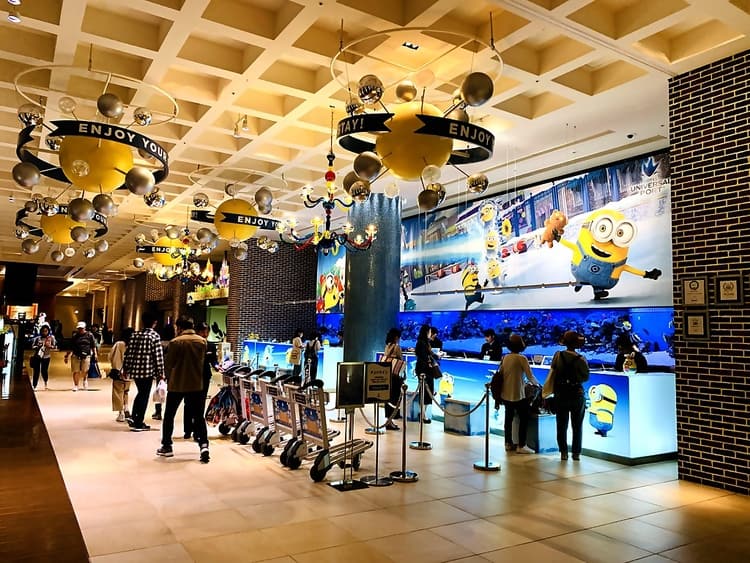 We did not hear about any special perks such as early admission, but that might have been lost in translation. According to our research, though, the only real perks are proximity, having a Universal shop in the hotel, and being able to buy park tickets on site.

It’s not as big as the others, and there’s no movie theater, but this is our favorite CityWalk so far. Why? Because it offers a wider range of options. The Japanese love convenience stores, so it was great to have several right there outside the park. You can fill up on food like corn dogs and fried chicken for pennies, which saves time and money! 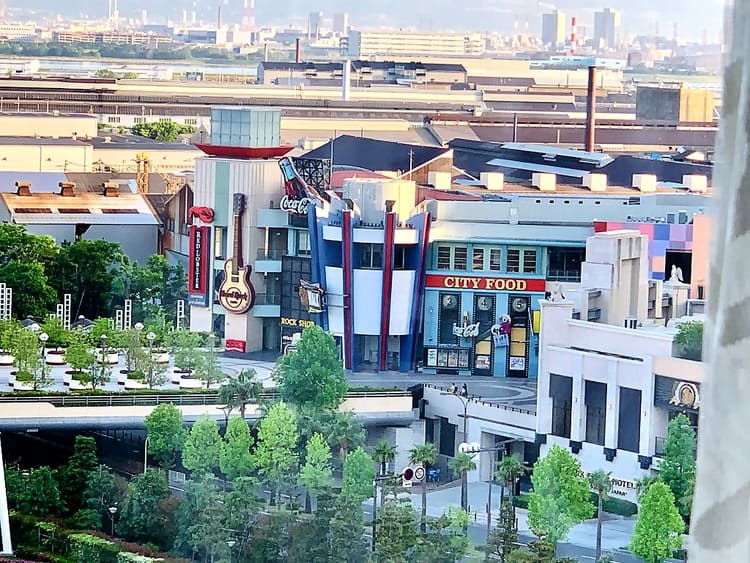 In addition to restaurants such as McDonald’s and TGI Friday’s, there were Japanese chains such as Mos Burger and more. Plus, there was a drug store, which is convenient if you’re suffering from allergies, aches, or other ailments. Tucked away in the back, we also found a grocery store where we picked up a few items to bring back home to the U.S.!

In addition to common Universal Studios rides such as Jaws, The Amazing Spider-Man, and Jurassic Park, USJ has two roller coasters. Hollywood Dream reminds us of Hollywood Rip Ride Rockit in that you can choose your soundtrack, but there are no inversions. You can, however, ride the whole thing backwards!

One thing to note, I wear a size L, and I was almost too big for the lap harness on the ride. The Japanese tend to be a lot smaller than us, so keep that in mind when making your plans.

The Flying Dinosaur is a suspended coaster and it looks pretty intimidating. Fortunately, we battled our nerves and climbed on because it was incredible. If you find yourself at Universal Studios Japan, definitely give it a shot and knock these two rides off your roller coaster bucket list! 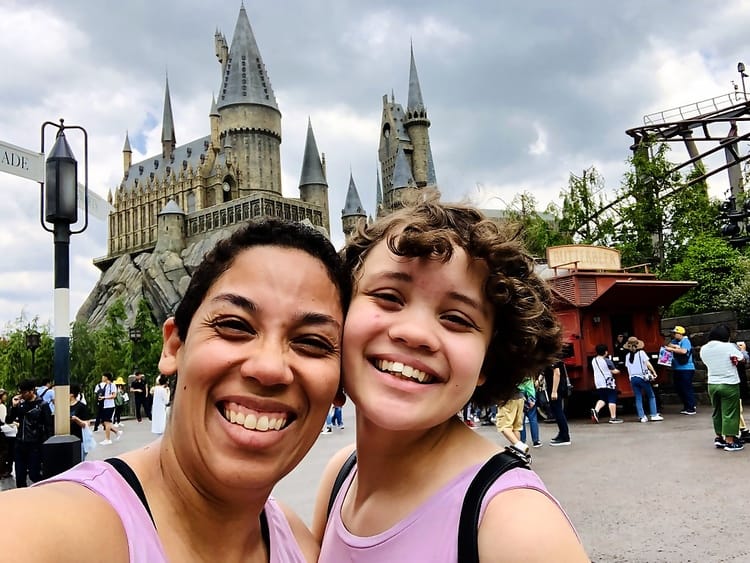 One of the most fun things about visiting Wizarding World of Harry Potter in Japan was that everything was in Japanese (as it should be). Hearing Dumbledore, Harry, Hermione, and Ron’s Japanese voices just made our day. It was fantastic! Here are the rides you’ll find:

The restaurants, including The Three Broomsticks and Hog’s Head Pub, sell the same food you’ll find at other Wizarding World locations, and you can still get Butterbeer in Japan too! The prices are almost identical, as well, is awesome.

Which Universal Studios Park is Right For You?

Now that we’ve talked about three of the Universal Studios parks, which one should you visit? Honestly, we’d recommend checking out all three, but if you had to choose just one, go for Universal Orlando Resort. It has the most to offer and the largest Wizarding World of Harry Potter location.

Second to that, we’d suggest Universal Studios Japan. It has all that you could love about Universal, but with that Japanese flair. It just makes the experience even more fun. Also, we can’t prove it, but Wizarding World of Harry Potter just felt nicer in Japan over Hollywood.

That being said, if you just want to spend a few hours at a theme park and you’re in the Los Angeles area, you can’t beat Universal Studios Hollywood. We’d choose it over Disneyland any day! It’s less crowded, the food is better and there’s more for guests of all ages.

What do you think? Which is your favorite Universal Studios park? 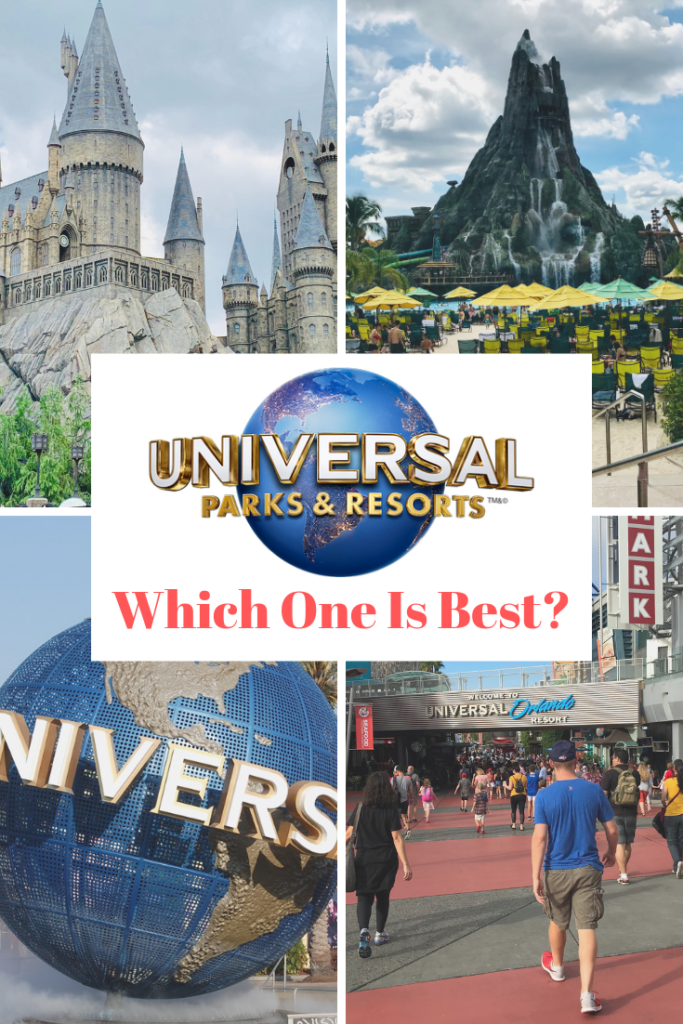