Heading to the Wizarding World of Harry Potter at Universal Orlando Resort? We absolutely love it there, and we’ve been to Wizarding World in Orlando, Hollywood, and Japan. You’re going to have a great time! Before hopping on one of the park’s newest rides, you might be wondering — how scary is Hagrid’s Magical Creatures Motorbike Adventure? We’re gonna give you the information you need to decide for yourself!

As people with travel anxiety, we’ve learned that doing extensive research helps us do the things that scare us — like overcoming fear on roller coasters! Let’s take a closer look so you can get ready!

Where is Hagrid’s Magical Creatures Motorbike Adventure? While the Wizarding World of Harry Potter exists at multiple Universal Studios parks around the world, there is only one Hagrid-themed ride and it’s located at Universal’s Islands of Adventure.

To visit this park, you will need to buy tickets for Universal’s Islands of Adventure. You cannot get to this attraction if you only have passes for Universal Studios Florida. We highly recommend buying passes that give you access to both parks. This will allow you to board the Hogwarts Express to commute between Hogsmeade and Diagon Alley.

Once inside Universal’s Islands of Adventure, you’ll want to head towards the back of the park. You might be surprised by how long it takes for Hogwarts to actually come into view. There’s a lot of greenery at the Florida parks, so if you feel lost, don’t hesitate to ask someone for directions!

Yes. Hagrid’s Magical Creatures Motorbike Adventure is a roller coaster, and it’s definitely not for little kids. The wait times are very long, so always be sure to check the ride height requirements before joining the queue. 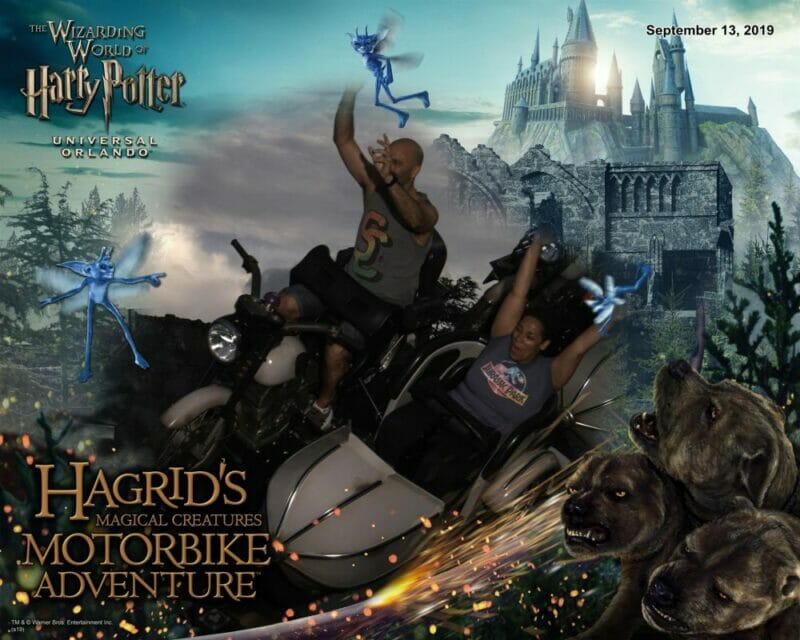 The Hagrid ride is a “story coaster” that will take you through different parts of the wizarding world. You’ll see magical creatures, venture into the Forbidden Forest, and finally see what a Blast-Ended Skrewt looks like, since they didn’t make it to the Harry Potter films!

Above all, though, Hagrid’s Magical Creatures Motorbike Adventure is a launch coaster. In fact, there are seven launches on this bad boy and they are all thrilling. They could be a little intense for those who don’t like the feeling of very sudden acceleration. There’s a vertical drop of nearly 17 feet and a 65-foot “spike” that riders will climb (and then drop backwards) at more than a 70-degree angle.

Here are some quick facts about the Hagrid’s Magical Creatures Motorbike Adventure ride:

A quick word about the max speed for this ride. We’re experienced roller coaster enthusiasts and we’re used to speeds much higher than this. That being said, the open nature of this ride and the frequent launches make this feel faster than 50 mph. Fortunately, it’s exhilarating and fun!

The queue area for Hagrid’s Magical Creatures Motorbike Adventure is a journey in itself. If you rode Dragon Challenge before it was dismantled, you’ll recognize the exterior areas. Then, you’ll pass through the archway and enter the Forbidden Forest. You will see a lot of cool sculptures and creatures you’ll recognize, but I don’t want to give anything away. There are some dark and creepy things, but you should expect that from anything associated with Hagrid!

After passing through some dark hallways in the queue, you’ll see a test seat and a screen providing safety instructions. I’m plus size and had no trouble on this ride, but if you have any doubts, try the test seat.

To get on Hagrid’s Magical Creatures Motorbike Adventure, you’ll have to climb into the ride vehicles on a moving conveyor belt. You don’t want to struggle at this point. It’s better to determine that you will fit in the seats ahead of time.

Each row seats two passengers — one on the motorcycle itself and one in the sidecar. Riders can choose between hopping on the seat modeled after Hagrid’s motorcycle, or the sidecar. I’ll be honest — the motorcycle seemed a little intimidating to me, so I chose the sidecar! There are speakers on each vehicle (much like the Incredible Hulk Coaster and Hollywood Rip Ride Rockit) playing the score from the Harry Potter films to fully immerse you in the experience.

What is Scary About Hagrid’s Magical Creatures Motorbike Adventure?

Okay, so we’ve covered some of the technical aspects of Hagrid’s Magical Creatures Motorbike Adventure, now let’s talk about what might be scary for riders.

Honestly, the queue didn’t really scare me. It’s very similar to Forbidden Journey and Escape From Gringotts in terms of the spook factor. If you survived the HP movies, the queue shouldn’t be a problem.

There are some darker spots in the ride, but no pitch blackness.

You might encounter some mist or fog on this ride, much like Incredible Hulk or Escape From Gringotts. As a germaphobe, I don’t love mist hitting my face especially since you’ll be inclined to wipe it away (avoid touching your face if you don’t want to get sick at theme parks!).

You’ll be racing around a small body of water throughout the ride. If being on a roller coaster near water makes you nervous, keep this in mind.

There will be a sudden vertical drop in the middle of this ride. You will be stationary at the time, and your car will drop 17 feet straight down and switch tracks.

You won’t see it coming (because of the misty fog), but you will speed towards a spike and ride 65 feet straight up at more than a 70-degree angle. Then, you will slide right back down (backwards). This is very, very quick and was more thrilling than anything.

While 50 mph isn’t breaking any speed records for roller coasters, this does feel faster than that. When you start to lose velocity, you hit one of those launch areas and speed up again. It’s smooth, but you will be bouncing side-to-side quite a bit, so if you’re prone to queasiness try our tips on fighting motion sickness!

Is Hagrid’s Magical Creatures Motorbike Adventure scary? Yes, but if you’re a fan of roller coasters and Harry Potter, you will absolutely love it! The theming is so incredible on this ride, you will feel just like you’re flying through the Forbidden Forest. It’s magical, exciting, and innovative, so if you get the chance, give it a try!

The Best Japanese Recipes You Need to Try Beyond Sushi