Lagoon is a pretty fun amusement park just outside Salt Lake City in Farmington, Utah. While I’d heard about it over 20 years ago before I left my hometown of Montréal, I’d never visited until a few years ago. There was a lot of hype about the intimidating ride that’s visible from the highway. Once through the gates, I found myself frantically Googling: “how scary is Cannibal?”

If I’d found the answer to this question, I wouldn’t be writing this post! And, to be completely and totally honest, I wasn’t brave enough to ride Cannibal the first two times I went to Lagoon. Currently, it’s our home park while we are living in Idaho. So, fortunately, I had the opportunity to build up to getting in line. I’m glad I did.

Where is Cannibal? Drive along the I-15 Veterans Memorial Highway in between Salt Lake and Layton, and you’ll definitely see it! With the gorgeous Wasatch Mountains in the background, you’ll see a tall brown tower with a wild red track protruding. 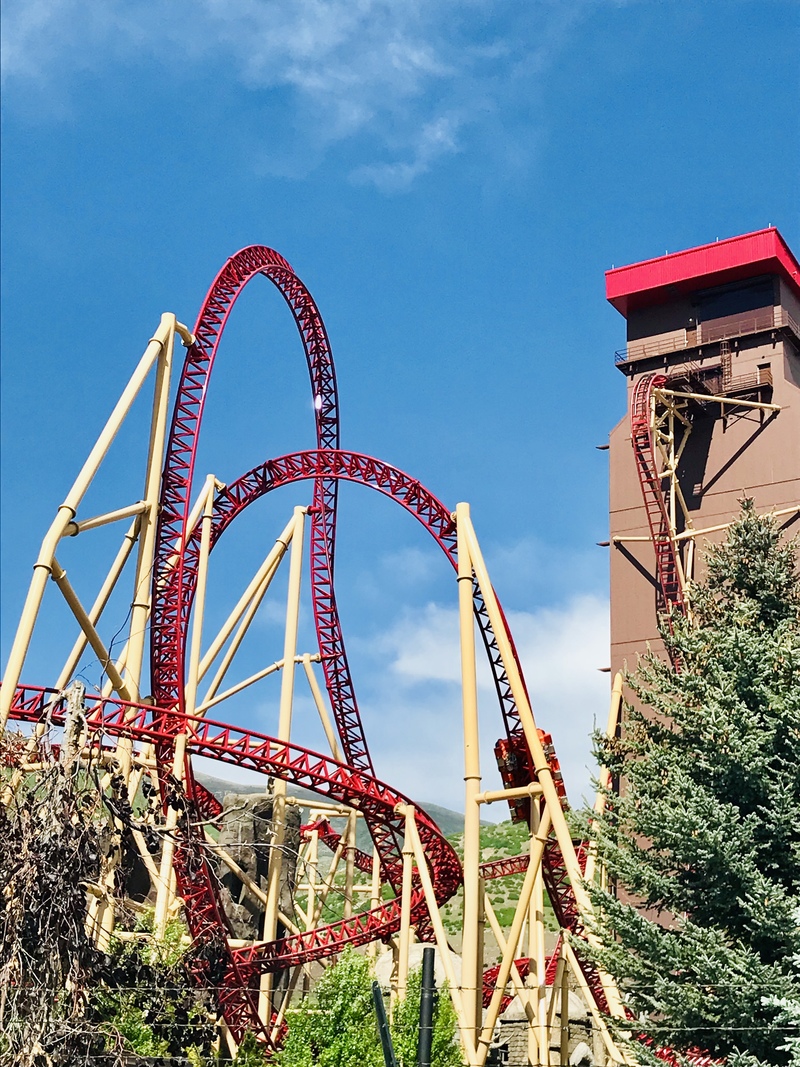 We like to sit in a window seat in the Panda Express across the highway at the Station Park mall and watch trains full of riders plummet down that first drop. THAT is how tall and imposing Cannibal is. The ride closes sometimes for maintenance or weather, so this is also a perfect lunch spot outside of the park when watching for reopenings.

Is Cannibal a Roller Coaster?

Yes. Cannibal is an extreme roller coaster. It’s very unique, though, and that’s largely because most of it was designed, engineered, and manufactured in-house at Lagoon! We had the chance to meet with the lead designer’s daughter during a hosted visit to the park, and it was fascinating to hear how this incredible ride came to exist!

Rather than outsource, like most other parks at the time, Lagoon made the rare decision to complete nearly 75% of the project themselves. As a result, park goers get a one-of-a-kind experience. Cannibal is very smooth and incredibly cool. It’s a little on the shorter side (not counting lift time), but it deserves the hype. We just wish there was an on-ride photo!

Here are some quick facts about Cannibal:

The theming for Cannibal is kind of all over the place. It doesn’t feel very cohesive, to be honest. The queue is mostly outdoors, and there have been many times when the strong sun and dry, desert heat felt like more than I could endure. 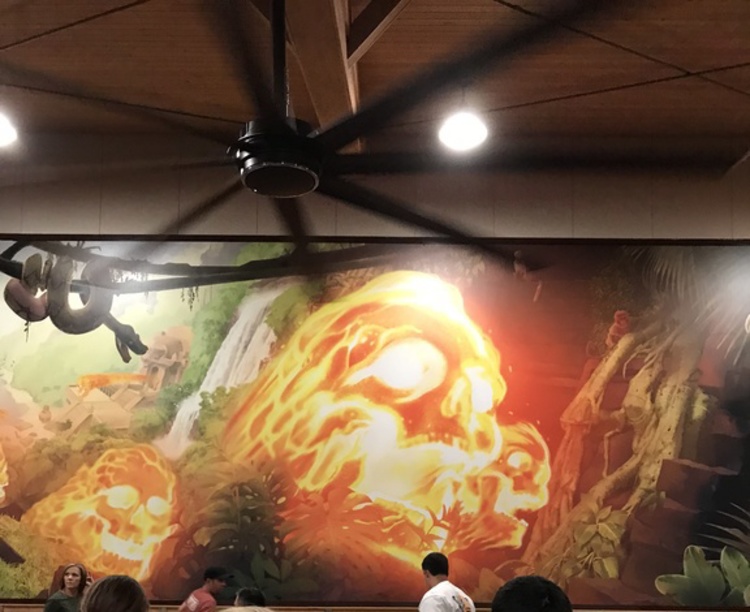 The loading area for Cannibal is pretty small and cramped. There is a spot off to the side for ride swap, though. There are no shoulder harnesses on Cannibal. The seats are equipped with just lap restraints.

Is Cannibal at Lagoon Scary?

How scary is Cannibal? Cannibal is a very scary roller coaster. We’ve become dedicated roller coaster enthusiasts — there’s almost nothing we won’t ride (or haven’t ridden) — and we still find Cannibal very thrilling. We rode this once with a stranger who had never been on a roller coaster before. We recommend building up to this level of roller coaster!

As mentioned, the queue is mostly outside of the building. You can watch the trains from the ground, but there’s nothing really scary about it unless you count the threat of heat exhaustion. You’ll also see signs that say things like “Cannibal will eat your phone,” warning people to secure their belongings (there are lockers). 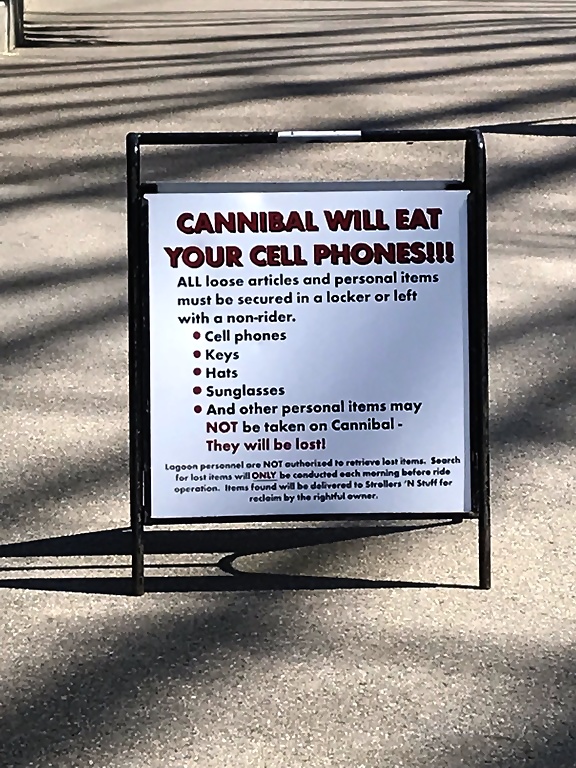 Once you get closer to the loading area, though, you’ll hear the jungle-type drums that play during the beginning of the ride. I’ll admit, that made me nervous. It definitely adds to the build up.

The trains on Cannibal are only equipped with a lap bar. No shoulder harnesses or seat belts. They are really nice lap bars, though. They are very wide, kind of staple your legs down, and they are like a rubbery material.

That said, I’m somewhat of a plus size person and I worried that my restraint wasn’t ratcheted down enough (it was). You also can’t access your pockets or anything once the lap restraint is in place.

As soon as the riders are secure, a curtain will rise to the sound of a conch. It’s a lot, guys. I’m not going to lie. This first time I did this, I thought I was about to die. Then, the car moves into a short, dark tunnel leading to the lift.

As you ascend on this elevator, you are going to feel wobbly as hell. The higher you get, the more dicey this feels. Don’t look up unless you want to see another train making its way down as it returns to the loading area. This scared my poor daughter because I was an idiot and said, “look up!” Sigh.

Once you reach the top of the lift, another curtain will rise. Slowly, your train will move out onto a small platform. Appreciate the view of the highway. The cars are gonna look tiny from where you are. The train will pause at an angle at the top, allowing you to feel like you’re about to go down but teasing you for a couple seconds. If you’re wondering “how scary is Cannibal?” This is as scary as it gets! The beyond-vertical 116 degree drop is madness, guys. Oddly, I prefer it to a 90-degree drop, but with only lap restraints, it feels like you’re being poured out of a bucket. By far, this is the scariest part of riding Cannibal for the first time. You have to get used to how “loosey-goosey” the lap bar makes you feel during extreme elements on this ride.

There are four intense inversions on Cannibal. Here’s the list:

The Immelman loop is unreal. You feel like you are flying, but it also feels like this loop lasts forever. It’s huge. So, that could be scary. The Lagoon roll is another one of those elements that is made scarier by the loose-feeling lap restraint. It feels like you’re upside down for 12 years, so it’s not like this goes by quickly.

Immediately following the Lagoon roll, the trains speed up and go through a tunnel. There is a man-made waterfall connected with this element, and you may be misted by water. 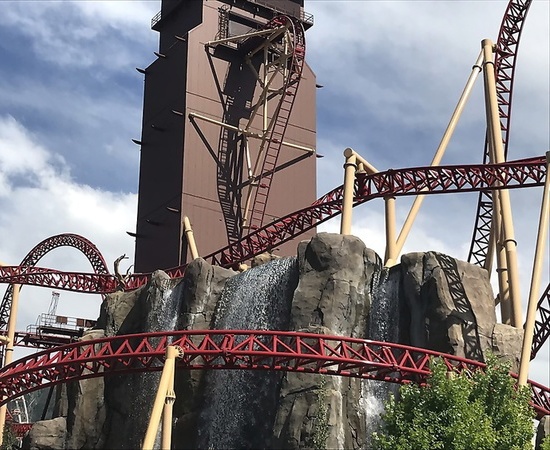 You won’t get drenched, but you might get damp which some people might dislike (especially on a cooler day). Also, I personally really hate the feeling of water spraying on my face for so many reasons, so I wish I could just eliminate this part of the ride (or make it fire haha).

Cannibal has a max speed of 70 mph, and it feels that way. It’s definitely not the fastest ride I’ve been on (Top Thrill Dragster holds that special part of my heart), but it’s not slow. It feels true to the listed speed, but combined with the big elements, that can be terrifying.

It’s worth noting, though, that Cannibal does not sustain those speeds for the entire ride. You’ll slow down during inversions and there are break runs (particularly the one right before the Lagoon roll where you slow to a crawl). Unless you’re really scared, the speed on Cannibal should be tolerable.

The very first time I rode Cannibal, I ignored all of the signs about losing items on the ride. I chatted up a stranger who tried to help me overcome my fears. She told me to take my glasses off because they might fall off my face. I won’t tell the whole long sordid story, but I will say that I listened to her and lost my glasses anyway. I could barely answer if someone asked: “how scary is Cannibal?” I couldn’t see! SHOUT OUT TO LAGOON FOR FINDING THEM, THOUGH!

Here’s my advice — keep your glasses on! Unless they are loose-fitting or sunglasses, you should be just fine. Anything else should go in the lockers. Josh wears cargo shorts with pockets for our theme park adventures, and they are perfect for storing small items if you want to skip the lockers!

There are so many things to love about Cannibal. The first is that this is a custom-made roller coaster, and you get that unique feel on this ride. It’s also very smooth!

My absolute favorite thing, though, is the beyond-vertical drop. I’ve been on others (like Takabisha at Fuji-Q Highland), but the drop heights are shorter. Heading into a 116-degree drop from 208 ft is AMAZING, and you’ll earn major bragging rights!

Here are some helpful links for your next trip to Lagoon: