Electric Bikes Adventure: Best Things to Do in Vancouver, BC When we booked a trip to British Columbia recently, I was super excited to explore Vancouver together. Josh loves any opportunity to get up to my native Canada and I love being his tour guide. Plus, I’ve been wanting him to see Canada’s west coast, so we were thrilled to do this together! Once we got there, the weather was amazing and it was clear that the best things to do in Vancouver, BC could be found on electric bikes!

We discovered that our hotel, the positively stunning Fairmont Pacific Rim, rents out a variety of vehicle to explore the area. What did we find among the offerings? Some truly fantastic BMW e-Bikes! After traveling all morning to get there, we knew pedaling around the city would be a great way to shake off some travel anxiety and stress!

Before embarking on our bike tour of Vancouver, we needed to learn the basics. It didn’t take long for the bike butler (yes, they had a butler for the bikes!) to explain how to use the e-Bike. Within minutes we were wearing our helmets and on our way! We weren’t sure exactly what to expect, but the e-Bike is very user-friendly and intuitive. After a very small learning curve with the control unit, we were ready for a day of exploring Vancouver! 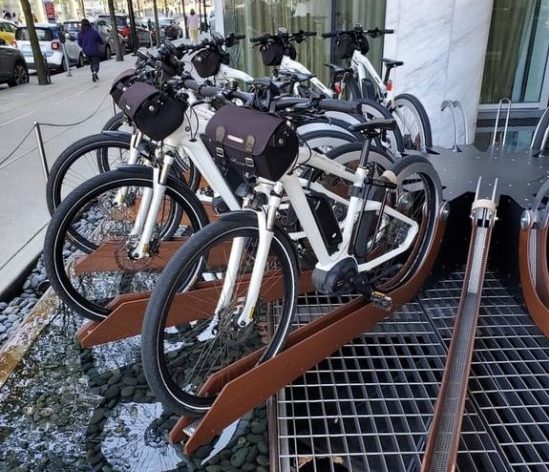 Here are some quick specs about the BMW Urban Hybrid E-Bike:

One of the first things we noticed is that the fat tires make this a smooth ride. It felt so stable! You can pedal normally and move on your own power just like a regular bike, but what’s the fun in that? We were excited to see what kind of power the electric motor would give us! While it was practical for maneuvering through crowded areas or crosswalks, we were curious about the kind of boost the BMW e-Bikes would give us. Let’s just say that it did not disappoint! All we had to do was push the buttons for more or less power, and the bike responded. Josh loved the Turbo mode, and it was easy to get over 20 mph without breaking a sweat. Fantastic!

The first stop on our bike tour of Vancouver shouldn’t surprise anyone who has visited the area. We were like kids in a candy store zipping around the bike paths in Stanley Park. It was so much fun! I’ve only driven through it, so it was an entirely new experience to ride along the seawall with the wind in our hair (okay, neither of us really has any hair, plus we were wearing helmets, but you get the point!). 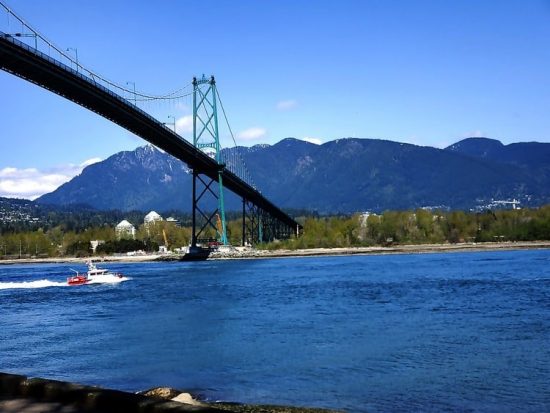 It was amazing to see seaplanes and cruise ships come and go through the harbour as we sped along, but we had to make a few stops along the way. Since he was a baby, we’ve read a book called Goodnight Canada to Caleb, which includes scenes of people riding bikes in Stanley Park and visiting the Totem Poles. He was so shocked (and jealous) to see our own pictures in those very spots!

We really pushed ourselves on this excursion and part of me was worried about the battery life on the electric bikes. The BMW Urban Hybrid E-Bike has a powerful motor and we experimented with hitting top speed a few times. Remarkably, we were able to get all the way around the seawall on a single charge without any signs of slowing down. It’s such an awesome bike! 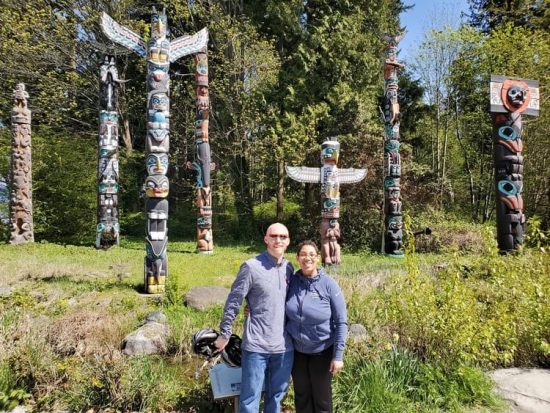 We also stopped for way too many pictures of the Lion’s Gate Bridge. In our defense, it looks so different from every angle. Plus, this was a great way to test ride the different levels of pedal assist. Maybe we gave in to our inner tourists, but we really had a blast on our electric mountain bikes! It’s worth mentioning that the bike handles worked well for my riding style. I was able to stay in an upright position while still enjoying a comfortable ride.

On our last day in town, we grabbed the e-Bikes again and made our way through Gastown and Chinatown. We prepared ourselves for lots of stop signs and heavy traffic. Normally, I’d also be intimidated by the steep hills, but pedal assistance made it easy! We made a few stops at the shops, and of course snapped a shot of the famous steam clock! Josh was a little nervous about leaving the bikes unattended (even though we were given locks!), so we didn’t check out any of the restaurants. Okay, we did stop at a Tim Hortons, but who can resist that!? 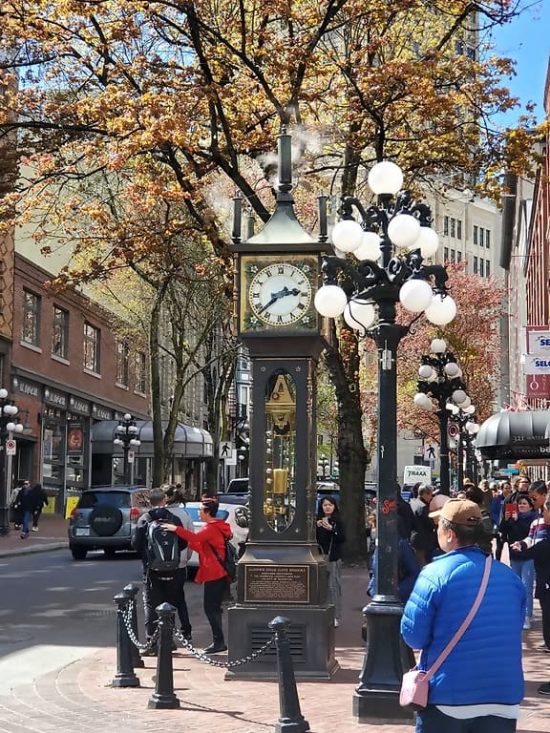 We didn’t have to bike very far to find one, of course, because there was a Tim Hortons every few blocks. Sigh, I miss that about Canada so much! Using the locks provided by the hotel, we secured our bikes and had a quick lunch at Timmy’s after working up an appetite. It was our last visit to a Timmy’s in Vancouver (unless you count the airport!) so we took our time and really enjoyed it. 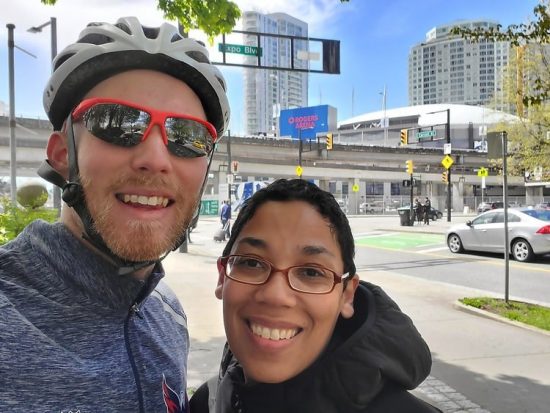 As hockey fans, we coulnd’t do a bike tour of Vancouver without seeing Rogers Arena! Neither of us loves the Vancouver Canucks (okay, we hate them!), but it was still cool to see the place. One odd thing? There’s a Costco right across the street from it. The traffic getting in and out of that parking lot must be terrible! Fortunately, whether you’re using a traditional bike or electric bike, it’s really easy to navigate the area (especially with all the bike lanes)!

As a Canadian, I was super proud to watch the 2010 Winter Olympic Games in Vancouver. We were living in Calgary at the time, and I even bought an official jacket. I am not ashamed! Anyway, it was super cool to look down from our hotel at the Fairmont Pacific Rim and see the Olympic Cauldron (torch) from our window. Naturally, we had to make our way down there!

Located at the Jack Poole Plaza in Burrard Landing, you’ll have to stop by if you’re planning a visit to Stanley Park. There are several restaurants nearby, but it’s also great for bringing a lunch and just sitting outside. It famously malfunctioned during the Opening Ceremonies (one of the arms wouldn’t come out of the ground!), but it was perfect when we were there. So cool!

We didn’t get to see and do everything we wanted to on this trip. Having lived next door in Alberta, this was not my first time in Vancouver (and I hope it’s not my last!). The area has some well-known tourist attractions and notable sites. Here’s a quick list of things you can do (including some we’ve already mentioned) to fully explore Vancouver:

If you’re a sports fan and you happen to go during the right time of year, you could also check out an NHL hockey game (even though we are not fans of the Vancouver Canucks!) or a CFL football game (the local team is the BC Lions).

The BMW Urban Hybrid E-Bike offers a fun ride that requires a lot less effort than regular bicycles. On our very first ride it was clear that this was a high quality electric bike with a lot to offer. We were able to explore Vancouver and enjoy the great outdoors at a high speed without feeling completely exhausted. We could pedal and get a workout when we wanted to, but could take advantage of the assist mode when needed.

While we don’t have enough experience to say whether this is the best electric bike, we know that commuter bikes are becoming more and more common in the United States (it’s something we love about Japan!). If you can find one with a strong rechargeable battery, front basket, and rear rack at an affordable price, it might be your best investment.

We bounced on those bigger tires in various weather conditions along bike paths and road trails and we had the best time. If we lived in an area where drivers were more willing to share the road with bikes, we’d probably get one. Relying on electric energy instead of a gas-powered vehicle can go a long way towards reducing our carbon footprint, and this is something we care about.

We’ve said it once and we’ll say it again — if you get the chance, explore Vancouver! There are so many incredible things to see and do, and we barely scratched the surface in this blog post! We feel so lucky that we were able to go up to the nearby Tantalus Range where we literally climbed a mountain!

The thing we love best about Vancouver is that it’s a city that caters to people from all walks of life. It’s multicultural and modern while offering all of the things you’d want in a big city, but it’s also a hub for sustainable, organic living. We couldn’t love it more. We can wait for the next time that we get to explore Vancouver!

wow nice article, love to read. bike exploring is one of my adventure thing. Mostly I visit by exploring on bike cause it is less effort then walking and can explore more place then walking.