How to See All Four Disney Parks in One Day Before we dig into this, I need to make a confession — I’ve fallen out of love with Walt Disney World. This is a topic I’ll probably need to tackle in a post at some point. For today, I’ll just say that my need to spend hours and hours in each park has ended which is why I can easily see all four parks in one day.

The price of Park Hopper Passes and Single Admission at Walt Disney World gets higher every year. It’s expensive for families to visit Magic Kingdom, Epcot, Hollywood Studios (and Star Wars: Galaxy’s Edge) and Animal Kingdom. We share tips on how to see all four Disney parks in one day!

On a recent trip, we took our four-year-old to Magic Kingdom, Epcot and Hollywood Studios, and even though the snacks at the International Food & Wine Festival were tasty and Star Wars: Galaxy’s Edge was cool, he genuinely asked if we could go back to Universal Orlando Resort.

That being said, if you’re like us and don’t need to inspect and ride every little thing, you could easily see all four parks at Walt Disney World in one day. Here’s how!

Choose Your Time of Year Wisely

You won’t stand a chance if you go in the summer, so if you really want to see everything in a day, pick the off-season. We like to go in September and October because the crowd size has dropped, but the weather is still decent. Another great time would be April and May for similar reasons.

Of course, you could also go in the winter months but it’s pretty chilly. The upside is that the crowds will be at their lowest in January and February, so if you’re okay with packing a jacket, then this could be the best time for you.

Get really, really specific about which rides are important to you and your group. There are so many attractions that don’t really live up to the hype or simply aren’t necessary on every trip. You need to be picky because the lines can get crazy long. Is it worth waiting three hours in line for the Snow White Mine Train? Not for us!

The thing is that, while you can use the FastPass+ system, Disney doesn’t sell Express Passes that let you skip the line on all or most of the attractions. And now that they let people book their FastPasses months in advance, the selection is limited. Most of the time, you’ll probably have to wait in line so be absolutely sure that it’s something everyone wants to experience. 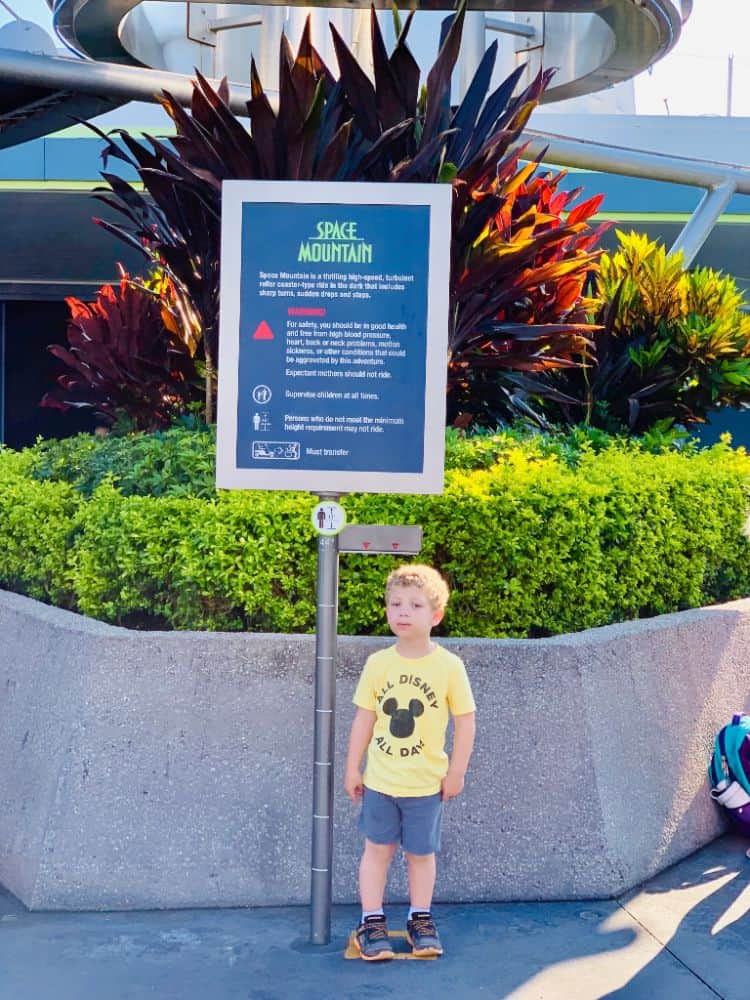 One last thing about this — please check the height requirements to make sure your child is tall enough to actually get on the ride! We saw many, many devastated kids at the parks and even our own son was disappointed that he couldn’t get on Space Mountain. The measurements might also be different from what you’ve seen at your doctor’s office also, so keep that in mind (it happened to us!).

Once you’ve identified which rides you want to tackle, come up with a plan of attack. We absolutely love Undercover Tourist. We’ve used that site every single time we’ve planned a Disney trip with our kids. It’s even easier than ever now. Just download the app and customize your day based on your preferences and suggestions from the site.

Don’t worry if you start rethinking your strategy or someone has a last-minute stroke of genius. It’s super easy to modify the plans. If anything changes, you can quickly update your day plan in the app. While there are some premium features, we’ve always stuck to the many free tools on the website with great success! Definitely check it out!

There’s often something being built or renovated at Walt Disney World. If your goal is to see all four parks in a day, make sure that everything is actually open. The last thing you want is to have your heart set on riding It’s a Small World and you get there only to discover it’s being updated.

On top of that, if there’s heavy construction going on, it might impact how quickly you can get around. Are there bus detours? Are all the stations operational? Have things been relocated to accommodate crews? Know before you go!

Josh collects Starbucks mugs and he really wanted the one from Epcot to complete the set. Sadly, it closed for construction three days prior to our arrival. The items were not moved to any of the other Starbucks locations. It was pretty disappointing.

Eat on the Go

If you want to do all four Disney parks in one day, you won’t have time for a sit-down meal (unless it’s a nice, big breakfast BEFORE the gates open!). You’re going to want to eat on the go as much as you can, which might mean nibbling on snacks from your backpack on the bus or monorail. We got so lucky last time. Josh’s grandmother had some bananas, and Caleb gobbled them up.

Considering how many times we’ve seen bananas at the finish lines of marathons or races we’ve run, we know they’re the PERFECT food for replenishing reserves and keeping up our endurance. Still, if you want something more substantial, you’ve got plenty of options at Disney. Take advantage of mobile ordering from the My Disney Experience app so that you can just pick up your food at the counter. Yes, you can skip the lines! Then, end the day at a sit-down restaurant and enjoy a well-deserved meal.

Pro tip: If the International Food & Wine Festival is happening, close out your day at Epcot and just do the one-mile lap around the lake and enjoy food from countries around the world. That’s what we like to do!

We just touched on this but I want to take a moment to talk about transportation at Walt Disney World. To get between the parks, you can take the monorail, buses, and the new Skyliner gondolas (yes, there was an incident right when it opened. Sigh). We’ll readily admit, though, that the transportation situation at Disney has been a source of frustration for us and it’s cost us valuable time.

The Disney Tourist Blog has great tips for saving time, but I’ll just say that, even if you’ve been to Disney before, double check your planned route. We were surprised to learn that we couldn’t take a bus to Epcot from the Magic Kingdom, for example. Instead, we had to make our way back to the main gate by monorail, switch lines and then take the monorail to Epcot. It just didn’t make sense to us. Pretty annoying.

And, for the love of all that is holy, avoid taking the ferry if you’re in a rush. In fact, unless you really, really want to take a boat ride, skip this thing entirely. It takes FOREVER if there are crowds (especially after the fireworks), communication is terrible, and everyone gets super cranky. Even if you decide it’s taking too long and you want to leave the line, it’s really difficult to do. We felt trapped the last time we queued up, and we’ll never do it again (it took a whole hour just to get on the ferry!).

The Florida heat can really sneak up on you — just look at my face and neck in the picture of me feeding Caleb the banana. I’m sweating like a pig! It doesn’t take long to feel the unfortunate effects of dehydration, either. This can be particularly tough on small children, especially those who are too young to ask for water and may not even realize that they are thirsty.

With all the deals and displays around Walt Disney World Resort, it’s easy to get sucked into the trap of loading up on soda. Please avoid doing this! Sugary, carbonated drinks are not the best for staving off dehydration, but if it’s all your kids will drink, it’s better than nothing.

Many of the restaurants sell juice, and while it’s not much better, there are some nutrients in a juice box. If you can, though, stick to water to hydrate your body. Bring a water bottle and sip throughout the entire day. If your kids say they don’t want to drink, TOO BAD. If they want to keep adventuring, they’ve got to have a sip or two whenever water is offered. Set a good example by taking a swig every half hour, at the very least. You’ll all feel a lot better and you’ll need all your strength to see all four Disney parks in one day!

Stay at a Disney Resort

I’m not a big fan of the Disney hotels, but lots of people love them. For someone like me, who lives and travels with OCD (obsessive compulsive disorder), the rooms are too well-used. Don’t get me wrong, this is perfect for families — but kids are really rough on hotel rooms. It’s just not a good fit for me. Truly, it’s a me problem.

One of the perks of being a guest of Disney Resort and a few other hotels is that you can spend extra time in one of the theme parks every day. That’s a big deal if you’re trying to see all four Disney Parks in a day! If you’re interested, these are the properties that provide this benefit:

You can choose to visit the Disney parks before it opens or after it closes with valid theme park admission and hotel ID (bring your room key!). For more information on participating parks and times, click here.

Keep Your Car in Mind

Staying at a Disney property might make your goal easier because you won’t have to battle the parking lot and you can take advantage of that extra hour! If you drove, however, you’re going to want to choose where you park wisely. Common sense says to park where you plan to start, but that’s not always the right choice either. 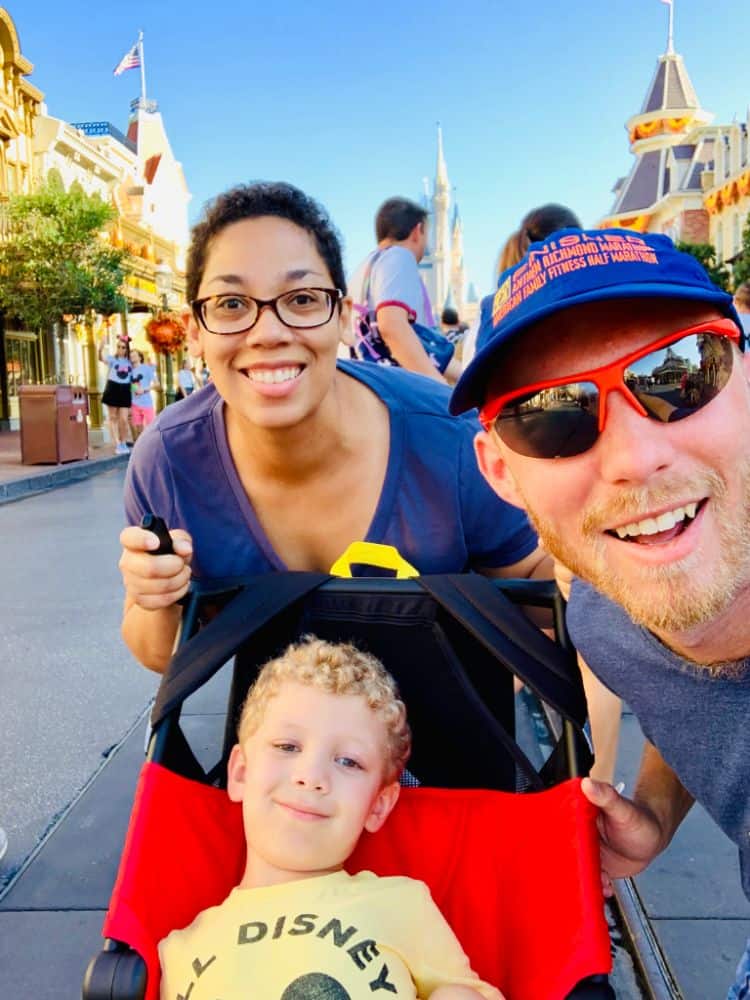 Our strategy is to start with the busiest park (Magic Kingdom), so why do we park at Animal Kingdom? Because it’s the least busy park. What that means is that there will be fewer people leaving from the parking lot at the end of the night. We’ll spend less time inching through the gates and more time in our beds back at the hotel. Sounds good to me!

I’ll probably keep updating this post, because I’m already thinking of more tips to share. In the meantime, here are some last-minute things to keep in mind:

Here’s my most important tip — are you ready? Don’t try to make this day “perfect” for your children! Most small kids don’t care about getting on every ride. I’ve seen kids have more fun playing in the grass as their parents stress out about hitting everything on the checklist.

Our little guy did very few rides at Disney, and really enjoyed just looking around at everything. If you’re in line all day, they might miss the magic that we adults too often overlook. Let them linger, let them just stand and look around, and let them say NO to rides.